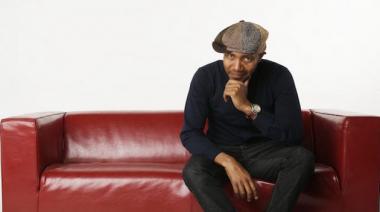 Paul Miller, best known as DJ Spooky, is a composite; a multisensory communicator of sound and sight in the digital era.

Fifty years after the first keystroked “L-O” signaled sound transmitted on the internet — the word “LOGIN” cut short by a computer crash — the composer, writer, collaborator, and multimedia artist brings to Yerba Buena Center for the Arts on January 25 the world premiere of Quantopia, a musical portrait of network evolution. The one-hour, three-act work was commissioned by the Internet Archive and created with funding Miller received from a Hewlett 50 Arts Commission from the William and Flora Hewlett Foundation.

Miller’s works most often address cultural, environmental, and societal issues and have been presented at the Whitney; Metropolitan Museum of Art; Ludwig Museum in Cologne; Kunsthalle, Vienna; Andy Warhol Museum in Pittsburgh, Miami/Art Basel fair, and other museums and galleries. An author of four books, Rhythm Science (2004), Sound Unbound, (2008); The Book of Ice, (2011); and The Imaginary App, (2014), his essays and articles frequently seek to establish linkages between contemporary thought, technology, and acoustic and digital sound worlds. Collaborations have led to residencies at national and international universities and think tanks and to projects with Kronos Quartet, Metallica, Chuck D., Steve Reich, and Yoko Ono, among others.

Amplifying the small, invisible world of digital data into a whole world, experiential audio and visual experience, therefore, is Miller’s thing. It arrives with a goal well-suited to his barrier-resistant wheelhouse: lending — and reminding us of — our humanity during a data-driven revolution and the internet’s ongoing evolution. In a phone interview, Miller speaks on the project’s implications for classical music and future storytelling in sound.

Tell us about the project’s arc. How have you addressed the integrations and separations that distinguish the DJing/electronic, vocal and string elements explored in Quantopia?

It’s funny, all of composing is about selection of notes. The name, “Quantopia,” and overall project is a contraction of “quantification” and “utopia.” [Miller points out that fascination with and the study of utopia dates back to Ancient Greece philosophy and the 5th century B.C.] It’s a strange narrative Plato was trying to work out, but oddly, it’s part of the internet universe too. I wanted to reflect on that in sound: with a mirror held up to a world that’s radically changing. 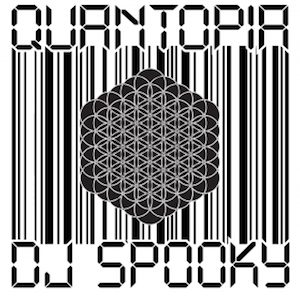 DJing is the collecting of archival works; it’s about collage and appropriation. You’re always dealing with a collection of material. [Mezzo-soprano] Eve Orenstein sings binary code, so you’ll hear zeros and ones. I run voices reciting the Universal Declaration of Human Rights broken into code through a compiler. The internet has a powerful way of showing how we look at identity. I think of it as an infinite chorus: every YouTube file, the vast data the internet represents, it’s all there to include.

Meredith Monk and Phillip Glass are influences on my work, but Steve Reich is more the mentor for Quantopia. In what way? How he breaks components into small fragments is a precursor to my work. Reich’s work is a foundation for the sound and data-as-sound included in this piece.

The women’s chorus resonates for me; because women are a reflection of possibility. Likewise, the internet is a reflection of potential. Where guys’ voices tend to be based on being defined, assertive, certified, women’s voices [are different]. When you’re sampling — in electronic new music and in hip-hop — you’ll notice a lot of women’s voices. It works sonically and fleshes out the piece. With Quantopia, I wanted to give a sense of openness, as opposed to assertiveness.

This is a one-hour, three-act work: What can you say about the work’s architecture and style, especially in terms of your approach to acoustics and silences, tempo and rhythms, the balance of voices, and the use of words/lyrics versus notes?

I was interested in approaching this from the point of view of density. If you think of it as a 4G LTE signal, using WhatsApp or encryption, once sound is digitized you can do anything with it. This work is package switching, a statistical model, an acoustic portrait of the internet. The internet is an intricate, complex mechanism that’s the largest thing on earth. That’s a starting point for it, and the rest falls into pattern recognition. Sonically, I want people to fall into the piece, so it’s more lush than other works I’ve done.

Architecturally, if you look at windows in a building, you can say they are the absences in a structure. That’s the way I use music: it’s a latticework [of absences and structures]. You’re looking at complexity and pattern recognition.

If there are central themes beyond the overall expressions or statements about data and its quantification in the digital age, what are they?

African-American culture is one of the traditions I’m coming out of. The African-American human voice had to engage with expression based on suppression. If you spoke in your own language or rhythms, you could be killed by your slave owners. These are the things I am responding to.

[Janelle Monáe’s] Dirty Computer album and other albums like it, I chuckle over them because they pave the way, but in classical music, there haven’t been these issues covered.

Classical music is a lot more conservative than it wants to admit to. I’m like the insurgency here: I’m pulling together unexpected worlds.

It’s about synthesis. That’s where the quantified self is: in a lyrical representation of the data that represents you. It’s an eerie portrait of what you are and what you do. How do artists think of that as songwriting material? It’s an acoustic essay.

Starting from data as a source lent what freedoms and what restrictions to your creativity? Did it provoke steps you’d not taken before or cause you to search for sounds you wouldn’t otherwise have explored? Did the focus on translating algorithms into sound reduce or eliminate spontaneity in the composing process?

Is data-based work more limiting or more opening? The interesting thing is that most Western, whole-tone tuning systems are derived entirely from mathematics. It’s at the heart of human expression: that’s why I worked in this project with a data specialist.

The internet makes a lot of noise that our ears aren’t ready to hear. In an urban environment, a city, think about the hums in electric cables. The data running through those cables makes noise. It’s post-industrial sound: we’re not even aware that we’re surrounded by these ambiences that influence everything.

Please tell us more about Greg Niemeyer: What role did he play, in what ways did his input influence the score?

Everything in the internet era has the air of an unfinished work. If you’re an artist today, you have this digital anxiety that nothing is ever finished. You can constantly resample, revisit new works. These are things that go through my mind. Greg is doing visuals and Roger works with the data. Neither the visuals or the acoustics stay still in Quantopia. With Bach or Beethoven, you play the same notes for centuries. But with the internet, it’s unfinished. How do we make work that reflects that in sound and image? Greg is answering that in collaboration with me.

If there’s political messaging or a counter story to social media’s ability to erase or blur data, facts, figures, objective science or in other ways alter reality to serve alternative propaganda and agendas, does this work speak to those issues?

What I can say is it’s an incredible year of narratives. On top of that, you wonder how to build human connections. That’s what this project does.

Last question: You’ve written a number of books. Are you working on a new one?

Yes, I’m working on the next book that comes out in 2020. It’s titled, Digital Fiction: The Future of Storytelling, released by Duke University Press.

The heralded composer’s much-anticipated premiere was just one gem in a dazzling evening of sonic and temporal connections explored by Pablo Heras-Casado and the S.F Symphony.