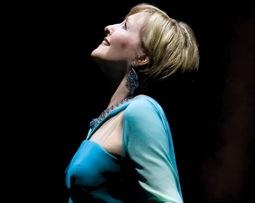 Flicka Brings It Back Home

Mezzo-soprano Frederica von Stade needs no introduction: Copious documents of her 41-year career proclaim her greatness, most recently on priceless CD reissues from Sony/ArkivMusic and EMI. In preparation for her April 12 master class at the San Francisco Conservatory of Music, she reflects on her new career path and the triumphs of the past.

Let’s talk about your new role as Nana Flicka.

Boy, can I talk about that. Little Charlotte Frederica was born to my daughter, Jenny Rebecca, last June. She’s almost 1. I’ve been every month to see her, for about five or six days. I’m “Nana,” and I absolutely love it!

When you teach your master class at the San Francisco Conservatory of Music, will you be Frederica von Stade or Nana Flicka?

Kind of a combination. Sometimes my Nana instincts are as good as my musical ones, or even better. And dealing with big kids or little kids is the same thing: You just wanna help them grow and love what they’re doing and be good to themselves.

An Evening with Frederica von Stade

Master classes are hard because they’re a performance for the person giving them, and that’s not always in the best interest of the kids. So I do more of a sharing. They all have teachers and coaches who give them the absolutely necessary things they need to know. All I can really give them is what I see, what I hear, and what I think they should do or how they might think about something or consider something.

The big assumption is that anything I say can either be put in that magic garbage pail or retained as something perhaps useful. I’ve experienced so much, both wonderful successes and failures as well, so I can share information from my experience.

What will you do in your master class?

I’ll start with a little mini-talk. We’re all trying to learn to sing. I’m 40 years older, so I have a different set of problems, but we’re all activated by the joy of singing. The only separation between us is one of age.

Then, if there’s an audience that is not singers, I’ll say something about the voice and the complications and why it’s so hard. Then I’ll have them get up and sing. If I notice things about what they’re doing — sometimes kids use their hands too much, or they get tense on top [of their range] or look scared on top — within reason I’ll ask them to repeat certain things or do some exercises that might help them.

There’s no way you can totally help a kid in a public situation, because they’re putting themselves in a very vulnerable position. I believe in them, because it gives them the experience of performing. They all have perfectly fine teachers to teach them how to sing and when to take a breath. All I can tell them is, you know, “I did this role, and I had the experience that you’d better lighten up for the first two acts because you’ve got a heck of a third act.”

You haven’t become a voice teacher at this point, have you?

No, no. I never will be a voice teacher. I don’t have the gift or the ear. I do teach singing, but more group singing, in St. Martin de Porres School in Oakland. But I’m not their main teacher.

I love working with little kids, and I love St. Martin de Porres because my whole theory is that something is better than nothing. These kids might otherwise not have music in their life in any way. The kids that Marilyn, Renata, and Kiri work with are almost professional, so it’s a very big responsibility. I just don’t feel I have the gift to help them get better. I know a lot, but it’s a very different thing to able to pass it on and be sure when they’re getting it or not. We now have four kids in the YMP [Young Musicians Program]. ... If even 10 of them get through before I leave the planet, I’ll be happy.

In the April Opera News, J. D. McClatchy contributed an engrossing essay, “The Performance I Can’t Forget.” He says these wonderful things about you: “The Cherubino that night [at the Metropolitan Opera in 1976] was Frederica von Stade. I will never hear a better one. Every facet of this complicated character, every bit of wit and delicacy in the music was there onstage …” Did your interpretation come from you, or from a director?

I had the best directors in the world for The Marriage of Figaro. Lots of the ideas came from them. Some of them were polar in their interpretations.

I don’t know if I’ll stop. I love singing recitals, I love singing with youth orchestras. I still love singing.I advise young singers to do what you’re asked, because you might be taken some place that you don’t agree with, but you’ll learn from it. I worked with Sir Peter Hall, one of the greatest Shakespearian directors of all time. I worked with Giorgio Strehler [the Met director in 1976], one of the greatest Italian directors of the Piccolo Theatre at La Scala, and a most brilliant director. I also did four of five productions of Figaro with Jean Pierre Ponnelle. I was taken to places I never thought I’d go, just by doing what I was told: following instructions, following orders, and making something work that isn’t totally my exact opinion.

One of your recordings that I can never get out of my head is “O, quand je dors,” which you recorded with Martin Katz just two days before the birth of Jenny Rebecca [Sony/ArkivMusic]. Your rendition is slower than most others I’ve heard, and you also change tempo in a lot of places. It’s exquisite.

Did your unique performance come from Marty, from you and Marty, or ...

Probably from Marty. He’s not only a great pianist, but also a great technician. And he’s absolutely committed, with all his might, to doing what a composer asks. So it’s probably doing what the composer wanted, following orders. I just did a concert with Kiri [Te Kanawa] in which she sang it, and the poetry is really exquisite. And it’s written by a pianist, so some of the accompaniment is just exquisite.

You’re beginning to sound like a very nice girl with an extraordinary voice who was a blank slate. I’m not convinced.

No, no, no. I love to perform. The older I got, the more I got the confidence and freedom to be me. But I really didn’t have to fight my way out of a bag. I was very lucky in that regard. I had a long time to prepare for being a busy, employed artist. I was able always to keep my eye on the ball and know what was important.

And I also failed. I had times when I really was singing awfully, and I had to get myself back. That took a lot of work and a lot of faith that I could get there. But I’m not a blank slate.

Like most artists, frankly, I have been given an extraordinary amount by agents, conductors, pianists, coaches, singing teachers, psychotherapists, massage artists — the director who makes you look good, the wig lady who makes you look not like an idiot, the makeup artist who makes you feel beautiful. These things contribute a lot more than people are aware. You are the culmination of an awful lot of guardian angels.

Singers don’t just go out and become superstars. There are many, many steps. While the gift has to be there in the voice, and the talent, we are a culmination — I am — of the great deal that I’ve been given and what I’ve had to learn.

You’ve done your last opera appearance, in Dead Man Walking in Houston. What about recitals?

I have about another year. I don’t know if I’ll stop. I love singing recitals, I love singing with youth orchestras. I still love singing. I won’t sing in New York, San Francisco, Chicago, or any of the big places. But Kiri and I were just in Tulsa, and I had the time of my life.

Obviously, my voice isn’t going to be what it was, but I have a whole lot more than just singing. There’s making a fool of myself, which I enjoy more than ever, and people like it. Kiri and I had a ball, and the public just loved it. We put together a silly program with some great stuff. I did a couple of arias, and the public adored our section of Jake [Heggie’s] music. He wrote us a marvelous duet. Kiri has much more going on than I do, because she was a bigger superstar. But both of us say, “Hell, if people ask us, we’ll do it.”

Are you giving a lot of that money away to the charities?

Very often I give my whole fee, because it’s better for them to send a check directly to my charity so that nothing is taken off first for taxes. It goes to the Young Musicians Program at UC Berkeley, the music programs at St. Martin de Porres school that I helped start and continue to assist as a part-time volunteer teacher, and the two kids that [my husband] Mike and I are helping put through St. Joseph’s High School in Alameda. We have one now, and her sister is following. These are kids I’ve known since they were 4 years old. I’d like to see them through for another seven years.