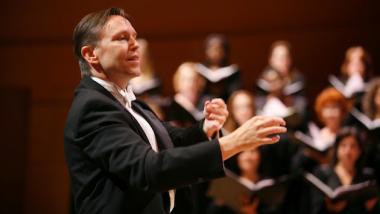 Grant Gershon May Be the Hardest Working Man in Choral Conducting

James Brown used to proudly proclaim himself “The Hardest Workin’ Man in Show Business.” At the moment Grant Gershon could give him a run for his money.

Simultaneously Gershon (who became music director of the Los Angeles Master Chorale in 2000) prepared 21 members of the chorale for a Sept. 13 (revival) performance of Orlando di Lasso’s Lagrime di San Pietro originally directed and choreographed by Peter Sellars for the Ravinia Festival outside Chicago. He has prepared the Los Angeles Opera Chorus for Saturday’s gala opening production of Verdi’s Don Carlo. Then on Sunday he will conduct the Master Chorale’s opening concert featuring the Mozart Requiem with Shawn Kirchner’s Songs of Ascent.  At the same time, he is deep in preparation to conduct Los Angeles Opera’s upcoming production of Philip Glass’s Satyagraha (in Sanskrit) directed by Phelim McDermott, which opens on Oct. 20.

Either Grant Gershon has a self-portrait that is rapidly aging somewhere in a locked closet that allows him to maintain his boyish good looks or he’s borrowed a “time turner” from Hermione Granger. He apparently thrives on the challenge, gaining strength, he says, from the variety each project offers.

A native Angelino born in Norwalk in 1960, Gershon attended Chapman College with a double major in piano and voice. After transferring to the USC School of Music he graduated in 1985. Since that point he has played a pivotal role in the orchestral, choral, and operatic evolution of Los Angeles — as piano soloist, guest conductor for the Los Angeles Philharmonic and Los Angeles Opera, and now for 18 seasons as director of the Los Angeles Master Chorale. Factoid: He was also one of the two rehearsal pianists (along with Gloria Cheng) that prepped the L.A. Opera cast and chorus for the 1990 production of Nixon in China conducted by Kent Nagano.

Under Gershon’s leadership, the Master Chorale has become one of the most highly regarded and adventurous organizations in the city. Their programs are noted for consistently pushing the creative envelope by commissioning and premiering works from a wide demographic of composers. Gershon has championed the choral music of Steve Reich, John Adams, David Lang, and Philip Glass, while presenting works that represent the pillars of the classical choral repertoire.

We spoke recently by phone during a momentary break in Gershon’s manic rehearsal schedule.

How do you view the progress the Master Chorale has made since you became music director?

I think the Master Chorale has risen both in terms of quality and adventurous. I can’t believe I’m about to begin my 18th season. I inherited a group that had already established a strong tradition. [The organization was founded in 1964 by Roger Wagner]

As the city of Los Angeles has grown artistically, I think the Master Chorale has played a leadership role along with the L.A. Philharmonic and L.A. Opera. We have a remarkably versatile talent pool in Los Angeles and the level of competition to get into the Chorale is extraordinary. That level of competition is something we have definitely seen increase over the past 10 years. The opening of Walt Disney Concert Hall (where the Master Chorale performs) also was critically important.

You’ve brought a variety of programming to the Master Chorale.  How would you describe your tastes?

I have very eclectic taste. Clearly we want to perform the essential masterpieces of the choral repertoire. [The Chorale will perform Bach’s Magnificat Nov. 17 and a candle-lit English Cathedral Christmas Dec. 2.] I also want to program new and unfamiliar works that might seem surprising at first glance, but have underlying thematic connections or reflect aspects of a related sonic palette.

Your opening concert, which will combine the Mozart Requiem with the work by Shawn Kirchner seems like an example of that.

The Mozart Requiem was the first major choral work I sang. That was as a freshman in high school (at the ISOMATA music camp in Idyllwild). It’s one of Mozart’s greatest forward-looking pieces. It’s being paired with a recently expanded version of Shawn Kirchner’s Songs of Ascent, which is a setting of psalms that were said to be sung by pilgrims journeying to Jerusalem. We premiered the work three years ago, and now Shawn has added three more psalms. Shawn was our composer in residence. He has an ability to write music that is immediatly appealing and also rewarding to dive into deeply.

Last season you prepared the L.A. Opera Chorus for the performances of Philip Glass’s Akhnaten. Now you are preparing to conduct Satyagraha. Talk about the challenges of preparing that opera.

Satyagraha is a big undertaking. The scale of the piece is truly epic. My preparation began at the beginning of the summer. I’ve also been reading the Bhagavad-Gita which is the source of the opera’s libretto; I think it’s essential to an understanding and appreciation of what Philip Glass and Constance De Jong were trying to achieve.

“Satyagraha” means “strength for justice through truth.” Gandhi’s movement represented the idea that the spiritual and the political could be aligned together as a movement for social justice through nonviolence and a basis for building community. There has never been a period when that wasn’t relevant. But today the opera [which premiered in Rotterdam in 1980] seems particularly relevant when truth is a very embattled concept. It’s also about being willing to put your life on the line. So doing Satyagraha at this moment seems particularly important.

Clearly performing an opera in Sanskrit presents a challenge unto itself. How have the members of the chorus and the singers been preparing?

The singers are working with a Sanskrit Master to understand the meaning of the text which they’re learning phonetically. One of my primary responsibilitie s— and in this piece more than almost any other repertoire — is simply making sure everyone is on track and knows where they are. That involves a certain amount of hand signals. The advantage I have is that I have been working with the chorus and the cast [some of whom have previously performed their roles] since the beginning and will follow right through into the performances. In this opera, building trust is so important.

The chorus plays a principal role. They appear in five of the seven scenes. I can’t imagine the concentration it takes to memorize this libretto. It’s definitely not your standard Verdi chorus!

What happens if someone loses their place?

Strongly cast, beautifully played and produced, the opening performance affirmed Nixon in China's standing as a musical and theatrical masterpiece and one of the great operas of the 20th century.