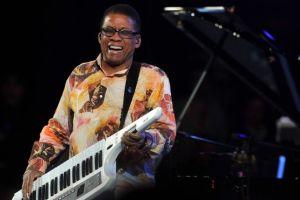 He made his major public debut at age 11, playing a Mozart piano concerto with his hometown Chicago Symphony Orchestra, and ever since then Herbie Hancock has followed a chimerical course to fame. It has meandered from mainstream to Latin jazz, on into the strange and heady brew of jazz and rock that became known as “fusion,” a high-powered hookup with hip-hop, and most recently to The Imagine Product, the title both of last year’s release on his Hancock Records label and of the group that he’s bringing to next month’s 54th Annual Monterey Jazz Festival. The album begins with the 71-year-old keyboardist’s new take on John Lennon’s anthemic Imagine and continues with other pop and world tunes, knit together by a suave jazz sensibility and an implicit, sometimes lyrically explicit, call for global understanding and for social and creative cooperation. Hancock spoke with SFCV from Switzerland, the day after his performance at the Montreux Jazz Festival in a tribute to trumpet legend Miles Davis, his former employer. (The late Davis and his arranger and friend Gil Evans will also be honored in a big-band performance at the Monterey Festival, separately from Hancock’s gig there.)

How did you celebrate Miles at Montreux?

It wasn’t my group, it was [electric bassist] Marcus Miller who put us together. Marcus realized that it’s been 20 years since Miles passed away [on Sept. 28, 1991, from a stroke, pneumonia, and respiratory failure], and he asked [saxophonist] Wayne Shorter and myself if we wanted to participate. And we thought we really wanted to do it in Miles’ spirit, since in all that work we did with Miles, we knew his stance on things. Miles was always looking forward. On the first day of rehearsals for the tribute, we didn’t play any music, we talked about Miles; we told stories about the kinds of things Miles was interested in, like boxing and cooking and women. [Snickers] He was also interested in mentoring youth. We were all in our 20s [in the early 1960s]. Miles was only in his 30s, but he had already accomplished so much: He’d done the great quartet, with John Coltrane, Red Garland, Paul Chambers, and Philly Joe Jones, and he’d already done Kind of Blue [Columbia Records, 1959], that formal way of approaching modality in music.

The common thinking is that Miles brought you guys on to help him get into rock ’n’ roll.

I don’t think he hired any of us for that purpose, not back in 1963. He hired Tony Williams because he was an amazing drummer, and Tony was 17, a child of the ’60s, listening to rock, but he was also listening to contemporary classical music, which I believe [saxophonist and composer] Sam Rivers and others had turned him on to when he was in Boston. It was a time of universal change, when young people were being recognized as movers and shakers in everything from rock to the avant-garde scene, which was underground in jazz but being touched on by some of the more traditional players. And it was a time of great curiosity, with Timothy Leary and psychedelics, Vietnam, social change, not only about discrimination against African Americans, but women were at the forefront of the antiwar movement.

How did it hit you personally?

I learned a lesson: Don’t form an opinion about something you have never experienced.At the beginning of the ’60s, I was very much a closed type of jazz musician who only paid attention to jazz and classical music; rock didn’t catch my ear at all. In addition to the impressionists, like Ravel and Debussy, I was listening to Stravinsky and Bartók. I hadn’t really paid attention to the real avant-garde, but once I met Tony Williams, he turned me on to Stockhausen and kind of opened the window to John Cage and more experimental writers like Steve Reich.

What did it was me noticing that Miles had album jackets of the Stones and Janis Joplin and Jimi Hendrix and James Brown and others, album jackets strewn around the room, on the floor, on his bed. But also [flamenco guitarist] Manitas de Plata and [classical pianist] Bendetti Michelangeli, Miles would listen to that. For me, Miles was the epitome of cool, so if the epitome of cool was open, then it must be cool to be open.

Did that lead you on to moving from piano to electric keyboards?

It was at one of Miles’ recordings. When I walked in, I didn’t see any acoustic piano in the room, and I asked Miles what he wanted me to play. He said [imitating Davis’ hoarse whisper], “Play that!” and he pointed to the Fender Rhodes electric piano in the corner. And I’m thinking, What, that toy piano? I rolled it over and turned it on, I played a chord, and I liked the sound of it! And I learned a lesson right there: Don’t form an opinion about something you have never experienced, or make your opinions based off what other people say. I also noticed that I could turn it up louder, so I could be as loud as the drums, and Tony wouldn’t have to tack down when I played keyboard solos. Of course, that influenced the music. ... I didn’t play a synthesizer myself till I did the Headhunters record [for Columbia, under his own name], and that was ’73, ten years after I’d joined Miles.

The fusion that Miles and the rest of you worked got you booked into rock venues and drew some new, young fans to jazz. You continued that sort of mission by integrating hip-hop techniques on your hit dance single “Rockit” [1983] and by reharmonizing rock material on New Standard [Verve, 1995]. Has it been good for jazz to reach out that way?

Absolutely! And the thing is, jazz wouldn’t have existed had it not been for the influences on it; from its inception it was already a hybrid. Jazz has constantly borrowed from and lent itself to other forms of music. Miles told us — he paid us — to try new things and do them on the bandstand, in front of the people. Because he truly believed in being in the moment, and that meant living in that moment, and expressing in that moment. So naturally, the things that have influenced us at any time have appeared in our music.

And that brings us to your latest, your Imagine Project.

Music is a way to win the hearts and minds of people.I was looking at the scene today, what’s happening in the turmoil that’s reflected all over the world. ... A lot of people seem to be laying down their lives to fight oppression and seek freedom. And we’re seeing some tremendous changes in the economic fallout from crazy activities happening in our banking industry and on Wall Street, poor people who’ve gone into tremendous debt by banks waving big carrots at them, trying to convince them that they can afford what they can not afford. For the first time, the average American is coming face-to-face with globalization, at his back door. My feeling is that it’s our own responsibility to become part of the process of creating the kind of globalized world we want to live in. And music is an example; it’s a way to win the hearts and minds of people. We live in an immigrant country, and so our ancestors are spread throughout the rest of the world — unless your name is White Cloud or Red Sand or something. So this is what I attempted to do with this record: If our roots are spread around the rest of the world, let’s reconnect those roots, and see what kinds of new ways of making new visions might be a result of collaborating with people from outside our culture.

The album features Indian, African, and Brazilian artists, recorded in several different places, and an all-star set of American pop musicians. How are you going to showcase all that at Monterey?

We’ll have a group that’s really pared down, compared to what you find on the record. I can’t bring all those people on the tour. We’ll do some things from The Imagine Project, and some [of Hancock’s jazz standards] that people might expect me to perform. If I don’t play Maiden Voyage or Watermelon Man or Cantaloupe Island, they get mad. We have a medley of things, where we do parts of Speak Like a Child, Dolphin Dance, and [Thelonious Monk’s] ’Round Midnight, with the chord changes I used in the movie. [Hancock appeared in French director Bernard Tavernier’s ’Round Midnight in 1986, as did Bobby Hutcherson and several other American jazz stars.]

You were dubbed a Jazz Master by the NEA in 2004. Can you comment on some of the other Masters emeritus you’ll be keeping company with at Monterey?

[Saxophonist] Sonny [Rollins] is the master, so to speak. He and [drummer] Roy Haynes are the only two I can think of that are historically influential jazz icons from the ’40s and still alive. And Sonny is extremely vital; he hasn’t lost anything. I first worked with [vibraphonist] Bobby Hutcherson at Birdland [in New York in the early ’60s], and he had a fresh approach to vibes playing that got even fresher. I got a chance to tour with him just a few years ago, and he was still amazing! His facility is flawless, his ideas are boundless, and he’s got this effortless way of moving, which just relaxes everybody. [Record producer] Orrin [Keepnews] was passionate about the music, totally into it. Today, that kind of person is fewer and further between in the music business.

I learned a lesson: Don’t form an opinion about something you have never experienced.