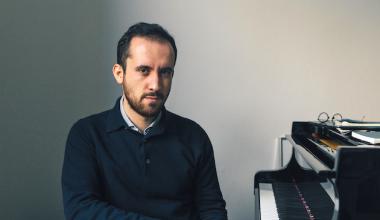 Igor Levit: A Pianist Reacts to Living in Interesting Times

Among the crop of celebrated young pianists today is Russian-born Igor Levit. Already building an award-winning discography, Levit has garnered reviews that suggest he is an artist of significance despite the fact that he is just now pushing 30 years old.

His current season has debuts with the Staatskapelle Dresden, and the San Francisco and London Symphonies. His upcoming recital debuts include Carnegie Hall and the Concertgebouw. An outspoken critic of the current U.S. administration as well as the right-wing movements across Europe, he has been known to read a statement of opposition to such things before he plays, and his Twitter feed is unambiguous about our “so-called failing President.” Unlike many more-tacit classical artists, Levit openly makes use of his social media platform to promote awareness of government crackdowns in places like Venezuela, urging others to “Get involved. Raise your voice. Do something. Never ignore.”

Levit will be performing with the San Francisco Symphony conducted by Fabio Luisi April 27–29 in a program of Schumann and R. Strauss. He spoke with SFCV on the phone from Heidelberg, Germany, the country his parents immigrated to in 1995.

Your family moved from Russian to Germany when you were about eight years old and you were already a pianist at that point. Was furthering your musical education part of their reason for wanting to emigrate?

I was a young boy playing the piano, but a pianist? The most important reason to go to Germany and move to Europe, with my family, my sister, and my grandmother, was mainly to live here and to give my sister and me the best possible education. The main reason was the life itself, to live and to grow up, to achieve something in Europe. Part of that was the musical education, but that was not the most important reason.

The cliche of the virtuoso is that as a child you are practicing while other children are out playing. How was it for you? How intense?

I always worked intensely and I always enjoyed it. To be perfectly honest, I never gave a damn about cliches. When I wanted to work, I worked. When I didn’t want to work, I didn’t work. I had a fantastic childhood. I wouldn’t have missed anything. There are no regrets.

Can you talk a little bit about the Schumann you’re going to play here?  Was there anything in the score that interested you, or some aspect of the piece you found surprising?

I can’t really emphasize just the score. It is a phenomenally intuitive piece. It’s almost improvisational in a way. Incredibly free. Obviously, as a devoted artist I very much read the score and try to understand his score, but the music of imagination, the musical intention of a composer, of an interpreter, of the listener, is much much, much richer, much freer, much deeper than any signs on a piece of paper could ever be. So we try to understand the text, but then the imagination and what we do with this text and how we work with it—and by we, I mean both the listener and myself— goes above just the notation, and this piece in particular is  incredibly intuitive, very free, very improvisational. It’s a very humane, warm, wonderful work.

Was it Schumann’s style to notate that somehow, above and beyond the music? In other words, to write in “freely” and that kind of thing?

He does, and you can sometimes even see that he himself struggles with words and signs. So he would write, “faster,” “faster,” “faster,” “even faster,” “even faster!” He would actually write that out, and you see that he actually, probably would like you just to rip this all apart and just throw it all away and say, “What do I need this paper for, just listen to me play!” With Schumann in particular, you can see how incredibly unartistic —unmusical even ‑ it is to limit music to the signs on the paper. I think in this example you see how much bigger, wider, and deeper the imagination is than any signs.

Speaking of imagination, some of the passages in the Schumann are so fluid, listening to them I thought of a rushing river. Do you ever use imagery of nature or anything like that to help you get an overall sense of demanding passages, or what is your approach?

Well I do, but mostly, whenever I play, I think of people. Of friends, of human beings rather than nature. I very much connect music to people. But I do use nature, too. Absolutely.

You’ve called your teacher Lajos Rovatkay your “spiritual director.” Can you talk about that relationship and what the spiritual aspect of music means to you?

Well, it’s not the spiritual director. I met Lajos when I was about 16 or 17 and he introduced me to pre-Baroque, Renaissance, a cappella music, but above that, he is one of the most outstanding musicians I have ever met. One of the most educated, brilliant artists I have ever crossed paths with, so simply to interact with him, to speak to him, to become friends with him, to ask his advice, it was more about just a general education and therefore he became some kind of “spiritual director,” I would say in Latin. It’s not really spiritual, it’s just this general idea that he became some kind of light I was looking at, and he is still very much one of the most important human beings in my life, and a good friend, besides the fact that he is now 83 years old.

Can you talk about Bach and Beethoven together? What does Beethoven teach you about Bach, how does Bach inform your Beethoven? Or how does the more modern music you play inform playing Bach? Or does it?

Your job is very physically demanding. I’m thinking of the (Beethoven) Diabelli (Variations) or other longer works. How do you deal with the physical demands? Do you have a good masseuse?

I work out a lot. I have a great coach in Berlin. I have a great physiotherapist in Hannover. I take a lot of care of my physical being. I probably work out too much rather than not enough. I do take care of that a lot.

Is there anything you’d like to observe about the difference between the classical music culture in Europe versus the U.S.?

I must tell you, I always really love and enjoy being in the United States, whether for professional reasons or for private reasons. Among my closest friends are Americans. I have met such fantastic, curious, open, deep-thinking, great, great people who work in the classical music world who are in the United States. I have met people of great creativity. I have also met great people here in Europe. I don’t know. Honestly, I am a complete anti-nationalist. I don’t really care. I only care for people. Wherever I meet great people, I am just grateful that they exist, but I must tell you that I feel very close to the U.S., and no matter where I go in the U.S., I almost certainly have a great, great time. Again, no matter if it is for working reasons or private reasons.

You have played with the Dresden Philharmonie and the anti-immigrant movement in Germany has been centered in Dresden, with weekly protests right outside the opera house. Is this a frequent topic of conversation among the orchestra? Also, how do you feel about this growing anti-immigrant movement given your own family’s immigrant experience?

For this we need an extra interview. But number one, I did not have specific talks with the orchestra about this. But this topic is the most important thing to talk about with my friends. That is our 24/7 topic to think about. Not only the anti-immigrant problem in certain cities or in Germany, but the general danger of the right-wing populist movement, which is winning election after election.

It’s been a difficult year for artists, I think it’s safe to say, maybe especially in the U.S. but elsewhere too. Like most people, you have strong feelings about the political situation in the world right now and yet it takes an enormous amount of sensitivity to be an artist. Politically speaking, was there ever a point in the past year when your emotions, either despair or anger, were an obstacle or a challenge to your music? Were you overwhelmed?

You bet I did. Tell me about it. Of course I did. You bet I did! So what? The consequence was not to be less involved, but to fight with strength and to find the ability to keep going, and I did find that. I have wonderful friends, I have a wonderful family, and there are good people, so I did not, kind of, step back. But tell me about it. There were days when I thought it was impossible. [Sighs.] Totally. Just two days ago, what’s happening in Turkey, of course it does shake me up. But then there are people you see standing up and speaking out. If somebody is going to blow us up with crazy bombs, O.K., but as long as this did not happen, I can’t allow myself just to break down, so I don’t. Sometimes there are days when I think it is impossible and I’m in complete despair, but only for a couple hours, then you keep going. In the end, to communicate with people, to interact, to work with other people, this is what gives me strength and this is what gives me inspiration, and that’s what, in the balance, makes me a very fulfilled, happy human being. But once you open the newspaper, well, I won’t swear, but…”

A Wunderkind Comes of Age: Alma Deutscher Returns to Cinderella

The Other Martyr in Town: Philharmonia Baroque Orchestra’s Theodora

Getting in the Habit: Michelle Bradley Sings Dialogues of the Carmelites