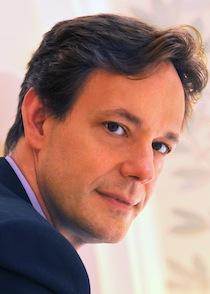 As one of the world’s most produced living opera composers, San Francisco’s Jake Heggie (Dead Man Walking, Three Decembers, Moby-Dick) always has multiple irons in the fire. Reached in New York City, where he was in the midst of playing piano for the debut CD of Bay Area soprano Talise Trevigne (one of the stars of Moby-Dick), Heggie paused just long enough to reflect on the San Francisco Performances Feb. 4 premiere of Camille Claudel: Into the Fire. Then, after one more day of recording, he headed to Texas to help announce the 2015 Dallas world premiere of Great Scott (profiled here), his second major operatic collaboration with playwright/librettist Terrence McNally.

Camille Claudel: Into the Fire, a 35-minute song cycle with lyrics by Gene Scheer, was commissioned to celebrate the 30th anniversary of the Bay Area’s Alexander String Quartet. The Herbst Theatre premiere, which will also include Heggie himself as the pianist and mezzo-soprano Joyce DiDonato, focuses on the tragic demise of the genius sculptor and lover of Rodin. Claudel’s career ended when she was confined to a mental hospital for the last three decades years of her life. Her involuntary incarceration, which many considered unnecessary, almost doomed her to obscurity.

What attracted you to the story, Jake? Is the piece based on the movie [Camille Claudel] about her life?

I am consistently drawn to stories about transformative quests for identity, whether that’s through our own internal struggles, the eyes of another, or struggles that are put upon us by society and convention. I didn’t know anything about Camille Claudel when I saw the movie during its 1989 opening run, but what struck me was that it was a story of a woman struggling to be known on her own, and on her own terms, for the genius that she was given. This was at a time when women were not taken seriously in the role of artist. Only in connection with a man could a woman become known; that’s why 19th-century French [woman] novelist George Sand had to have a male nom de plume.

Camille was a genius, and knew she was. She was a hard worker, and feisty and passionate. Rodin fell for her, and she probably fell for him for a few reasons. She inspired Rodin’s work, and he inspired hers. But as her work grew, so did her paranoia. There really isn’t a happy ending for Camille, except that she is [posthumously] getting her due as a great artist.

The movie really moved me. It touched on elements of feminism, on the art world, on judgments of the public versus the internal life of the artist. It also touched on mental illness, which is something that is very close to me because my father was bipolar and committed suicide when I was 10.

In the end, Camille [Claudel] does triumph, because her sculptures love and dance and sing.

I knew it was something that I wanted to do, through either song or an opera at some time. I thought it had real potential for a stage work centering on Rodin’s overpowering personality and artistic genius, and then [on] Camille, this strong, independent, and yet intensely vulnerable woman wanting to be recognized and identified on her own for what she had to give.

A couple of years ago, I really did think of doing it as an opera when Ruth [Felt, president of San Francisco Performances] called me about doing something for the Alexander String Quartet’s 30th anniversary, and said we could bring in a singer. I immediately knew whom I wanted to write for and what the piece would be about.

Is your composing related to your dad’s suicide?

I began composing when I was 11, right after my dad died. I was always interested in storytelling. I keep a list of stories, personalities, and subjects I think would be fascinating to pursue at some point, and the movie has always stuck in my head as one I wanted to follow through on. I’d still like to see it as a fully staged opera at some point. I’ve learned a lot about how I would do that, from writing this set of songs.

What part of Claudel’s life does your piece focus on?

Gene [Scheer] and I have chosen one of the most dramatic days of her life, when her family had her committed to the asylum and never went to see her.

A composer writes basically a road map of something they hear inside and feel inside.

She had no way to get herself released?

No. By law, the family had committed her, and only they could release her. There was some loophole that allowed the family to claim that she posed a threat to herself and to those around her. The people at the hospital insisted that she was well enough to leave. What she needed was society with people, not isolation.

Her brother, Paul Claudel, a world-famous poet and playwright who was also a diplomatic ambassador from France to several countries, was worried about the controversy she might cause. Because she had become a paranoid schizophrenic, he was very keen on having her locked up.

Yet, after she died, he arranged an exhibition of her work.

He did. But Rodin had always championed her work, because he recognized her genius. Before he died, he insisted that one room of the Rodin Museum, in the house where he worked and died, be dedicated to her work. He always tried to support her work, even though Camille, who was paranoid, thought it was just the opposite; she thought he was trying to destroy her work!

Before Camille was taken away, she actually destroyed a lot of her work. She was afraid it would be copied, stolen — out of her control. We have about 90 pieces left, between sculpture, painting, drawings, and plasters.

In our piece, she has conversations with five different sculptures of hers that remained behind. Gene managed to find the actual stories about when those sculptures happened in her life, and tied them into a poetic thread of songs about love, loss, dance, and death. They provide a window into her sense of loss. We also learn what inspired the sculptures, and where they “took” her. We try to make it an active memory of discussion, essentially with herself but also with the sculptures.

There’s one sculpture, La petite Chatelaine, that she made right after she aborted Rodin’s baby, probably at his behest. That ended their relationship, and her work changed, too. But Gene’s found a way to tie in the sculpture with that event, with Camille asking the bust of the child, “Do you know who I am?”

In the end, Camille does triumph, because her sculptures love and dance and sing. They’ll live longer than we’ll be around, and her genius is recognized more and more as the years go by.

How is this piece for Joyce [DiDonato]?

I just played it through for her two days ago. She loves the songs — loves them! Actually, because I was writing for her, and I’ve written for her quite a lot now, I’ve really gotten to enjoy exploring melismas and coloratura. I never was a fan of the bel canto period, but suddenly I’ve become a huge fan, because I realized that melismas and coloratura are meditations on a particular word or mood and what it means dramatically. They’re dazzling because they mean something. I really enjoy exploring them, and it’s finding its way into my music more and more. And Joyce is their perfect champion.

How lucky are we to have Joyce fly back for a new piece that has just one concert! And the gift of being able to write for the Alexanders on their anniversary is very special. They’ve not only provided great music-making for so many people, but also done such a service by going to schools, working with children, and illustrating different things. I have great admiration for them.

I’m really attracted to singers who throw the metronome out the window. Do you want singers to do that?

Absolutely. But that’s what you hope for.

A composer writes basically a road map of something they hear inside and feel inside. In the hands of a great artist, they navigate that map and, all of a sudden, the music flies off the page. That’s what you always hope for. If that means they take time here, or push here, or pull there, if it’s coming from an authentic place in the artist and they’ve hooked into the zone that you worked in when you wrote it, that’s what great artistry in music-making is all about.

If a piece is really good, there are many sides to a tempo that can be explored. It can stand it. But [interpretation] has to come from an authentic place in the artist themself. That’s what great artists can do.

Great artists I work with who sing a piece of mine are always deeply inquisitive about what inspired it, where it came from, why this note value, why that. After we talk about it, and they tell me if they’re feeling it differently, I may say, “Let’s go with that,” or I may say, “I respect that you want to do it that way, but let me explain why, in the context of the overall piece, this is what I had in mind.”

That we can have an active discussion is very gratifying. I would rather have an artist with ideas who has an authentic impetus to move something or pull it back, than someone who [sings] extremely by the metronome. To me, metronomic singing is dull, dull, and dull. Great artists really inhabit the music. Then they stop thinking about it and just let it happen.