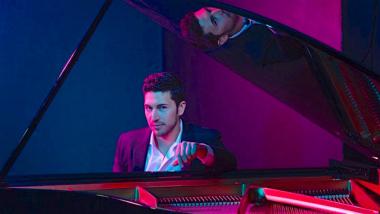 Age is just a number to pianist Emmet Cohen. Young or old, if you’re a commanding jazz improviser he’s eager to collaborate. Only 29 himself, he’s earned renown as one of the hardest swinging pianists on the New York scene. His ever-expanding engagement with artists on either side of the chronological continuum is on full display as he plays a series of high-profile gigs around the region in the coming days.

Cohen arrives in the Bay Area fresh off of winning the Cole Porter Fellowship, jazz’s most prestigious and lucrative piano prize. The final round of the 14-month competition took place in April in Indianapolis, and the award includes a contract with Mack Avenue Records. He joins an illustrious roster of past winners that includes Sullivan Fortner, Aaron Diehl, and Aaron Parks.

“It’s a long, very involved process and it teaches you to relax and be yourself since there’s nothing else you can do but be the best you,” said Cohen, who kicks a long string of Bay Area dates on Friday, July 26 with a solo recital at Walnut Creek’s Congregation B’nai Shalom.

“The best part is getting to hear all the other pianists, how they talk and run a trio, what they’re thinking about, reading and practicing. It harkens back to the old cutting contests, when stride pianists would face off at Minton’s,” the Harlem nightclub that served as the cradle of bebop in the early 1940s.

Cohen steps into the sideman role with the sensational 25-year-old singer Veronica Swift, who kicks off the impressively curated Jazz at Lesher series with two shows at Walnut Creek’s Lesher Center for the Arts on Saturday, July 27. Cohen’s trio also backs Swift on Sunday, Aug. 11 at the Hammer Theatre as part of San Jose Jazz’s 30th Annual Summer Fest.

The daughter of two jazz luminaries — the late pianist Hod O’Brien and vocalist Stephanie Nakasian — Swift has gained attention around Northern California in recent months performing with piano great Benny Green. He featured her on his 2018 album Then and Now (Sunnyside Records) and described her in an email to me as “the greatest straight-ahead jazz talent I’ve seen emerge this century. She is without doubt a pioneer for this and the generations to follow, speaking the language of bebop with a fire and authenticity.”

Both Green and Cohen’s trios back Swift on her upcoming album Confessions, a blazing session for Mack Avenue that’s out on Aug. 30. Swift was still a teenager when she and Cohen first connected, essentially meeting each other while recording the title track to her 2015 album Lonely Woman. “Everyone in the room, particularly Hod and Stephanie, looked at each other like, that’s a good match,” Cohen said, speaking by phone from Costa Rica, where he was performing at Emilio’s Café near the national park Manuel Antonio.

“We understand each other musically. We have a deep and really powerful friendship, that special relationship between a pianist and singer. It’s been awesome to see her ascent in New York.”

An irrepressibly swinging player with a light but forceful touch, bountiful wit, and striking fluency in nearly a century of jazz piano idioms, Cohen isn’t just hanging around with the bright young stars. He’s made it his mission to perform with and document the music’s foundational figures via his ongoing Masters Legacy Series. The kicked off with 2017’s Volume 1, an album featuring then-87 drum legend Jimmy Cobb. The following year he released Volume 2, shining a spotlight on bass maestro Ron Carter, then 80.

He’s recorded unreleased sessions with tenor-sax greats George Coleman and Benny Golson. In April, Stanford Live presented him with 90-year-old vocalist and NEA Jazz Master Sheila Jordan and 83-year-old drum great Tootie Heath, with whom he performs in a trio at the Hammer Theatre on Aug. 11.

“All the masters have a different lesson to offer,” he says. “They provide a connection to a bygone era. Ron Carter’s message is seriousness and focus. Jimmy Cobb’s is consistency and strength and groove, straight ahead, right down the middle. He’s still going strong.”

It was Tootie’s older brother, saxophonist/composer Jimmy Heath, who inspired Cohen to starts the series. Not long after moving to New York, he landed a plum gig in the Dizzy Gillespie Alumni All-Star Band. On a bus ride down to perform at the Kennedy Center in Washington, D.C., he ended up sitting next to the octogenarian saxophonist and NEA jazz master, who regaled him with stories about “Charlie Parker coming over to his house for dinner, and about John Coltrane playing in his band,” Cohen recalled. “Ever since then I’ve tried to be around as many jazz masters as possible.”

“Jimmy Heath is harmony, the gift he got passed down from Dizzy Gillespie,” Cohen continued. “He’s written so many great tunes and continues to write new charts at 92. Tootie, he’s a comedian. He’s done it all, played on John Coltrane’s and Nina Simone’s first records, with all the greats. It’s incredible to be around someone like this, who’s so deep and done as much as he has, from one of the great jazz families ever.”

Cohen performs with his own trio at Santa Cruz’s Kuumbwa Jazz Center on Aug. 12 and at Yoshi’s on Aug. 13. But in some ways his most personal concert is Friday’s recital at Congregation B'nai Shalom. Part performance and part lecture, the presentation highlights the intersection of Jews and jazz, which is largely the story of Jews and African Americans navigating the treacherous first half of the 20th century, sharing stages, tunes, and studios.

He also reveals some largely hidden history, like the Jewish faith of storied stride pianist Willie “The Lion” Smith, “who spoke Yiddish and had a bar mitzvah,” Cohen says. “It’s a cool little show I’ve been offering at various synagogues and JCCs.”