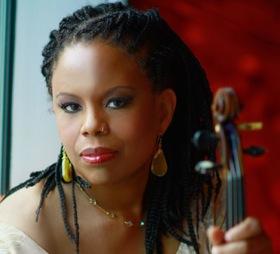 Orchestras and classical chamber ensembles have never felt quite right to 44-year-old Regina Carter, who achieved notoriety, and a MacArthur Foundation Fellowship, as a jazz violin soloist. She was also the first from that genre to be invited by the city of Genoa, Italy, to perform on Paganini’s “Cannon” (the larger, louder violin created by Guarneri in 1743). Carter has broadened her repertoire to include African regional music, which she showcased on her delightful latest recording, Reverse Thread (Times Square Records). And she’s pleased to be presenting the West Coast premiere later this month of Billy Childs’ Concerto for Violin and Orchestra, in concert with Michael Morgan and the Oakland East Bay Symphony (OEBS), in association with San Francisco Performances. Carter spoke with SFCV from her home in Maywood, N.J., about the Childs piece and how she and her instrument found their comfort zone.

This isn’t your first Bay Area visit. I witnessed your appearance 14 years ago with Wynton Marsalis at the Masonic Auditorium, in his Blood in the Fields, which had just won the Pulitzer Prize.

Yes, and I was artist in residence for San Francisco Performances for a while. I didn’t actually live there, but I would come out twice a year, for a week at a time. San Fran was my second home. I love San Francisco, and I love Oakland.

What did the artist in residence do?

The beautiful thing about the program was, they pretty much left it up to me. I went to several public schools in Oakland and San Francisco, and universities. I performed at Delancey Street twice; the audience had such great energy, it was just a high for us. And I worked with Allen Temple Baptist Church in Oakland, working with the choir and playing at services, and doing family concerts. ... I was constantly in the community, though I did play concerts. As far as an artist in residence program, that’s one to model.

You’re back here to appear with an orchestra, but we’ve seen you principally in jazz contexts. How do the jazz and classical units hook up?

The majority of nonjazz gigs I’ve done have been orchestrations of tunes we’ve recorded as a quartet. There were John Clayton arrangements, and I did a piece by David Schiff about seven years ago, with the Detroit Symphony. With the OEBS, I’m doing a piece that Billy Childs wrote. Even though there’s some improvisation, the bulk of it is more in the European classical vein. And it’s a very different head space for me. It’s good for me, but it’s uncomfortable [laughs]. Sometimes we need to be uncomfortable. I don’t wanna have a lot of that in my life, but every once in a while it’s good, and I realize that it helps my playing, gives me a little more confidence.

Billy was commissioned by the Kronos Quartet last year, and performed the piece with them at the Monterey Jazz Festival. This new piece is a commission from you.

When you ask someone to write a piece for you, I always say it’s like a drawing. Sometimes people will draw a portrait of you and you look at it and say, “That doesn’t look like me!” But it’s their interpretation, that’s how they see you. When I looked at it, I said, “This is for a classical player.” But this is obviously what Billy heard when he listened to my records, so this is his interpretation of me.

You did absorb some classical repertoire as a kid, though, studying the Suzuki Method back in Detroit.

Back then, they concentrated on classical music. There are certain pieces that are in the Suzuki book which everyone plays. But my teacher, Jean Rupert, didn’t follow the Method to a T. Sometimes she would line us up and she would start to play a bit of a melody, just a couple of measures, and then when she tapped you on the shoulder, you had to pick up where she left off, and the next person would have to come in after you. So it was improvisation, in a European classical sense, but it also gave us freedom. Sometimes she’d bring in some Baroque music, and have us try improvising in that style. So I felt like she really gave me a great foundation for improvisation, and really helped develop my ear.

How soon did you know you weren’t headed for a classical career?

I pretty much knew in ninth grade. One of my closest friends, who’s a phenomenal jazz vocalist, Carla Cook, she was in orchestra with me, and she would always talk about [singers] Etta Jones and Sarah Vaughan. I found recordings by Stéphane Grappelli and Noel Pointer, and that was my introduction to jazz, by way of violin players. And then of course I found [jazz violinists] Jean-Luc Ponty, Michael White, Michal Urbaniak, and the list went on. Then I stumbled on a record by an Indian violinist, L. Subramaniam. The freedom of the music was very new to me.

All through college I did, at the New England Conservatory. I felt, at the time, that it was very uncomfortable. The music was interesting, but I wanted to have my own voice and interpret the piece the way I wanted to. And whether you’re playing chamber classical or chamber jazz, it’s not just about you anymore, it’s about the sound of the group.

You’ve also said that you found a difference between counting the beat, in jazz, and working with a conductor.

Playing in the orchestra, I realized I couldn’t understand the timing. When the conductor gave the downbeat, I figured, here’s “one,” but the orchestra might come in two seconds later. And they all would come in together. And I thought, How do they all know to come in then? I remember speaking to the conductor at one point, telling him it was so uncomfortable, it was a tense situation for me, and he told me the orchestra has its own timing.

So you left New England.

I knew I totally wanted to concentrate on jazz, so I transferred back to Oakland University in Rochester, Michigan. I still took my European classical lessons, but I totally immersed myself in jazz.

Since you're now occasionally guesting with orchestras, have you run into that jazz-versus-classical timing issue again?

One gig I had, it was doing the music of Duke Ellington, and Sir Simon Rattle was conducting, in England. There was a part where the percussion player had to play on "two" and "four," with my rhythm section, and he was coming in behind. Lewis Nash was on [jazz] drums, and they moved him next to Lewis. And he was still coming in late! And we realized, he was following the conductor, instead of just listening. Some orchestras have a better sense of timing than others, but some don't listen, they just depend on that baton. For me and a lot of other jazz artists, it's difficult to watch the baton, because we feel, here's the downbeat, and that's where we should be. To come in after that is very uncomfortable.

There are two movements. The first is an elegy, and it’s a very sad and moving movement: mothers mourning over their children and spouses, lost in the Iraq War.

How does one know that that’s what it’s about?

Billy told me. ’Cause I have to know what a piece is about. No one can write a piece and have it just be notes on a page. They have to come from somewhere, the person writing it has to have had some kind of inspiration, and I need to know what that inspiration is. Otherwise it’s just dots on a piece of paper. I wanted to get as close as I could to what he was feeling when he wrote it, and try to put myself into those shoes. Of course, we were both trying to put ourselves into the shoes of those mothers. The second movement is “Dies Irae,” Day of Wrath, which is very angry. It’s the stages of mourning: First you’re sad, and then you get angry, and it’s pretty aggressive. From the time I come in, there’s no letting up until we’re finished. For me, it takes a lot of emotional and physical energy, it’s very draining. The first [movement] is very vocal; I think of myself as the vocalist. ... I’m the collective mothers’ voice. And in the second movement, it’s their anger.

Are you a mom?

No. No time. My husband [jazz drummer Alvester Garnett] and I laugh: If we had babies, they’d be raising themselves.