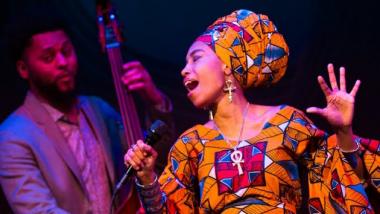 Jazzmeia Horn is Making Her Mark on Vocal Jazz

It’s not easy to get noticed in today’s seemingly limitless sea of singers. Talent, of course, is essential, but originality, personality, and style matter tremendously. With her colorful, African-inspired headscarves and attire, graceful beauty, and prodigious vocal agility, jazz vocalist Jazzmeia Horn immediately grabs your attention. At only 28, her career has been on a brisk upward rise. In 2017, her debut recording, A Social Call, was nominated for a Grammy in the Best Jazz Vocal Album category, and her highly anticipated second album is due out in August. You can catch her on Wednesday, June 12, in the Miner Auditorium at SFJAZZ, one of the many talented artists featured in the 37th Annual San Francisco Jazz Festival, which runs from June 11 through June 23. 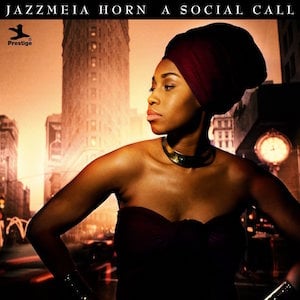 Blessed with a wide vocal range, a lovely, lilting timbre, an ability to scat like she was born doing it, and a strong commitment to her African roots as well as social and political issues, Horn’s personal brand of charisma is refreshing and unique. Born in Dallas, Texas, she was surrounded by a family of singers, and at just age 3, she joined the choir in her grandfather’s church. And though she didn’t plan on a professional singing career, it turned out to be her destiny.

After attending the Booker T. Washington High School for the Performing and Visual Arts, Horn moved to New York and earned a degree at The New School for Jazz and Contemporary Music. She began playing clubs around town, and eventually started appearing at major jazz festivals. In 2012, she won the Rising Star Award at the Sarah Vaughan International Vocal Jazz Competition, and followed it up as the winner of the 2015 Thelonious Monk International Jazz Vocals competition, and since that time she has been capturing a lot of attention and wowing the jazz world.

Horn draws her influences from a rich mix of jazz vocal virtuosos like Betty Carter, Nancy Wilson, Nina Simone, Rachel Farrell, and Carmen McRae, and performs classics with her own original interpretations and arrangements.

I got to ask her a few questions about her whirlwind life recently via email, while she was away on tour in China.

In addition to being a singer, you seem to be quite interested in current social and political issues. What do you hope to accomplish by mixing that in with your music?

While I am not a politician, unfortunately a part of my reality as a black woman on this planet is that I am very much affected by a lot of social and political issues worldwide. Since music is a part of my daily religion as an artist, I use it for healing through passionate expression on my stage to get through those social and political issues. That’s what people hear and feel when they come to my shows. I do this in hopes of a change in frequency.

Which singers have you been influenced by the most and why?

I have been influenced by so many singers — too many to name. Today I especially appreciate Stevie Wonder for his songwriting skills, Jon Hendricks for his lyric-writing skills, Betty Carter for her fearless and daring attitude towards music and society, and Rachelle Farrell for her expression of freedom.

What inspires the beautiful headwraps and outfits you wear to perform?

I am always inspired by the anthropology of the African Diaspora. Culture makes me a proud human, and I have learned to appreciate and own all of the many cultures within my DNA.

You recently became a mother. How do you balance your busy work schedule with raising a small child?

When I became a mother, I was already prepared for parenting as much as I needed to be. Mostly everything is felt. There is no handbook on being a parent. Community is important and I have had a strong community! Managing my life became even simpler once the child came. Because I had experience taking care of my business and my musicians operating especially in New York City, my organizational skills and discipline as a parent were natural.

Being a professional musician is not easy. What drives you to record and perform?

It is my passion. I really couldn’t see myself not being a professional musician. I am driven by life’s experiences. I’ve always known that this is exactly what I am supposed to be doing.

Why do you think music is so important to the human race?

Music is vibration sound waves. Those can change everything! Humans could use a bit of change in that way.

You are quite accomplished at such a young age. Do you have a vision of where you want to go with your career? Might it involve other things besides singing?

I hope to teach later on in life when I feel like leaving the stage for good (which will be no time soon), but when that time comes I want to share everything I’ve learned with the youth. Right now, I just want to compose and play my own music and enjoy my musical journey.

What are the challenges of working and touring with a mostly male band?

Honestly, It’s been a privilege. These men are my brothers. Traveling with them makes me feel safe. We encourage each other to play better and get stronger. We eat most of our meals together. We sightsee various countries together. Walking through life together in this way helps us develop a spiritual bond. That’s why the music is so great and has an even deeper desire to be better.

We respect one another. Even though I am the only female, I lead the pack as the boss, and because I respect them as the kings that they are, we don’t have problems. These men grew up with their mothers, sisters, aunts, and cousins who look very similar to me and they treat me as so. I grew up as the oldest child with two younger brothers, and I was always playing football outside with them. Now I am the bossy little sister with several older brothers that I play music with. Please don’t wake me up! It doesn’t get much sweeter than this.

What can we expect from your next recording? Will there be more of your writing on it? When will it be out?

Love & Liberation on Concord Records will be out on August 23rd of this year. I am very excited — eight out of 12 tunes are my original poems and compositions — I finally get to share my music with the planet.

The inventive duo joins forces with percussionist Tupac Mantilla in a set of John Zorn pieces.

Lila Downs Is All Showbiz at SFJAZZ

The singer deployed her vocal gifts in a set drawn from her latest album.