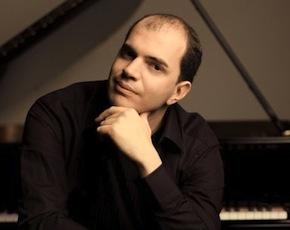 Kirill Gerstein is one those artists who actually benefited from the rise and the fall of the Soviet Union. Born in 1979, Gerstein profited from the Communist superpower’s cultural education system, which transformed him into a superb concert pianist. At the age of 11 he won the International Bach Competition in Gorzów, Poland. At the same time, thanks to a stash of records accumulated by his father, the young musician fell under the spell of American music and the art of improvisation. Ultimately, it was jazz, not classical music, that provided him and his family a ticket to America. Gerstein was 14 when he was invited by vibraphone virtuoso Gary Burton (whom he’d met during one of Burton’s tours) to attend the Berklee School of Music in Boston, where Burton was on the faculty.

In 2001 he took first place at the Arthur Rubinstein Piano Competition in Tel Aviv. He was chosen to receive a 2002 Gilmore Young Artist Award, and was selected as Carnegie Hall’s “Rising Star” for the 2005–2006 season. He became an American citizen in 2003 and is currently a professor of piano at the Musikhochschule in Stuttgart. In 2010 he was awarded the $300,000 Gilmore Artist Award.

His masterful technique and probing interpretations have led to explorations of classical music and jazz, advanced degrees by the age of 20, a professorship in piano by the age of 27, and a full performance schedule at the world’s major music centers and festivals.

On Feb. 12 at 3 p.m., Gerstein will be presented in recital by Cal Performances in Berkeley, performing a program that might be called “Invitation to the Dance,” featuring, as it does, dance-inspired works by Bach, Schumann, Mozart, Weber, and Oliver Knussen. SFCV spoke with Gerstein from his home in Stuttgart.

Tell me about Voronezh where you grew up. Is it a town, a village, a city?

Voronezh is a city, all right; there are more than a million people. It’s in Russia about 300 miles south of Moscow. It was a city where a lot of defense industry and military aircraft were based. So it was a city that was not 100 percent advertised. It was also an education center with more than 30 colleges. The lucky thing for me was that when I was entering the first grade, that was the year they opened one of the special music schools, the kind that were in Moscow and St. Petersburg. It was a school that specialized in professional musical training.

The Soviet Union was still very much in place at that point. Give me your perspective on how things changed and how it affected your family.

Things took a long time to shift, so I still remember plenty of remnants of the Soviet system, lots of negative ones, but also positive ones like the incredible education system. I remember water often not running on the fifth floor of our apartment building. I remember telephones being bugged. I remember listening to Voice of America and the BBC on shortwave radio. But when something really important happened, all you would hear was the sound of the jamming. I remember the children’s magazines that always had the portrait of the general secretary of the Politburo on the cover.

You also had the identity of growing up as a Soviet Jew. What was that like?

The experience of growing up as a Soviet Jew was a peculiar one. People ask me, “Did you go to synagogue?” Well, you couldn’t, because religion, even the Russian Orthodox Church, was not encouraged. Yet we grew up with this feeling that we were a separate ethnic group. We were Jewish, not so much based on the religion, but on our cultural identity. It was also very easy to be reminded that you were Jewish because the third line of the Soviet passport said “Nationality.” So you were either written in as Russian or Ukrainian or a Jew. As children we were very aware of. We weren’t Russians. We were Jews.

Did you have friends who made the decision to immigrate to Israel?

Yes. We had plenty of friends that went to Israel. But you have to remember Jews had begun to immigrate, though with great difficulty, in the 1970s. Later there were waves when people managed to leave, and we knew the whole path. In my family’s case, we were able to come to America, though it was difficult for my parents, because of my invitation to study at the Berklee School of Music.

In 2001 you went to Tel Aviv for the Arthur Rubinstein Piano Competition, and you won. What was it like being in Israel for the first time?

It was wonderful, especially because it turned out so well for me. I was 20 and prepared to be skeptical and not to give in to the whole “homelandmania.” But I discovered there is something very special about Israel. There is something in those rocks that have made people fight and clamor over them for thousands of years. And the sunset over the beach in Tel Aviv is an incredibly beautiful thing.

I taught myself jazz by listening to recordings.

Although you were becoming a serious classical musician in school, you were also developing this real taste for jazz. Talk about that.

In Voronezh there was no live jazz scene. So I taught myself by listening to recordings. Then, when I went to my first piano competition in Poland, one of the organizers told me about a jazz club where they offered summer workshops taught by musicians from the Berklee School of Music. I got a scholarship to attend. That was my first real encounter with live jazz, and it was like an explosion of music and ideas. The progressive thinkers appreciated jazz for its sound but also for what it represented as a form of freethinking and unscriptedness, which was so different from what Soviet life was about.

When I was 12 I got to go to an international jazz festival in St. Petersburg (then Leningrad). By then I spoke pretty good English. That’s when I met Gary Burton, and I ended up acting as a translator for him. After that, he asked me to send him a recording. And that led to me being invited to come for a five-week summer program in Boston.

You’re so passionate about jazz, yet you are performing almost exclusively as a classical pianist. Why is that?

What really interests me right now is trying to bring classical music and jazz together.

When I went to study at Berklee, classical music took a back seat. That was a fork in the road for me: I could have gone one way or the other. I felt torn between classical music and jazz. I had a sort of childish hope that I could do both. But to do both on the same level of skill and truthfulness is perhaps impossible. I had to decide whether I wanted to play jazz, or music by the great classical composers. I decided to play classical music. And that’s what I have been doing, though I am starting to think about what I can do with jazz. What really interests me right now is trying to bring classical music and jazz together. So I’m doing a program of classical-music-looks-at-jazz at the end of March at Berklee.

You know, I received a good deal of money when I won the Gilmore Award. I decided to use a large percentage of it for commissions. I commissioned Oliver Knussen to write a piece for me that I’ll be playing as part of my recital. I also commissioned Brad Mehldau, who wrote a set of variations for me. Chick Corea is writing a piece for Gary Burton and me that I am really excited about. And a young American composer, Timothy Andres, is also writing a piece for me. So that’s where the Gilmore money’s been going.

You’ve spent a great deal of time performing the music of Rachmaninov. You were featured at the recent “Rach-Fest” in Houston, which included a performance of the “dreaded Rach 3!” [Concerto No. 3] Have you ever had a nervous breakdown?

Absolutely not! [Laughs] And I think it would do a great deal of good if piano teachers would not talk about the Brahms Second and the Rachmaninov Third as though they were monsters. They’re daunting, but they’re not like the movie. They won’t put you in the hospital.