Lea DeLaria Gives It All

If anyone knew she would become a beloved and outspoken actress, comedian, and gay icon, it was Lea DeLaria. Seemingly bolting to overnight stardom with her three-time Screen Actors Guild Award-winning role as Carrie “Big Boo” Black in the Netflix hit series Orange Is the New Black, DeLaria is an artistic force of nature — and one who can also sing. Not for nothing did The New York Times’ Stephen Holden write that DeLaria “swings hard, and scats and bends notes in a style that suggests a no-frills Betty Carter on steroids.”

Born in Belleville, Illinois, in 1958, DeLaria is credited with being the first openly gay comic to appear on a late-night talk show, with her 1993 appearance on The Arsenio Hall Show. It was there that she zinged the audience by declaring her sexual orientation, parlaying that gig into playing the role of Hildy Esterhazy, the bossy but affable cab driver, in the 1994 Public Theater revival of On the Town, for which DeLaria won an Obie.

Since that time, the feisty performer has appeared on stages around the world, including at Lincoln Center, the Sydney Opera House, and at the Royal Albert Hall, while her vocal stylings were also heard at the 50th anniversary of the Newport Jazz Festival, in 2004. Currently co-starring as Queenie in Hulu’s new streaming series Reprisal, the revenge thriller that dropped in December, DeLaria will be bringing her brassy blend of comedy and jazz to The Theatre at Ace Hotel on Jan. 18 under the auspices of CAP UCLA.

I caught up with the Theater World Award-winner and Drama Desk nominee by phone from her home in Brooklyn. Her rapier wit on display, DeLaria opined on a number of topics, including her upcoming Los Angeles croonfest and what it’s like being a lesbian role model in Hollywood.

Growing up, did you always want to be a singer, an actor, and/or a comic, and why?

I always wanted to entertain and I’m lucky enough to have supportive parents who encouraged me to do all the things that I can do — so I do them. They saw my success, what I call ‘my long climb to the middle,’ and they came to see me. They were in the front row at the openings of my Broadway shows, my concert in Carnegie Hall, so yes, they were very supportive.

Is it true that your mother wanted you to write a letter to Ethel Merman with a tape of your voice — and did you?

Assuming we leave La Merman out of the equation, who have some of your influences been?

I’m very old-school show business in that I follow and love the people that can do it all — from Judy Garland and Sammy Davis Jr. to Carol Burnett — and I could go on and on. When I do a live show, I put everything I can do into that show. You’ll see me do stand-up, and you’ll see me be very serious when I do a ballad. When I’m on Broadway it’s like my office is calling me.

Can you talk about your upcoming cabaret act at the Ace Hotel? What will audiences hear, who are your accompanists, and how much material will be from your latest album, House of David: delaria + bowie = jazz, which features tunes including “Fame,” “Space Oddity,” and “Let’s Dance.”

There will be some Bowie, but it’s a combination of stuff off of all of my six albums. The band is phenomenal. There’s standup bass player Endea Owens [a 2019 Lincoln Center Emerging Artist], and Sheryl Bailey is on guitar. She’s the head of the guitar department at Berklee College of Music in Boston, the number one school for jazz. She’s my musical director. Sylvia Cuenca is on drums, and then Miki Hayama is on piano and keyboards. We also bring a Fender Rhodes out. 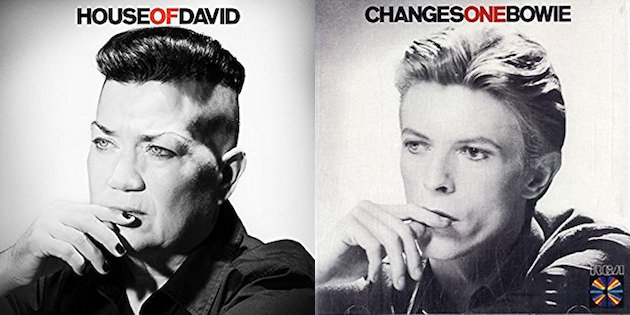 There’s also a shit ton of stand-up. Given the state of the current administration, I got a lot to talk about. But the reason I picked Bowie is because he’s a goddamn genius. I do unusual jazz, I don’t do the American Songbook. I do music you don’t expect to be swung, but I swing it. Bowie wrote about the album on his website. He told everybody to get my album funded, and it was very cool that he was supportive. It’s definitely the best thing I’ve ever done.

So, you met Bowie at some point?

No. He had seen me in concert but I have no clue where. He tweeted out to go support me — to give me money to get this record made. And then he died six months after I released the album.

You’ve played Hildy Esterhazy in Bernstein’s On the Town and Winnie in Samuel Beckett’s Happy Days. What do those roles have in common?

Do you dance, as well, making you a multi-hyphenate performer?

There are millions of us on Broadway — okay, maybe not millions — but many, many, many of us on Broadway who sing, dance, and act, and I dance well enough to be a principal. Yeah, I’ve danced and sung and acted in every piece I’ve ever been in. My mother was a dancer, which is why I move pretty well, and my father was a jazz pianist. I was singing with my pop in the clubs when I was a kid. They actually met in the USO when my father was in the Army Air Corps and my mother was a dancer, so I was raised by talented people.

What venues would you still like to play that you haven’t yet?

I’ve performed basically at every major concert venue in the world. It’s kind of crazy. I just did a thing in Vienna. You name the concert hall and I’ve played it. The Acropolis is the only thing I haven’t done, but all of those places that you named — the Royal Albert Hall, the Palace in London. I played the Bowl at least five times, and part of the fun when you perform is being able to do these huge things in these huge venues. My last Bowl experience was hearing 25,000 people laugh at the same time — that’s very humbling.

Was it hard to say goodbye to Big Boo on OITNB?

Of course, I miss the show, but it happens. That’s the life of an actor. You finish a show and it’s on to the next, which is Reprisal. That’s the kind of the business I’m in.

With Reprisal and the role of Queenie, where you play a kind of vicious den mother and coordinator for a nightly burlesque review, you’ve been a champion for the LGBTQ community, especially lesbians. What’s the status of lesbians in Hollywood these days?

I think we have to be careful and cautious and again, I have to speak out to my own community — why don’t you have lesbians’ backs? If a nongay man plays gay they go apeshit, but all the lesbian images out there now are being written and directed by men. We’ve been totally eradicated from our own narrative. I’m grateful I got to do Big Boo. It wasn’t written by lesbians but at least I was playing the role. It gives it authenticity.

With Reprisal, which is first and foremost a revenge tale, it’s very noir, very women-oriented, and very surreptitiously feminist. It exists in a masculine world, [and] you discover as you watch it that the women are the toughest people in this world, the smartest. If Quentin Tarantino and David Lynch had a baby, it would be this show.

So that’s two really great butch characters that I have been able to put forward. There are more bitches on a couple of other shows, but every time we take a couple steps forward, then we go backward. There were so many lesbian movies that came out last year but not a one portrayed by a lesbian. That I find frustrating and I blame us.

For some reason our community doesn’t want to stand up for this issue. That lesbian chic thing that certain shows glorify is directed toward straight men. It has nothing to do with us and our story. It’s fucked up. We’re making some progress, but we still have a long way to go.

And about your “long climb to the middle.” Do you still feel that way?

No, I don’t at all. I’m [like] a fucking Jonas Brother, and teenage girls scream wherever I go. 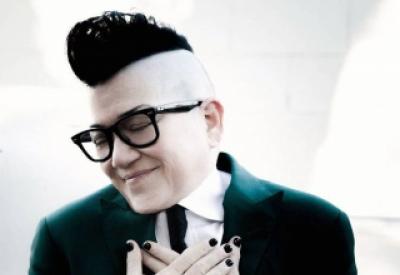 Orange is the New Black's Lea DeLaria In Concert

The Culture Clash cofounder talks about the premiere of King Arthur with Long Beach Opera.

The singer-songwriter brings the music of her latest album to Berkeley’s Freight and Salvage.