Praised by The New York Times’ Vivien Schweitzer for her “thoughtful musicality” and “fleet-fingered panache,” pianist Liza Stepanova was born in Belarus and lived in Germany for a decade. Earning degrees from the Hanns Eisler Academy in Berlin and the Juilliard School, the musician is currently an associate professor of piano at the University of Georgia. In her late 30s, Stepanova has performed at venues including the Berlin Philharmonie, the Weill and Zankel recital halls at Carnegie Hall, and at the Kennedy Center.

Following her well-received debut solo album, Tones & Colors: Music and Visual Art, a collection showcasing the cross-pollination between visual and aural media recorded with Grammy-winning producer Adam Abeshouse, Stepanova recently released her second album, E Pluribus Unum. A response to the political climate of 2017, the disc, which showcases nine renowned American composers with immigrant backgrounds, is an artistic response to the immigration policies implemented by the Trump administration at that time.

Indeed, the album, which also seems to have captured the zeitgeist of today, addresses the urgency of historical, cultural, and political calls for justice. I caught up with Stepanova by phone from her home in Athens, Georgia, where she lives with her husband, violinist Itamar Zorman, and their toddler daughter.

You began E Pluribus Unum some three years ago, not knowing what the year 2020 would bring. How are you doing during the COVID-19 crisis and how has this project been for you personally?

I’m so far, so good and [since] I have a full-time teaching job, a lot of my time has been consumed with preparations and thinking of what to do. I’ve [also been] lucky to do some virtual projects in the summer and produced a documentary, a combination of interviews from earlier performances for the Colburn School’s [annual] SongFest. We’ve all had to reinvent ourselves and have had to learn a lot, but I have not been the hardest hit. 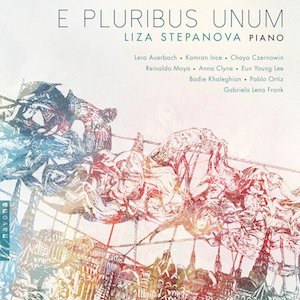 Obviously, a lot has happened politically since [2017], which has put this subject in a slightly different light. My album was in relation to the first travel ban that was before the ramped-up action at the border, the child separation policy, which has been horrifying. But it became personal for me through my students. [Iranian-American composer] Badie Khaleghian is on the CD and he’s supertalented, incredibly hard-working and such a giving person in our community. His parents were not able to travel for his graduation recital. I know that compared to everything that came after, this may seem like a smaller event in scope, but it still brought it very much home and seemed so wrong.

I thought I wanted to do a small part to support him, so I commissioned him for a piece and he wrote me this large wonderful piece [Táhirih The Pure]. It’s beautiful and was dedicated to a female [mystical poet, women’s right activist, and theologian Fatimah Baraghani] from his religion. I don’t presume to see myself in her — she lifted her veil in front of men, [which] was an act of independence, defiance — and that’s what the piece was about.

What other works on the album do you also feel a deep connection to?

There is a vast amount of great music by immigrants and one CD is nowhere enough to document it, but these are all pieces that spoke to me personally. Another work on the CD is by Reinaldo Moya, a Venezuelan-American composer who has some complicated personal story with immigration. He had written a piece in 2017 for the same reasons, The Way North. It’s a large 40-minute cycle that describes the journey of an immigrant from South to North America. It has several movements that chronicle what might happen on that journey and the obstacles faced. Some people walk long stretches or they hitch a ride.

I reached out to him and I chose two movements from that 40-minute work. “La Bestia” is something they call a train where immigrants would hitch an illegal ride. It’s dangerous and people get injured, so it’s sort of a violent piece that both describes a train [and] the violence of what happens. The other piece by him is “Rain Outside the Church.”

In fact, you made a video of “Rain Outside the Church,” in collaboration with the visual artist Kevork Mourad. Can you elaborate on that?

This is about a sanctuary church and is a real standout for me. It’s so beautiful and haunting. I had collaborated with Kevork before, about seven or eight years ago in an ensemble in New York. I was aware of his work — he’s also an immigrant from Syria, a country that has gone through so much turmoil, especially lately.

He also feels deeply about immigration and I reached out to him [and asked], “Could you suggest an art work I could use for the cover?” Part of his painting, Between Two Worlds is featured on the cover. It shows the people, the immigrants stuck between the old and the new place and the complexity of that. So it started with that. I know he works alongside a musician — he does a lot of that work live — and sometimes he creates videos and I asked him if he would collaborate with me. He said yes. I think it’s stunning, beautiful, and personal what he made.

You’re now an American citizen. Do you still have family in Belarus and how did this inform your choice of composers on the CD, which also includes London-born Anna Clyne, Israeli-born Chaya Czernowin, and Gabriela Lena Frank, who was born in Berkeley, California, to a mother of mixed Peruvian/Chinese ancestry and a father of Lithuanian/Jewish descent?

I do, but at this point it’s more extended family. I didn’t expect what has been happening recently in the kind of turmoil we’re seeing there. The situation has been bad for years — I’m learning all these adjectives — it’s been boiling over for years. But I’m multiple times an immigrant. First, I was to Germany at 13, then 11 years there and then to the United States. I’ve gone through situations where I’ve had to assimilate, get used to a new place, but it’s been a long, long time since I’ve been to Belarus.

I can’t say that that’s the turmoil that I fled from, but it gives me a little bit of an idea that I’m trying to imagine what would happen if I were there now. What prompts people to uproot themselves and their families to go on these difficult journeys and go someplace else? I don’t want the CD to be so much about immigration, but it’s a more personal focus and a celebration of these composers.

What originally sparked your interest in new music?

I can’t think of a time when I wasn’t playing new music. I started playing new music more in my graduate school at Juilliard, getting to know more composers. As a pianist, you grow up playing all of this music by people who are no longer with us, so the composer can’t be a collaborator. I think that becomes very clear once you are classmates with composers, because right there is your collaborator. That consciousness settles in and you become aware of the exciting possibilities. After that I never looked back.

What, in this moment, do we expect art to do and does the artist have a responsibility to do it?

This is a really broad question, and part of what we’re trying to debate in my class [are questions such as], What are we to do? What can we do? What should we be doing? I think art has healing aspects and aspects of self-expression. It can give voice to people and not just the artists themselves. Community projects can give voice to the community through the artists. SongFest has been part of my life for over a decade and I was associate director for two years. So much of these projects are in L.A. with [Vijay Gupta’s] Street Symphony, the Los Angeles Poverty Department, all of that work.

This kind of outreach needs to happen. Those of us who are more fortunate, I find myself doing a lot of self-reflection and then collecting all of our best intentions and trying to find small or big ways in which we can contribute.

Chuck Johnson Gets Romantic on Mound of Shards

The Oakland-based musician chats about his new album, the link between his electronic music and Chopin, and life with the coronavirus.

The virtuoso pianist talks about her life in music and her many projects to engage and encourage budding musicians.

Jeremy Denk Has a Lot to Say About Mozart