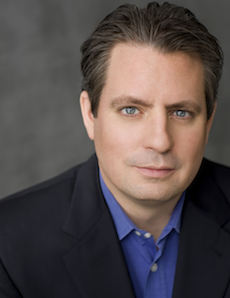 Matthew Polenzani returns to San Francisco Opera June 5-July 6 to sing the title role in Offenbach’s The Tales of Hoffmann. Often praised for his vocal beauty and elegance, the lyric tenor previously earned wide acclaim in the role at Chicago Lyric Opera; this production, which is new to San Francisco, is directed by Laurent Pelly and also features soprano Natalie Dessay as Antonia. Polenzani lives in New York with his wife, mezzo-soprano Rosa Maria Pascarella, and their three sons. He spoke to SFCV by phone about the challenges of Hoffmann, his approach to new roles — and what he has planned for future seasons.

So nice to have you back in San Francisco — particularly in Tales of Hoffmann.

It’s a terrific production, and I think audiences will be pleased. I’ve worked with Laurent Pelly before, and always enjoyed collaborating with him, so it’s very exciting for me to be doing it here.

What can you tell us about the production?

He’s looking at it literally. It’s interesting because we’re doing a different version of Hoffmann than people might be used to. There’s quite a bit of dialogue, and music that most of us have never heard before. For me, it’s almost like learning a completely different opera. I haven’t seen any of it yet — just mock walls and mock doorways — but from what’s been described to me, the Antonia scene is magical, and what they do with Olympia is very cool. I don’t want to give away too much, but it should be very entertaining.

Hoffmann is such an odd character in so many ways — so Romantic, and a little mad. How do you approach him, and what do you like about him?

In a way, it’s like his emotional growth has been a little stunted. He’s kind of an innocent guy. Even when faced with a courtesan and the secure knowledge that she would have no interest in a long-term relationship, so to speak, he passes right through that into the true love side of things. He’s a little naive in his belief that love is going to work. He is a Romantic, absolutely, and there’s a little screw loose in there. The common sense screw is not screwed all the way in. It’s a tough journey for him, because he’s up, he’s down. In this particular case, there are four (women); we have also Stella, and they’ve inserted music for her. So that’s four loves he loses over the course of the evening. It’s a hard road for him.

It’s interesting because we’re doing a different version of Hoffmann than people might be used to ... I don’t want to give away too much, but it should be very entertaining.

It’s also a bit of an endurance test for you. How do you muster the stamina for this role?

Yes, it’s a long night, but even in my repertory there are longer parts. The problem that Hoffmann faces is this emotional roller coaster. The worst of the anger comes at the end, when you’re a little more tired. I think the key is to somehow keep a modicum of emotional control so that you don’t completely lose it, especially at the very end, when he’s telling Giulietta ‘you betrayed me.’ He tells her ‘I want to crush you.’ Those are emotions we associate with the deepest kind of anger. To keep that under control — that’s the war. As a vocal night, though, this role sits quite well for my voice. It’s not like some other things that are very low or very high. This sits right in the middle of my voice. From that point of view, I don’t find it to be a long evening. When I did it the last time, I got to the end and thought, I feel good, I could sing another act or two. It doesn’t ask things of me that I can’t give.

You often move between Italian and French repertoire — earlier this season, you sang beautifully in the Met’s Maria Stuarda. Do you find it challenging to switch gears from Italian to French?

I pretty much approach every piece the same way vocally. Maria Stuarda is kind of a step outside the box. For me, anyway, it was a bit outside, tessitura-wise. It’s quite high, much higher than anything else that I sing. The only thing that comes close is Ernesto, which I pretty much quit in 2003. I only did it again when Jimmy [Levine] asked, when the Met was mounting it. I planned some time ahead of it and behind it, to get my voice to a place where it normally doesn’t sit. Stuarda is even higher, and more difficult, in many ways. I was singing Werther right before that, so I didn’t have quite enough time, but I eventually got myself into that place.

But from Maria Stuarda, or Nemorino, or Don Giovanni, or Così fan tutte, I don’t approach any of those pieces differently from a vocal standpoint. In Italian, you might hear a little more portamento, or a specific treatment of a word; in French you don’t hear so much portamenti. It’s not so slidey. It’s less of a vocal shift, and more of a mind shift, to bring forth a good French style, and keep the Romantic quality alive. You know, I’ve always said I can’t sing any louder or any softer than what is possible for me. So if the orchestra is too loud, it’s up to the conductor to make sure the balances are right. We pray we get a conductor who actually wants to do what’s written in the score. Patrick Fournillier, our conductor here, is very interested in this. He’s careful, so we’re not singing at the top of our lungs all night long.

Do you have a favorite scene in this opera?

I gravitate toward the Antonia act, because I pull closest to the feeling of true love that can be shared. But also, I think the music in that act — I mean, Miracle’s music, when he’s questioning Antonia but she’s not even there — it’s just very charged and emotional, and scary, which is the point. What Offenbach manages to do with colors and orchestration and melodic motifs — he really sets the scene. He does that in every act, but I’d say that’s my favorite.

Offenbach wanted one singer for all the soprano roles, although it’s not often done that way. What are your thoughts about this?

I think it’s a difficult road for any soprano, because of Olympia. I’ve never seen it actually done, although I remember that Mary Dunleavy did it, and I want to say that Joan Sutherland did it, although maybe only for recording. The real problem for the tenor is that you get a fresh voice with each soprano, and when they’re fresh like that, and you’re down in the third act, you’ve been singing already for three hours — well, it helps to remember ‘I can’t sing any louder, I can’t sing any softer, I can only do what I can do.’ But I think it would be interesting. I don’t know if Natalie [Dessay] actually did it — I know she considered it — but I think in the end she thought it would be too much. Sometimes they even split the villains up, too — you get Lindorf and Dappertutto in one, and Coppelius and Miracle in the other.

When did you first work with Natalie Dessay, and what kind of colleague is she?

We were just talking about this yesterday. The first one I remember was in 2006. It was Lucia in Paris. But both of us feel there was one time before that, and neither of us can remember. I remember all of these things because of my kids’ births (laughs).  She’s fun. I love being onstage with her. Beyond being a great singer, she feels every emotion so plainly. It’s almost impossible not to come along on the ride she’s on. It’s a great inspiration to watch her and feel the things she feels.

At some point you have to step away — not just to rest but to stretch it in a different way. This is what keeps a voice pliant and elastic ... I try my hardest to keep my calendar full of different things, not sing too much of anything, and I think that’s the key to being able to sing for a longer time with a healthy sound and technique.

Are you planning new roles in the coming seasons?

I’m taking Tito on for the first time next year in Chicago. I’m really psyched about that. I’ve avoided that part for a while — not because I couldn’t sing it, but because I wanted to have a breadth of life experience. What Tito goes through is difficult, and I didn’t think I had the experience to give him the gravitas he needs. I think I’ve lived enough now to face what he faces. I’m going to take Roberto Devereaux in a few seasons at the Met, and also La Favorita in Munich. I’ll have Bohème in about four years. I think it should be right for me.

The good news is, we can try things out, and if it isn’t right, we never do it again. At the same time, I’ve been careful not to take anything that’s a crazy leap into a direction that I don’t think is good for me. I’ve been asked for things — Tosca and Boccanegra — things where I want to say ‘were you listening to me as I was singing? Do you think that I sound like that kind of voice?' [laughs].  This is the great thing about our business. Everybody hears something different, and this is fun, because we can argue about who was great and who wasn’t. It’s good that people hear me and say ‘you should do this.’ But in the end, I have to be in charge of what I take and the direction that my voice takes. I wish that I’d sung Bohème at this point, because I love it so much. I’m 44 now, and I don’t think it would have been a mistake for me to have done it already. I’m glad that I’ve been careful and judicious about what I’ve sung, but there are a few pieces I would have liked to sing earlier. And that’s one of them.

You’ve been wise — we’ve all seen singers come to grief by taking the wrong roles.

Or taking them too early, or too often. If you’re singing Rigoletto or Bohème or Tosca all the time, no. At some point you have to step away — not just to rest but to stretch it in a different way. This is what keeps a voice pliant and elastic. You can’t keep doing the same stuff over and over. Eventually you get stuck and it’s hard to grow it that way. I have a great interest in Britten, too — I’m not going to do it anytime soon, but I’d like to sing Captain Vere someday. Stravinsky — I never got to sing Rake’s Progress. So I try my hardest to keep my calendar full of different things, not sing too much of anything, and I think that’s the key to being able to sing for a longer time with a healthy sound and technique.