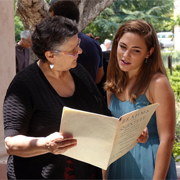 Music Academy of the West Returns to Its New-Music Roots

How many 70-year-olds successfully revive the spirit of their youth? Santa Barbara is home to at least one such septuagenarian: The Music Academy of the West. Founded in 1947, the festival has long been a prestigious place for young musicians on the cusp of professional careers to hone their skills. But in recent decades, it has hardly been a hotbed of new music.

That's actually a fair description of this year's festival, which continues through Aug. 5 at a variety of Santa Barbara-area venues. Premieres are sprinkled liberally throughout the many public concerts, and noted composers will be on hand to play, conduct, and/or talk about their work.

Patrick Posey, the festival's vice-president for artistic planning and educational programming, insists this actually marks a return to tradition. In its early years, he notes, the Music Academy hosted many composers, and gave many premieres. “As a performer of music by living composers, and frequent collaborator with living composers, that's something I really wanted to get back to,” he said.

Indeed, when he’s not working as an administrator, Posey, a native Southern Californian, is a saxophonist who has performed with the Los Angeles Philharmonic, Saint Paul Chamber Orchestra, and at the BBC Proms in London. When we caught up with him, he was just back from San Francisco, where he played a piece by Michael Tilson Thomas, Four Preludes on Playthings of the Wind, with the San Francisco Symphony. Our interview has been edited for clarity and length.

Why has the Music Academy of the West abruptly shifted its focus to include so much new music as part of this summer's festival?

Actually, for its first five years, living composers were a part of the Academy. Darius Milhaud was honorary director of the festival for four years. Roy Harris and Arnold Schoenberg were composers-in-residence. We had Virgil Thomson and Ernest Bloch here. So there was an intense, music-of-today component. A concert of Milhaud premieres in 1948 was covered by The New York Times.

This year, we formalized these steps we’ve been taking by launching our commissions and premieres program. We have 11 premieres this summer, and two more post-season. Nine of those are world premieres, and seven are Music Academy commissions. All in all, we’ll have 10 composers-in-residence over the summer.

What will they be doing?

Some are performing their pieces, like Joshua Roman and Timo Andres. Matt Aucoin will be conducting his work while he's here. Others, like Stephen Hough and Caroline Shaw, will be giving master classes in which fellows in our program will play some of their music. Many are also doing concert talks. We want our fellows, our audiences, and our faculty to have contact with the composers, and for the composers to get to know the unique culture of the Music Academy.

What was your thinking regarding how to integrate these works into the festival?

We have started to make music of today part of our normal way of doing business. We’re not restricting music of living composers to a far corner of the summer and calling it “new music week.” That sort of new-music ghetto is, to me, not the best way to present it. It suggests that new music is its own thing, and not connected with anything else. We think this music belongs on the same concert as Beethoven, Dvorak, and Stravinsky.

For instance, we will present a stadium concert in which Alan Gilbert and the New York Philharmonic perform Beethoven’s Ninth Symphony, and our own orchestra plays Gaby Frank’s Three Latin-American Dances. Gaby will be there on stage and say a word or two to the audience. Tickets to that concert are $10 and free for children.

We’ll have five or six thousand people, maybe, who have never been to a classical concert before. They probably think of composers as dead white guys. What they’re going to learn is that composing is a living, breathing art form. Gaby is a Californian and a Latina. [My hope is that first-timers will think] “I, as an audience member, have things in common with someone who is creating this kind of music.”

Are you hearing complaints from older audience members who would rather you stick to the classics?

Not yet. For me, it’s all about giving the audience context. Last year, we performed pieces by Caroline Shaw and Jim Stephenson to give our audiences a taste of their music in advance of their residencies here this year. That was so audiences would know who they were and what to expect.

Our audiences enjoy hearing things they've never heard before. A longtime board member of the Music Academy said to me after Tom Ades’ piece, “I hated it. But I’m glad you did it, and I can’t wait to hear the next thing you put on like this.” Art is supposed to cause you to feel something. It doesn't have to be a pleasant feeling.

Also, these composers all have different voices. We really want to show off all the different things new music can be. I’d like the audience members who say “I don’t like new music” to graduate to the point where they can say, “I don’t like minimalism, but I do like neo-romanticism.”

The next premiere on the schedule is a work by Pulitzer Prize-winner Caroline Shaw, which faculty members will perform July 5. How did that come about?

She was here in May with her vocal octet Roomful of Teeth. They gave a concert at the Music Academy sponsored by UC Santa Barbara Arts & Lectures. While she was here, we had dinner and I gave her a tour of the campus.

As we walked in the late-spring, evening sun, I was telling her about all the master classes we put on, and how they help create bonds between the musicians and audience members. She started to feel inspired, and asked, “Is there a room with a piano I can sit in for a while?” I put her in a piano studio. She sat down at a Steinway and she started tapping away, slowly, on an E. I left her to her own devices. A few weeks ago, the piece comes in, and sure enough, it starts with an ostinato happening on an E for the piano.

It’s a very personal piece. It’s called Broad and Free, which is taken from a line of a New York Times review of Fritz Kreisler at Carnegie Hall in 1905. There are little quotes from famous pieces Kreisler was known for. It will be performed by pianist Conor Hanick and violinist Kathleen Winkler, who is in her 25th year as a Music Academy faculty member. Caroline studied with her as an undergraduate at Rice University. I wonder if those quotes are things Caroline has memories of from her studies with Kathy. I’ll ask her when I interview her in the pre-concert talk.

Among the people you are bringing to campus this summer are a number of composer/ performers, including pianist Stephen Hough. That tradition appears to be making a comeback. Are you trying to give your fellows role models -- showing them that you can do both?

I don’t know how many compose or want to compose, but yes, absolutely, we're trying to give them role models. I feel the Music Academy is sort of a finishing school for trained classical musicians. It’s their last stop in summer festival land before one gets a job. We have 137 fellows this year, drawn from an applicant pool of 1,967. They’re from different schools around the country and around the world.

As an eight-week summer program, one thing we want to provide is to give them access to different ideas they may not have come across, different paths they may go down. That includes exposing them to excellent performers like Joshua Roman or Stephen Hough who write their own stuff. We want them to see that’s an option.