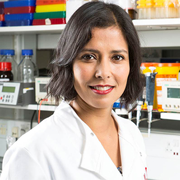 The Passions of Nazneen Rahman

Nazneen Rahman grew up in England, the daughter of non-musical, academic, Bangladeshi parents: her father, a doctor; her mother, a teacher. In the isolation of a nuclear family that included an older brother and younger sister, with no other relatives in the country, Rahman was good at sports and excelled in science. She completed her degree in medicine at Oxford University in 1991, undertook training as a resident in Oxford and London, and earned a Ph.D. in Molecular Genetics in 1999.

Today, she is Professor Rahman, age 50, head of the Division of Genetics and Epidemiology at The Institute of Cancer Research in London and at the helm of the Cancer Genetics Unit at the Royal Marsden NHS Foundation Trust. Her research focuses primarily on breast, ovarian, and childhood cancer susceptibility. Her work involves initiatives to integrate gene testing with mainstream cancer services to increase safety and efficacy. In 2016, she received a CBE (Commander of the British Empire) from the Queen, for her work.

What do science, genetics, and cancer have to do with music? Everything.

Inexplicably, Rahman, from her first conscious moments, was preoccupied and fascinated by music. “I begged my parents for piano lessons and finally got them, at age eight,” she says in a phone interview from her home in England. “I had a totally non-musical family, but I was always singing. I’m not sure why.” She took up songwriting at age 14, crafting her first “real song” that had an identifiable beginning, middle, and end. “I can’t remember a time when I didn’t write songs. It was called something like “Now You’re Gone.” It had emotions that were slightly melodramatic because I was 14,” she recalls.

Her parents and even she herself thought of her music as a sideline. As long as it didn’t interfere with her studies, it was allowed. Other than piano lessons for eight years and the ability to sight sing, Rahman has no formal voice training. Instead, she has the good fortune — or a recessive gene — to have a wide vocal range, a natural ability to harmonize, and well-supported tone throughout upper and lower registers that critics describe with words like “sultry, velvet, tender.”

The music that had been a sideline became “much more than a hobby,” and eventually she began singing her music in clubs, where she discovered that people would pay money to listen to her. And in 2013, she began to record, putting out a four-song EP of standards, My Funny Valentine.

Rahman listened to music eclectically while growing up: Kate Bush, Annie Lennox, Prince, George Michael, Billy Holliday, Nina Simone, Ella Fitzgerald, and others. “They were clearly doing what they wanted to do. Whatever that was, the image had authenticity. It was often surprising. I like brilliant vocalists.” And she likes singers in whom she hears pain, love, longing, loss—emotional authenticity over clear or grand vocal gymnastics.

Although she values genuineness above all else, her songs are not exclusively autobiographical. It bothers her that, because her lyrics are detailed and tell stories — and because she is a woman — assumptions are made. “People think they are autobiographical, but they don’t say that about actors who capture a character.” And they don’t say it as often about male songwriters. “With female songwriters, it is done even more often because it’s the fashion at the moment —confessional songwriting. But also because of sexism, as if women don’t have the emotional, intellectual, or cultural range to write that way.”

Her first, full album, Can’t Clip My Wings (2014) dealt with themes of loss and had only piano accompaniment. A second album released in June, 2017, Answers No Questions, is about choice. The theme, stylistic range, and production demonstrate a kind of freedom. “I don’t need you anymore,” begin the lyrics on the album’s first track, “Everything Must Change.” Other tracks include strings, piano and percussion, some of it provided by her 22-year-old son, who is “very musical, plays sax, guitar, keyboard, and provides vocals and also is in university studying as a data scientist,” according to Rahman.

During production of her debut album, Rahman says she became a songwriter. With Answers, she felt she was a songwriter and experimented with more sophisticated engineering. She self-released and took command of the marketing of the album. “The first time, I had more thought about whether or not to share it. I was embarrassed to share, actually. I’m not sure what I’ll do with the next one, but with Answers, I want more people to connect with it. Promoting it is a lot of moving data around: residual files with all the information and unique codes, getting them processed onto iTunes and Spotify. It’s what I do with genetics data, so it’s the same principles.”

The connection is more than digital. As a groundbreaking cancer researcher, Rahman knows vision is the first step, followed by meticulousness to deliver a tangible result. It’s the songwriting process applied to science. With words—her first love—always banging around in her head, direction for a song arrives without warning, but not without rumination and hard work to fine-tune the structure. “I’ll be cooking and go in and sit at the piano and work on a thought until it will gel. Words are always kind of around me. In airports, when I have time sitting, they will come. Largely, I just wait for them to come to me. Lyrics pop into my head if I don’t focus on them. It’s better not to chase it.”

And with songwriting, it’s best to work alone. Advanced genetics research requires a top tier team. Although Rahman writes the final reports and papers, she consults team members from start to finish. “In some ways, the fact that in my normal work I lead big initiatives makes it essential that my music is different. I can say, ‘This is what I’m saying and I’m not changing it,’” Later she adds, “I do my thing. People like it or they don’t. I don’t have a facility to temper it: I’m an emotional singer and I’ve become comfortable with that. I’m overflowing with songs. While it lasts, I’m keen to do it.”