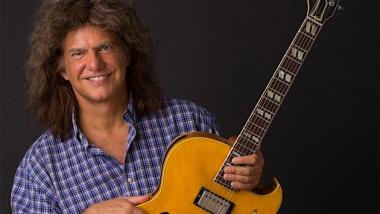 When guitarist Pat Metheny dove into the international jazz scene in 1974, he made quite a splash. An early explorer and innovator in the use of synthesizers and technology, his signature silky, shimmery, and ethereal soundscapes instantly transformed the sound of traditional jazz guitar into something new. His ability to float seamlessly and easily through complex chord and rhythm changes while blending multiple music genres made him instantly popular in the jazz world, a popularity that crossed over into the mainstream. 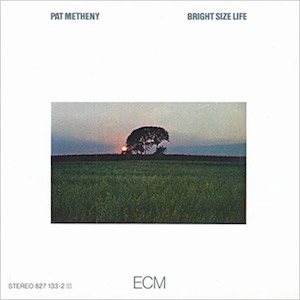 A 20-time Grammy Award winner, Metheny, 64, was born in Kansas City into a musical family that favored trumpets, which he started playing at age 8. He switched to guitar at age 12, and soon became enamored with jazz. Practicing for 10–14 hours a day, by age 15, he was sitting in with some of the best Kansas City jazz musicians. At 19, he became the youngest teacher ever at the Berklee College of Music in Boston, and at 21 he recorded his first album, Bright Size Life. In 1978, he released his debut album as the Pat Metheny Group, featuring Lyle Mays on piano, an incredible collaboration that would venture into glorious new musical territories over a period of years, showcasing Metheny's masterful technique and endless creative capacity.

Metheny has been a constant creative influence on the music scene for more than four decades, and has never stopped exploring and experimenting. Around 2009, he began what he called The Orchestrion Project using an instrument that he commissioned to be made (modeled after the 19th-century invention), which mechanically hooks up to a variety of instruments via solenoids and pneumatics, and is controlled directly by Metheny through his guitar. Take a moment to see and hear it at the Orchestrion Project — it is amazing.

Recently inducted as an NEA Jazz Master and into the Downbeat Hall of Fame, Metheny is currently on his “An Evening with Pat Metheny” tour, along with Malaysian/Australian bassist Linda May Han Oh,  British pianist Gwilym Simcock, and drummer Antonio Sánchez. He will be making a stop at the Fox Theatre in Oakland on October 25 for Cal Performances.

Metheny answered some of my questions recently via email about his long and prolific career, and some of his views about music — and life.

How did you learn to play guitar and become so accomplished at such a young age?

As the years have gone by, I find myself wondering more and more about that. I was really serious about the music right from the very beginning. I really wanted to understand what it was that made the best improvising musicians stand out in such stark relief to all the other music I had heard. In a lot of ways, that basic quest is exactly the same for me now as it was then.

Mostly I would say I was really lucky to be near the community of musicians around Kansas City who gave me the opportunities to work with them. I can trace almost everything I am as a musician to the people I was on the bandstand with during those years, who to this day, are some of my favorite musicians ever.

You developed a very distinctive guitar sound from the beginning. What creates that “Pat Metheny” sound?

I am interested in the spirit and sound of music itself. I really just try to honestly represent in sound, the things I love about music.

As far as “my sound” goes, I always try to let the music at hand decide what direction I go in, in terms of orchestration. I am pretty happy to play in a really dense way, or a really sparse way, or really loud, or really soft, or all over the dynamic range, really inside the chords or outside the chords — whatever seems to sound best for what is happening at that particular moment.

The sound follows the ideas for me. I try to come up with a sonic approach to each situation that fits with (or sometimes goes against) the tradition and concept of what the setting seems to be asking for. The result has often led to many specific sounds that are particular to technical things, but regardless, I think the good thing is that people seem to always be able to tell it is me.

Why did you decide to tour now, without a new record?

It is hard to know anymore exactly what impact records have on things. Even for me, I never really know when someone does or doesn’t have a new record out. The days where that was the driving force behind everything seem to have changed. What never changes is that you have to keep your eye on the music and play every gig like it is the last time you will ever play, and do your best to sound good. That has always been my focus, and I have never worried too much about the other stuff around the music.

What can people expect to hear on this tour?

The concept this time is simple — to put together a really exceptional group of musicians and write some music for them, but additionally, to have them also be able to play anything from any point in my career as well.

The concerts are very long and cover a lot of territory. I am sure people who have followed my thing over a long time will enjoy it, and by the same token, someone who is really not that familiar with any of it, hopefully will too.

Tell me about the musicians you chose for this tour.

This is an excellent live band — each person on the bandstand is a really great player. We are playing lots of music of mine that I haven’t played for a while and Linda May Han Oh and Gwilym Simcock really understand the range of my thing across the entire spectrum — and Antonio Sánchez remains one of the greatest drummers of this or any era.

I used this band as the core on a new project with orchestral musicians of all new music that we recorded recently that is very ambitious. We have been having a great time playing together over these past few years.

Will you be using the orchestrion on this tour? Are you planning any more touring or recording with it?

No, not for this tour. However, that was an incredible learning experience, and also really a lot of fun. And yes, I would love to continue to explore that area. I really believe that the idea of a 21st-century front end with a purely acoustic output is a rich tributary that has hardly been explored, even now, 10 years after The Orchestrion Project.

What was great about it for me was that I had no idea what I was doing, which is kind of my favorite place to be. Since no one had ever done anything like that before, there were no markers to follow. But with what I know now, both technically as well as what works best musically, I am excited to continue the research in that area. I still think it is four or five years away though.

What is it about music that has kept you engaged in it all your life?

To me, music at its best is transcendent — it is a reminder of where we were before being here, and what awaits after. How each culture adopts or ignores the reality of music is kind of irrelevant to what music actually is. Many aspects of music exist on a slightly different grid, one that is maybe only visible to a certain kind of individual. I think it has always been that way.

Many people may hear the superficialities of it, but the undercurrents that make something great tend to manifest themselves in different ways to different individuals within cultures as time goes on, even if the notes stay exactly the same.

The musicians who I have admired the most are the ones who have a deep reservoir of knowledge and insight — not just about music, but about life in general, and are able to illuminate the things that they love in sound. When a musician can do that on the spot, as an improviser, that is usually my favorite kind of player.

You tour a lot. How do you balance your professional career and personal life?

Balance is the most important thing for me, in music and in life. I am always trying to get it together. Being a musician is great, but it is getting close to the point where if I never played another note, that would be fine too.

No Strings Attached: The Independent Spirit of Guitarist Sharon Isbin

En route to the Bay Area for a few gigs, the master of the six-string chats about music, rocket science, and the trajectory of her long career.