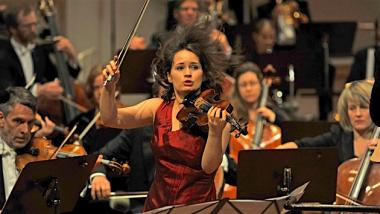 The souvenir button struck for the 2018 Ojai Music Festival identifies the festival’s music director-du-jour simply as “PatKop.” For all practical purposes, the name Patricia Kopatchinskaja may be too long to fit comfortably on a button, so PatKop it is. But habitual pilgrims to this long-running, compulsively adventurous little festival will get used to saying her full name quickly enough.

Kopatchinskaja, 41, was born in Moldova back when it was part of the Soviet Union, but now lives in Bern, Switzerland, where she once studied music at the Hochschule der Künste. She is not your usual type of star solo violinist, trotting around the world playing the same handful of concertos and sonatas. Rather, she is a dedicated fan of new and unusual music, and she likes to construct programs with a theatrical element.

“I am on a permanent mission for composers like Galina Ustvolskaja, György Ligeti, György Kurtag, and Michael Hersch,” Kopatchinskaja said in an e-mail from Switzerland. “Fortunately, two of them (Ustvolskaja and Hersch) had never been played in Ojai, also Ligeti’s Violin Concerto is new for Ojai, as are the monumental Kafka Fragments for voice and violin by Kurtag. So these four composers became an obvious backbone for the program. But also Horatio Radulescu’s Before the universe was born, Georg Frederick Haas’s String Quartet No. 9 written for the JACK quartet, Hans Abrahamsen’s Schnee — all that will heard for the first time in Ojai.”

The Ojai Festival — as well as its run-out reprise for the Bay Area, Cal Performances’ Ojai At Berkeley —  will lead off with one of Kopatchinskaja’s semistaged special projects provocatively titled “Bye-Bye Beethoven,” which presents her views on what she calls “the irrelevance of the classic concert routine for our present life.” Others ideas for thematic programs, presented in Ojai only, include “Dies Irae” and “A Devil’s Bargain and Other Delights.”

Along the way, the Berlin-based Mahler Chamber Orchestra will be featured in its first extended U.S. residency and the JACK Quartet will play at Ojai for the first time. There will be a world premiere in both the Ojai and Berkeley editions of the festival: Michael Hersch’s dramatic narrative for two sopranos and eight instruments, I hope we get a chance to visit soon. As has been the case in recent seasons, the Ojai edition will be crammed with music, with programs starting as early as 8 a.m. in the morning and running until nearly midnight.

(It may also be worth noting that three of the next four Ojai Festivals, starting with this one, will be directed by women; Barbara Hannigan will be the music director in 2019 and Mitsuko Uchida takes over in 2021. This was, of course, all decided and set in stone well before the #MeToo movement got rolling late last year, but the timing is still uncannily right.)

Answering questions via email, Kopatchinskaja gave us some more ideas of what to expect this year at Ojai — and not without some feisty commentary.

How did you first hear about the Ojai Festival?

When I premiered Michael Hersch’s violin concerto with the Saint Paul Chamber Orchestra in 2015, the former manager of the orchestra Bruce Coppock told me about Ojai. Also Tom Morris, the artistic director of the Ojai Festival, was there, and that’s how our collaboration started.

Do you know of any other festivals in the world that resemble Ojai?

For innovative spirit and openness of that degree and age, having its roots in such [composers] as Schoenberg or Stravinsky, I don’t think there are any similar ones.

When I saw previous programs from Ojai, I was perplexed — so many names were completely new to me — and I’m so thankful to have encountered through it such genius musicians as Claire Chase or Tyshawn Sorey, the ICE, and many others. They are the future! Not the orchestras programming Tchaikovsky, Dvořák, and such. They are the same all over the world.

What do you mean by Bye-Bye Beethoven?

If you only are allowed to play old works in old ways, this creates a sense of oppression or of choking. At least I feel this very much. This became so overwhelming for me that I needed to put it on stage somehow, which I did with the Mahler Chamber Orchestra. We invented the title “Bye Bye Beethoven” together with them.

What is the “classic concert routine” and why is it irrelevant to our times?

If in a concert you not only know every work, but also how it will be played and you also know beforehand that at the end it will have been “very beautiful,” I frankly do not know why I should go to such an event — and I consider it not as a part of, or relevant to, real art. I go for surprise, astonishment, enrichment, new experiences.

After Schoenberg, playing and loving contemporary music in classical music institutions needed moral courage. Many old-fashioned musicians, especially in orchestras (and you’d be astonished how many there still are!), say to someone who plays mainly contemporary music, well, this musician probably can’t play classical music well enough so he has no choice. They consider new music not better than a senseless noise. Many considered it a fetish of crazy people, a dying dialect of a small island. But we all have to learn and use it again in our everyday life.

How does the title “Dies Irae” relate to the global warming issues that you are planning to bring up in Saturday night’s program?

“Dies Irae,” the Latin Hymn from the 13th century starts like this: “Dies irae, dies illa, solvet saeclum in favilla ...” is translated  “Day of wrath and doom impending, heaven and earth in ashes ending ...”  Whoever believes that this is a Chinese hoax could be sadly mistaken.

What is the overall concept behind “A Devil’s Bargain and Other Delights”?

There were several aims. First we wanted to give the Mahler Chamber Orchestra a platform to show some of their preferred repertoire without conductor.

Now Ligeti is one of the most important composers of all time, and his Violin Concerto sums up his life’s work and much of musical history. This concerto definitely had to be the end point of the festival. Playing it feels like being a tightrope dancer doing acrobatic acts while you are watched from below by such luminaries as Machaut, Gesualdo, Stravinsky, Bartok, Pygmies, Hungarian and Balkan folklore. But I also imagine his dead brother listening. He played violin and was killed in the concentration camp by the Nazis together with his father.

Do you plan to attend all of the weekend concerts all day and virtually all night?

Of course I will be there, precluding accidents or emergencies. Absolute musts are Markus Hinterhäuser playing all six Galina Ustvolskaja piano sonatas, the JACK Quartet, and Michael Hersch’s première.

There is a lot of music to absorb in such a short time. How should concertgoers to Ojai go about adjusting themselves to this pace?

There is the wonderful West Cork Chamber Music Festival in Ireland. When I played there many years ago, I met a beautiful Dutch couple, supporters of the festival, a big blond-and-blue-eyed jumbo-jet captain with imposing mustache and his breathtakingly elegant wife. For eight days they attended four concerts a day. They told me that for the rest of the year, they never went to concerts. Perhaps that’s the way to navigate Ojai.  After such a meal you’ll definitely have to fast.