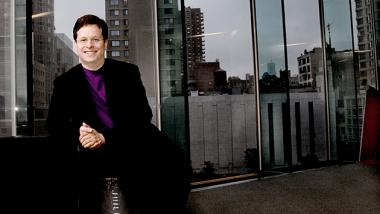 His seat at the concert organ has long served as Paul Jacobs’ pulpit for advancing the role of that largest of instruments in symphonic and other classical musics. Now the chair of the organ department at The Juilliard School (where, at age 26, he became one of the youngest-ever faculty appointees in 2003), Jacobs was appointed head organist of the Immaculate Conception Catholic parish in Washington, Pennsylvania, when he was just 15. He went on to double-major in organ and harpsichord at the Curtis Institute, then to a master’s degree at Yale.

In addition to his global appearances at concerts and festivals, Jacobs has brought the organ repertoire, from the 16th Century to the present, to audiences in all 50 of the United States. His recording of Olivier Messiaen’s Livre du Saint-Sacrament, on the Naxos label, won the 2011 Grammy for Best Instrumental Soloist Performance, the first and only such win by an organist. A repeat visitor to the San Francisco Symphony, with whom he’s toured music by Lou Harrison and Mason Bates, Jacobs will be presenting Messiaen’s Livre at Davies next Sunday. He spoke with SFCV by phone from his New York home.

Do I gather that you’ll be performing the Livre non-stop, and without intermission?

You are correct. And the work is nearly two hours in duration.

Well, you already have a reputation as a Marathon Man. You did an 18-hour non-stop concert commemorating the 250th anniversary of Bach’s death, as well as a nine-hour performances of the complete works of Messiaen.

[Chuckles] I have become completely enveloped in the music of Messiaen, so much so that time stands still. I’ve had a love affair with that music since my teenage years.

What was your first crush?

“Dieu parmi nous,” the final movement of his Nativité suite. I was struck by something sublime, that moved me more deeply than any other musical encounter. The musical vocabulary was startling and voluptuous. And ultimately terrifying! There is an element of fear in encountering art, and it reaches towards the infinite.

What will we experience over the Livre’s two hours?

It’s not only musically organized, but theologically organized. It’s referring, of course, to the sacraments of communion, one of the great mysteries of the Catholic faith, to which he was an unabashed adherent. He organizes the first four movements as an act of adoration before Christ. Movements five through 11 are the mysteries of Christ, followed by, beginning with movement 12, prayers of Christ, through the Holy Sacrament, and that takes us to the offering and the final Alleluia. Messiaen carries us on an extraordinary journey of sound and color, and through his music we are carried into the presence of the Divine — if we’re willing to trust him.

The composer himself said, you don’t need to share my faith to be moved by my music. But I believe that religious questions are fundamental to human existence. Our time in history, especially among intellectuals and academics, tends to be highly skeptical of those possessing religious faith, and I have myself continue to wrestle with those questions.

Does music help you wrestle?

Are there birds in the Livre?

[Chuckles] Oh yes, there are, the birds sing and flutter throughout the work. The 15th movement, “La joie de la grâce”, is dedicated to these joyous creatures. Messiaen claimed they were the greatest musicians.

Is the organ best-suited to Messiaen’s world view, including his embrace of the sounds of nature, and your own explorations?

Most certainly, because the organ has the widest dynamic and pitch range of any instrument, and is able to conjure up the most impressive span of expression. Messiaen was inventive with his indications for registration, pulling stops and combining tones to create unusual effects. In certain passages of the work, if you close your eyes, you might think you’re in an aviary!

How does that work on the console?

The high-pitched flutes and colorful mutations enable the organist to conjure up birdsong most effectively.

Messiaen studied with both Charles-Marie Widor and Marcel Dupré. Is he counted an heir of the French Romantic Organ School?

Messiaen follows logically in that noble tradition, inheriting the torch which was passed along to him but taking it in most unexpected and unusual directions. It was the Cavaillé-Coll organs which inspired French composers, from the 19th Century through the present time.

They’re known for their rather unique beauty, and their ability to rival the modern orchestra in its power and dynamic range and variety of timbre. The fiery reeds were a distinguishing feature.

What about the organs at the Church of St. Mary the Virgin in New York, where you recorded the Livre, and at Davies, where you’ll be performing it for us?

No two organs are alike. The instrument at St. Mary is not particularly massive, but packs a powerful punch. It bears certain resemblances to the French organs, but I would say it diverges in that certain stops are perhaps a bit ‘American’ in their accent, more sensuous and sweet, and — dare I say — more refined.

The Davies organ I’ve played many times, and it’s beautifully suited to this composition. It can rush the listener, when necessary, as well as caress the ear. And it has all of the registers that the composer requests, and then some. So I’m able to be imaginative, and in some cases deviate from what the composer requested, to enhance effects I believe the composer was after. I might choose to use a ghostly set of strings, instead of the keener, brighter ones that Messiaen would have known. Organists must be flexible, and we know Messiaen himself was not stifled by rules.

Your press materials portray you as an advocate for the organ’s place in the public ear. What’s kept it from being heard?

A rather rigid dogmatism among many organists in previous decades, and a lack of desire to communicate with the general music lover, as opposed to merely playing for one’s colleagues. I encourage my students at Juilliard to think about ways to build bridges from the organ world to the broader world of music. They should seek out opportunities to collaborate with other musicians.

The organ can be a very lonely instrument to play, because it is so complete. But there is a significant amount of chamber music for organ that deserves to be played and heard, and I would also encourage organists to commission new music. I require my own students to pair up with young composers who might be intimidated by the organ. The instrument does have a lot of intellectual baggage, which can seem daunting.

You yourself have commissioned and performed new music.

Those who wrote for the organ in the 19th and 20th Centuries tended to be organists, but young composers today are remarkably open. I’m happy to name Mason Bates, whose music I’ve premiered, and Christopher Theofanidis and Michael Daugherty. In 2016, I’ll premiere a new organ concerto by Chris Rouse, and Wayne Oquin wrote a solo piece for me, which can be heard on the internet. He’s been commissioned to write a piece for organ and orchestra, which I’ll do with the Pacific Symphony next season.

Does it help an organist’s cause to be thought of as “charismatic”, as both you and Cameron Carpenter have been described?

He’s a former student of mine, I have high regard for him. We’re actually of different temperaments, and on some levels have different objectives, but we both are united in broadening the audience for organ music.

Is it also important for audiences to get used to the organ outside church walls?

It would not be fair to diminish the organ’s role in the church, where it has served faithfully (quite literally) through the centuries, and it could be argued that its natural home is in a sacred setting. However, I am a staunch advocate for organ music in secular venues — concert halls, civic halls, museums, even homes. The organ has a life everywhere.As a musician, I fear that our never-ending exposure to background music contributes to our becoming dangerously numb to contemplating beauty and its mysteries.

But you’ve been known to be skeptical about popular culture.

Popular culture has its strengths. But if we care about our culture, we must be willing to criticize its flaws. Despite great strides in science and technology, I believe that our age is characterized by a general lack of contemplation or reflective spirit, especially concerning ultimate things, and perhaps this is the consequence of becoming increasingly secularized. As a musician, I fear that our never-ending exposure to background music contributes to our becoming dangerously numb to contemplating beauty and its mysteries. Incessant noise drowns out the marvelous silences of Heaven.