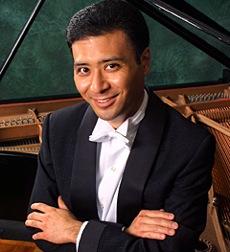 Jon Nakamatsu is the epitome of “local boy makes good.” He burst on the international music scene in 1997 when he was named the Gold Medalist at the Tenth Van Cliburn International Piano Competition. He was certainly an unexpected winner; he had studied with one teacher since he was 6 years old, he had neither attended a music conservatory nor studied music in college, and he had a full-time job teaching German at a Mountain View high school. Although he now spends much of his time performing around the U.S., Europe, and Japan, he still lives in San José. Bay Area audiences will have a chance to hear him play locally when he performs this weekend as part of the Music at Kohl Mansion series.

You’ll be playing at Kohl Mansion [in Burlingame] on April 18. Have you performed there before?

I’ve been there, but never played there. It’s not a big room, so it will be nice to play music that was written to be heard in that setting.

You’re performing Clementi, Schumann, and Chopin. What made you choose these works?

For Schumann and Chopin, it’s their 200th birthdays. Also, these are pieces that work together and take the listener on a very complete and satisfying journey. One of the neat things about programming is finding the congruity in a program and taking the audience on an emotional ride.

One thing that may not be as well advertised is that you’re also doing an outreach program, a “Musical Conversation,” at the San Mateo Library the evening of April 19. What will that be like?

I’m there the next day, yes. Usually at an outreach program like this, it’s a chance for people to ask about anything they want. Concerts are one way of communicating with an audience; this is yet another way.

I’ve also seen your talk on the Loser’s Club (on YouTube), which is great and I highly recommend it. You had lots of rejections over the years. What kept you going all those years?

The key was the great support given me by my teacher. She always believed in me, as did a number of other people.

You certainly didn’t come by your musical career in the “normal” manner, as most high school German teachers don’t end up winning the Van Cliburn competition. Did teaching high school in any way help you prepare for the concert world?

You bring everything in your life to what you do on stage. It informs your playing in a way that’s only positive.

Teaching taught me to be prepared and about working. I also found the social aspect of teaching beneficial. The modern soloist is not the fabled naïf. Today, a lot of what we do is outreach and interviews. Students don’t realize how much of your life is beyond just a concert performance.

What drew you to studying German instead of music in college, and why did you choose a regular university rather than a conservatory?

I wanted to learn another language, to be able to read it and understand the culture. German attracted me because it helped broaden my interpretation of the core repertoire. I’m also not good at math.

As for not attending a music conservatory, I realized that it didn’t appeal to me and that a regular university was a good solution. And I had my own private support for my music away from an academic career. But that was me. I don’t believe that everyone has the same situation, and everyone should choose what works for them.

I often ask musicians what they would be doing if they hadn’t become full-time musicians. Obviously, you had a Plan B solidly in place fairly early in your life and, in fact, were actively pursuing it. But is there something else that you now think might also have been a great career choice?

One dream was to fly and become a pilot, but then that required math.

The classic belief is that music and mathematics go hand-in-hand.

I’m not good at math. I think it depends on the person. The brain’s creativity works the same way, but in someone like my father, who was an electrical engineer, the result is the solution to an engineering problem, which I could never see, rather than music or language.

I loved teaching and foreign languages. I love to travel, and my wife and I sometimes talk about if we couldn’t have our current life, maybe we could be in the diplomatic corps.

So the musical career is still fun?

I enjoy the travel; I don’t find it tiring. And at the end of the trip, I get to play great music in great places.

Is San José still home? What do you do in your free time?

San José is still home. Free time is rare. I spend about 80 percent of my time traveling, so when I get home, I spend time catching up, seeing friends and family, relaxing. Sometimes I just want to vacuum.

Where do you see classical music heading?

Stars and famous people will have their day, but the sustaining power is the music. When something is substantive, durable, and real, that’s what fuels immortality. It’s the future which will determine which music will last.

There will always be an audience for this music. I don’t know the size of the music or how it will be marketed, but the art form will survive.

Performances may change, as people may not be as willing to see something at night, all dressed up and formal. But people would enjoy the music if given the “in.” Classical music is for everyone.

About 99 percent is classical: chamber music, voice, instrumentalists. I’m also listening to stuff from the ’70s and ’80s.