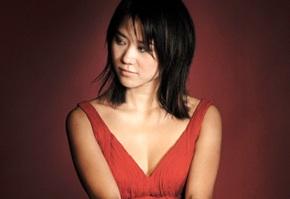 “You’re going out a youngster, but you’ve got to come back a star.”

That famous line from Busby Berkeley’s classic song-and-dance musical 42nd Street could easily be applied to the career of the Chinese pianist Yuja Wang, who suddenly found herself cast into the spotlight at age 20 when a veteran performer, Martha Argerich, fell by the wayside.

It was March 13, 2007, when Wang (looking like one of those Anime waifs) strode on stage at Symphony Hall to perform Tchaikovsky’s Piano Concerto No 1 with Charles Dutoit and the Boston Symphony Orchestra. By the time the performance ended, she was a star.

Born in Beijing in 1987, she began playing the piano at the age of 6, urged on by her mother, a former ballerina. She attended the Central Conservatory of Music in Beijing. She then moved to Canada, where from 1999 to 2001 she attended the Mount Royal College Conservatory in Calgary. Her next stop was the Curtis Institute of Music in Philadelphia, where she studied with Gary Graffman, graduating in 2008.

Since her triumph in Boston, Wang has become one of the most sought after and critically praised pianists of her generation — an artist of the keyboard with a reputation for floating like a butterfly and stinging like a bee. Her faster-than-warp-speed rendition of Flight of the Bumblebee is a favorite on YouTube.

Unfortunately, Wang’s demanding schedule of worldwide performances and recording sessions (for Deutsche Grammophone) has taken its toll in the form of a hand injury and, ironically, cancellations. As recently as June 2, Wang was forced to cancel a series of concerts with the Pacific Symphony in Costa Mesa and was replaced by — who else? — another “youngster,” the 16-year-old Conrad Tao. And as this article was being published on June 7 Wang cancelled her June 21 solo recital, the last concert of her two-week residency with the San Francisco Symphony. The other concerts will go on as scheduled.

When San Francisco Classical Voice spoke to Wang by phone at her home in New York City, she was confident that she was completely rested, physically strong, and looking forward to her upcoming concert and recital residency with the San Francisco Symphony.

I was looking forward to seeing you perform in Orange County. What happened?

Yuja: The Greatest Russian of Them All?

Is this the same problem that caused you to cancel your concerts a year ago, including your San Francisco recital?

Pretty much. I saw the doctors and they said it’s not that serious. They said it’s just tired muscles. They gave me some painkillers and said I needed to rest. They said I’d been playing too much, because I’ve been playing lots of concerts. I needed to rest — not just my hands, my whole body. I’ve also been flying a lot and the time differences are really exhausting.

Do you think young musicians are sometimes pushed too hard because they are a phenomenon and everyone wants to see them?

It’s really the responsibility of the artist and the manager to make sure they don’t book too many concerts. But you never know until you try it. I thought the schedule my manager planned for me was pretty doable. But now I realize I have to be much more cautious because I don’t want to be pushed to hard. That’s why I’ve been canceling.

Is part of the learning curve for a young musician being able to say, “No?”

Oh, yeah. In the beginning, I was saying “yes” to everything. It’s definitely easier and more important now to know when to say “no.” As I’m getting older I realize my body is a fragile thing.

Have any of your colleagues given practical advice about your career?

Actually, not much. I’m looking for someone like that, a mentor for guidance. The only person I have like that is my manager, who I have been with since I was 16.

Do you remember when you were first attracted to classical music?

My first attraction to music was from my mother. She was a dancer and she took me with her to a rehearsal. They were dancing Tchaikovsky’s Swan Lake. I thought it was so beautiful. There was a piano in our house and my mother told me I could do all those orchestra pieces on the piano. She started giving me lessons.

There’s been a lot of publicity lately about “Tiger Moms.” Was your mom a Tiger Mom?

[Laughs] No, she’s more like a Rabbit Mom. My father was a percussionist, but he was traveling around a lot, so I hardly got to see him. It was Mom that brought me up. She encouraged me to play the piano. I also went to dancing class and poetry class and calligraphy class. But those were my own interests. She didn’t force me to do those things.

Have you continued with those things?

No. I wish I had. But when I went to the conservatory, I stopped. I just saw Kung Fu Panda and it reminded me of all that Chinese teaching. I miss that.

Your schedule is so intense. What do you do to escape?

I do various things. I’m just getting started with cooking. I think that will be a good way. I love reading and I love chanting. I can read and chant at the same time. Actually, practicing is the best way to get away. It’s very meditative.

But at the same time you can’t overdo your practicing because of the stress to your muscles. Isn’t that right?

That’s true. But I don’t practice “Bartók 2” all the time. [Laughs] I play Chopin nocturnes, and Bach. I play things for my own enjoyment, not necessarily things I am going to be playing in concert. I have this reputation for playing fast, so people expect that. But that’s not how I think of myself, artistically. I can play slow.

Is there new repertory you are looking at for future concerts?

I’m always looking. Lately I’ve been looking at Tan Dun’s music, and I have been talking to him about some ideas. I’ve also commissioned Mason Bates from the Bay Area. He is writing a 15- or 20-minute solo piece for me that I was supposed to play in San Francisco next week, but he’s not done yet. So I’ll have to wait to premiere that piece. I am also interested in 20th-century music.

Other than the Bartók and Prokofiev you play?

That’s old! [Laughs again] I love Ligeti, and I am looking at Christopher Rouse; he’s thinking of writing a concerto for me. And then there’s John Cage, who I find fascinating because so much of his music relates to the I Ching. I’ve also been looking at the second Viennese School, but I really don’t get the whole 12-tone thing.

Speaking of John Cage, you could always do 4:33 [a piece consisting of silence] for an encore. Then you could rest your hands at the same time.

Do you have an image of yourself 10 years from now and who you would like to be? Have you thought about having children? I know that’s a difficult decision.

I think it’s a much harder choice for a woman than a man. I know my mom wants a kid. But I am such a kid myself right now, I can’t take care of another kid.