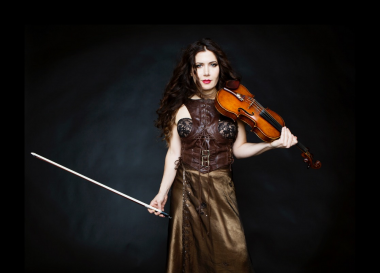 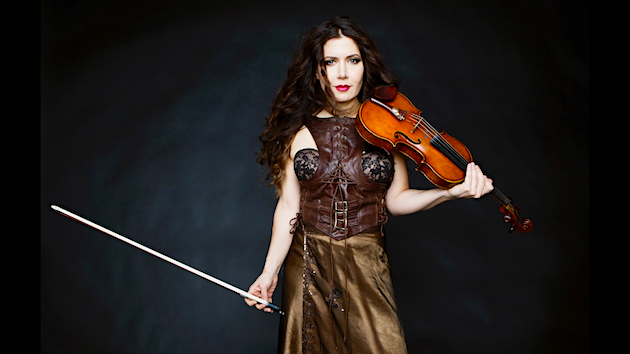 Having graduated from Brown University in 1992 with a degree in Political Science, Grammy-winning singer-songwriter, composer, and violinist Lili Haydn still has activism in her bones. Indeed, the fearless musician, once dubbed the “Jimi Hendrix of the violin” by funkmaster George Clinton, has released a new track, “Sayonara,” as a way to, well, exorcize the demons of the last four years while embracing love and transformation.

A cut from her forthcoming solo album, More Love, which drops in the spring from Lakeshore Records and was produced by Haydn, the song begins with a near elegiac cry, “Enough is enough ...” with the musician accompanying herself on violin. The track is, well, pure Haydn — rhythmic, adrenaline-charged, and mesmerizing. An 11-minute version of “Sayonara,” accompanied by a time-lapse video featuring painter Norton Wisdom, Haydn’s collaborator of two decades, can also be seen on YouTube. As for the other tracks, including “Devil You Know” and “Circle of My Heart,” they’re all part of a concept that might best be described as cathartic in that the album addresses the challenges of 2020 while simultaneously honoring the miracle of life.

And what a life she’s had: Taking up the violin at age 7, Toronto-born Haydn, who was raised by a single mother — the late comedian, author and performance artist Lotus Weinstock (1943–1997), who was also the first female comic to perform at The Comedy Store — worked as an actress to pay for her lessons and education. Fast forward to the early ’90s when Haydn began gigging with bands, which eventually led her to performing with legendary artists such as Herbie Hancock, Roger Waters, and Nusrat Fateh Ali Khan, to name a few.

Having recorded six highly lauded albums, with NPR calling her sound, “A mix of neo-psychedelic flower child and rock star virtuoso,” Haydn has performed on major stages that include Carnegie Hall, Walt Disney Concert Hall, and the Vienna State Opera. Working under the name Opium Moon, the violinist collaborated with master musicians Hamid Saeidi on santoor (Persian hammered dulcimer), MB Gordy on ancient percussion, and Itai Disraeli, Haydn’s husband, on fretless bass. The quartet that snagged a Grammy for best New Age Album in 2019 for its self-titled debut and who last performed live at a TEDxGateway in India in March of last year, has a new recording, Day and Night, due to be released in the spring, with an EP coming out in February.

Adding to those myriad accomplishments, Haydn is also a composer with some 15 feature films to her credit, including Anita: Speaking Truth to Power (2013), a documentary about Anita Hill directed by Academy Award winner Freida Mock. I spoke with Haydn by telephone from her home in Los Angeles about her music, her enduring activism, and creating art in the time of COVID-19.

What was the genesis of More Love, your first solo album since Lililand in 2014? 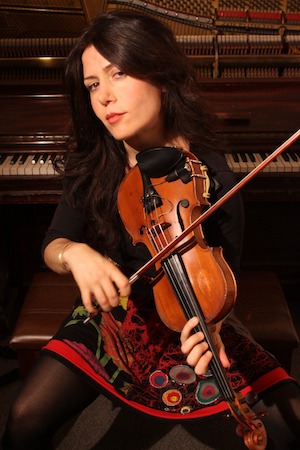 I’ve got three film-scoring projects coming out at the same time — Strip Down, Rise Up, Ruth: Justice Ginsberg in Her Own Words. and Ginny & Georgia, so with the confluence of these things, I’d been collecting music written for no particular reason — what I call my soul songs. I thought it was a good time to connect my identity as a recording artist with the identity of film composer. Also, on a philosophical and spiritual level, things have reached such a pinnacle of desperation on so many levels, it’s my heartfelt conviction that there’s no problem for which love and understanding is not the answer.

I had COVID-19 in June, and there were a few nights where I couldn’t breathe. I was scared and got a taste of what people were dealing with — how it takes hold in a body. There’s a simplicity to the lyrics of [the title song] “More Love,” that I don’t usually allow myself to go there, but when you feel like you can’t breathe, then life is a miracle — it becomes poignant, multifaceted.

When Trump got elected, I stopped feeling like words mattered. I got very depressed and rather than speaking about there being peace in the world — inclusion, reconciliation, and compassion — that’s when I created Opium Moon with Itai rather than speaking about it. I needed space because I felt like I’d said everything I had to say, so I turned my attention to Opium Moon and scoring projects. 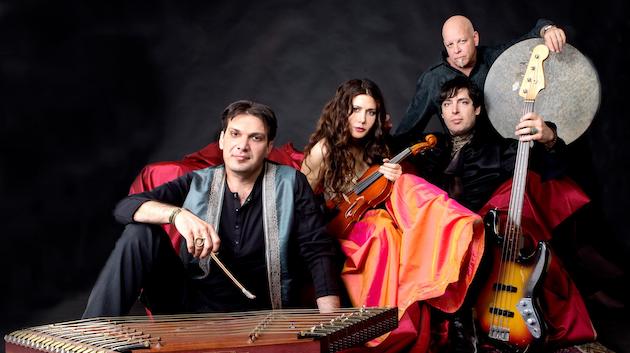 I didn’t feel there was any room for it until now. The skies opened and I started the album with “Sayonara” — goodbye to the drama, sayonara to the dogma, to the carnage. It’s always a good time to be speaking out against a war, and I felt particularly celebratory and wanted [the song] to come out before [Biden’s] inauguration. I also feel like now that we have a new administration and one that is susceptible to being guided, this is the time when real political engagement has to begin. A lot of people feel we can finally relax, but I feel the opposite.

Indeed! But what first attracted you to the violin? Who were some of your influences and what led you to incorporating vocals?

When I was 7, I had a dream I could play violin. My mom honored it, found me a teacher, and wrote a song for me in G major. I had a sense of playing music right away without knowing how to play. I always had a good ear and mom was helping to make it work. I love [composer/harmonica player] Toots Thielemans, Isaac Stern, and in terms of living violinists, Janine Jansen, David Balakrishnan, and Darol Anger [the latter two] of the Turtle Island Quartet. David taught me the scales that flip the switch for me and is probably the person who gave me the greatest gift.

Richard Greene is a violinist who invented a bowing technique — the chop — that’s super rhythmic in terms of phrasing, and when I heard [the album] The Brasil Project with Toots, I listened to it on constant replay. Hearing him glide and cascade through passages in an impetuous way, it felt like outbursts of tears and was exactly what I wanted to do. [Regarding] my voice, the violin and the voice are two heads of the same monster. I think of the voice as the fifth string of the violin and I was influenced by Eva Cassidy, Sinéad O’Connor, and castrati.

But you were actually raised playing classical music? 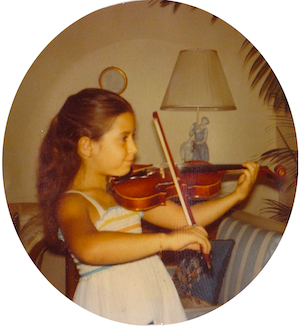 Yes. I didn’t like rock and I came to jazz because my band was brought to the Montreux Jazz Festival out of school. It was amazing, and because I have perfect pitch, I was able to jam with people. My mom gave me the sense of fearlessness that I had a right to be onstage with those people. Had I not been so foolishly unaware of how inadequate I was, I wouldn’t have learned how to play with people like Stéphane Grappelli, Chaka Khan, B. B. King, Joe Sample — and I realized I knew nothing. I was 21.

I went right from there to Stanford Jazz Workshop, where I met the Turtle Island Quartet and learned that not all jazz turned me on, but some jazz was like a firecracker inside my brain — it connected me to ethnic music, when you get into more modal jazz. It has a lot of the same scales as Indian ragas. I always loved world music, and those scales are some of the same scales you hear in classical music — Bartók, Shostakovich, even Bach in a way. Some of those scales — the ascending melodic minor — you find it in a lot of different cultures — Asian, jazz, and you also hear it in classical. It connected me, and I’ve never been bound by genre. It was always “what does the moment want to be?” In a way, that’s like scoring life, and was the perfect evolution of my muse to scoring films.

In this particularly fraught moment, with COVID-19 still raging, what do we expect art to do, and does the artist have an obligation to do it?

As with everything it contains its own opposite. The atom can be a source of all life and also destruction. Art is similarly multifaceted, and for some it’s just a way to survive and to connect to something larger than oneself. It’s a way of expressing your emotion in a way that’s not just a big kvetch. My mom used to say, “It’s only fair to talk about your life if you make it entertaining.” I’ll quote her again: “I used to want to change the world, now I just want to leave the room with some dignity.”

I don’t judge anyone for just getting by — if this moment has taught us anything, we all need to pay attention to the breath. It can be taken away at any moment. It should be cherished and that is the source of all mindfulness — noticing your breath. This has been a great cosmic time-out. And I have one more Lotus quote: “No one gets arrested who doesn’t need a rest.” 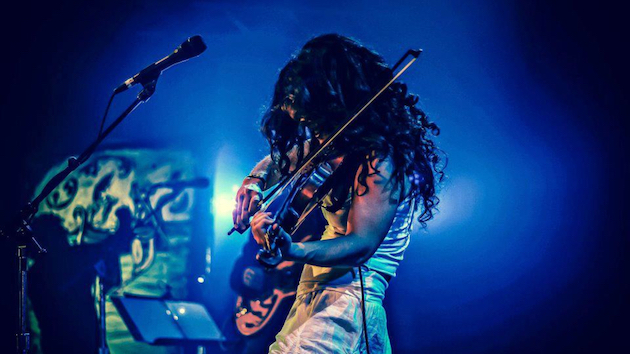 Art [is] medicine on a microcosmic level and on a macrocosmic level. It’s a way to connect that’s bigger than ourselves. After every plague there’s been a renaissance. I think artists are fertile ground for regeneration on every level. As a society, who do we want to become, what’s the next thing, what’s going to connect us all? Are we going to just party with so many of us touched by death, or, at least having our identity and social networks taken away from us?

Who are we without our accoutrements? That’s really what life is about. We accumulate identity and things and talents and skills and then as we hit a certain age, people that we love fall away from us. One’s health might fail, who you thought you were suddenly changes. It’s like an acceleration chamber for the karmic process that refines us into the essence of who we are. I’m excited to see what people come out with. For some, it’ll be baby talk, that’s okay. For some it will be more profound, and I’m excited to hear it. For me, it’s reductive: “More love, more light, darkness doesn’t stand a chance against us.” That’s the chorus of the title song.

The violinist and composer made her name with powerhouse pop and hip-hop covers and playing with Beyoncé, but she has Beethoven on her mind, too.

With a new album out and lots of irons in the fire, the jazz violinist has plenty to talk about.