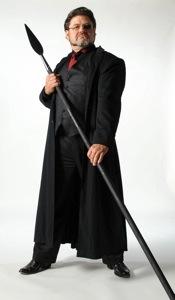 Richard Paul Fink on Legend of the Ring

Over the last decade, baritone Richard Paul Fink has become closely associated with the role of Alberich, the malevolent dwarf in Wagner’s Der Ring des Nibelungen. He’s sung the role in San Francisco, in New York, and, most recently, in three complete Ring cycles at Los Angeles Opera. Now Fink comes to Berkeley Opera to take on a different Ring role, as Wotan in Legend of the Ring. Scheduled for performances July 31-Aug. 8 at the El Cerrito Performing Arts Theater, David Seaman’s adaptation, conducted by Jonathan Khuner and directed by Mark Streshinsky, condenses Wagner’s entire 17-hour masterpiece into three hours. Fink, a former participant in San Francisco’s Merola young artist program, grew up in Masslin, Ohio; since 1984, he’s lived in Houston with his wife and three daughters. He spoke with SFCV about how he’s preparing to “step up” from chief Nibelung to the king of the gods.

You made a memorable impression as Alberich in the San Francisco Opera’s Rheingold. Now you’re returning as Wotan in Legend of the Ring at Berkeley Opera.

This marks your first foray into the role of Wotan. How are you feeling about it?

I’ve gotten several reviews and comments saying, “We’d love to hear you sing Wotan.” The problem is that you can’t always perform the roles you want unless somebody hires you to do them. This is a shorter version, and anytime you’re doing an edited version like this, there are always sections I’d rather have, or a certain line I’ve heard Wotan sing. On the other hand, Seaman was trying to make a stand-alone work, and I think he’s done a good job of it.

What does his version include, and what does it not include?

Every Wotan wants more of Wotan’s “Farewell to Brunnhilde.” There’s always — always — never enough of that. At the end of Rheingold, there’s a wonderful passage I really wish was there. A lot of the other characters are gone. But things get left on the cutting room floor. It’s a fine line, and a constant battle to keep the recognizable tunes and advance the story line.

How are you preparing for the role?

I’ve taken a couple of recordings, mostly the old [Georg] Solti recording, and edited it down myself, so I have a through-sense of what’s going on rather than just trying to learn my line. There’s a lot of skipping around, and it’s our job to keep the continuity. We’re singing actors, and I believe that’s what should come first.

Does having three daughters help prepare you for Wotan?

I’ve got a portion of it. I’ve got the Rhinemaidens and the Norns here [laughs]. There is something about that, every time I play a father of a daughter. Rigoletto is probably my favorite role: being the father of a daughter, and trying to protect her. Wotan has such love, but also disappointment, in Brunnhilde — you kind of wonder if there’s a life-lesson there. Was it too much for her to handle? Should he have handled some of it himself? I’ll tell you, the thing about doing Wotan after so many Alberichs is that you look at the character differently. I remember a colleague saying, “Alberich’s the villain, and Wotan’s the hero.” And I said, “I don’t know about that.” Calling Wotan a lily-white hero — well, I don’t see it. When I was in Merola, they brought in Sir Geraint Evans to talk with us. He was a legendary Figaro. Someone asked him if he’d ever gotten burned out on the role. He said that he was asked to do one more Figaro, and he said no. He got the contract back, and they had crossed out “Figaro” and written in “the Count.” He started to say no, then thought, “Well, that would be interesting.” It gives you a whole different perspective, and when you go back to the first role — like I’ll be singing Alberich at the Met [Metropolitan Opera] this fall, and in Venice in the spring — you have a completely different understanding of it.

Is Legend of the Ring a good way to come into the role of Wotan?

We’ll see. The Europeans are not quite as height-oriented. Americans tend to see Wotan as a big, tall guy. I don’t have those extra few inches. But it’s nice to show that, yes, I can sing some things lyrically. There are characterizations in the Wotan role that I’ve been wanting to bring to it. Sure, he’s the king of the gods, but there’s that human side that I really want to bring out.

How did you get your start in opera?

I started doing community theater when I was about 10 years old. In high school, I got into choral music. The choir director took us from Masslin up to the Cleveland Public Auditorium to hear the Met on tour doing La Traviata, and there I heard Robert Merrill sing Germont. I swear, a voice in the back of my head said, “This is what you will do.” I went a year and a half to a branch of Kent State [University], and a year and a half to Oberlin [College]. Then I basically gave up on academia. I did a stint with the Kennelly Players, performing with John Raitt and Gordon MacRae, and found out I could play mature roles by just putting on a little makeup. The problem was I had a baby face and a bass voice. But the opera people didn’t seem to mind: Colline was my first operatic role, and then Sarastro. I went for the big guns right off the bat.

So your career has included Italian and German repertoire from the beginning?

Yes. It’s the drama. I love the drama, and the story, the big Puccini melodies. In the apprentice programs, everybody wants you to do the Rossini roles. I was always coming at it a little more heavy-handed than my fellow students. People kept telling me I needed to lighten up, and I’d say, “This is light for me.” With the weight of my voice, I was going in a different direction. For me, it was always about the love of the story, trying to make the German more Italianate, in a way. Trying to bring the lyricism to Wagner as much as possible has helped, especially with Alberich. Characters like Alberich and Klingsor are usually so very barky, but there’s a lyricism to them that I think is wonderful to find.

Who are your great Wotans? Do you have specific role models for the role?

Jim [James] Morris, for years. It’s hard to put anybody in front of him. On the Solti recording is George London, which is a wonderful voice. But Jim was my first Wotan. Listening to all voices who are doing it today, I don’t have a specific one. The thing with Legend of the Ring is there are no through-sung recordings of it. You kind of have to make your own. Also, when I was in Los Angeles, it was difficult to study Wotan while performing Alberich. You listen to the music, and you’re listening to a different score.

I wanted to ask about the L.A. Ring. I didn’t see any comments from you concerning those well-publicized issues between the singers and director [Achim Freyer].

I wasn’t asked [laughs]. I think the hardest thing for me was working on that severely raked stage. I’ve had some back problems come from it. But I look at it as being a different acting style than what we’re used to. That’s one of the big things in the business right now. I come from an old-school acting style: Take what you’re given here, and run with it. As singing actors, we need to open our minds up a little bit more. Granted, there were times when I would have loved to not have “The Head” on, for several reasons … anytime you put something like that on your head, around your ears, it changes your perception. Even though it was made of mesh net, when you’re singing loud, you hear less of the orchestra; visually, you can lose contact with the conductor. In Gotterdammerung, there were moments when I was trying to hug Eric [Halfvarson] and the head would pop off. Or rolling around [the floor]in Rheingold, I’d have to reach up and make sure it didn’t come off and go rolling down the stage. But once Achim and I started to communicate, I started to pick up on his language of what he wanted, and he picked up on what I could deliver as an artist. He let me do a lot of what I wanted to do.