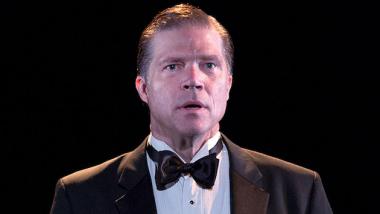 With the exception of Plácido Domingo, no other singer has maintained a longer relationship with Los Angeles Opera than baritone Rod Gilfry.

He was there the night it all started, Oct. 7, 1986. When the curtain rose (however haltingly) on the fledgling company’s production of Verdi’s Otello, Gilfry sang the role of the Herald. During that first season he also appeared in Madama Butterfly and Salome.

As the company matured, Gilfry was elevated to leading roles. He was a wily Figaro and a gregarious Papageno. He sang the role of Ford in Falstaff, Curly in Oklahoma, Riolobos in Daniel Cátan’s Florencia en el Amazonas, and he hit a high point with his memorable performance as Billy Budd.

More recently, Gilfry starred in L.A. Opera’s “Off Grand” production of Matthew Aucoin’s Crossing, and next season he will be featured in the premiere of Aucoin’s full-scale opera, Eurydice.

Gilfry has sung at the Metropolitan Opera in The Merry Widow and The Exterminating Angel. And San Francisco Opera audiences should remember him as Stanley Kowalski in the world premiere of André Previn’s A Streetcar Named Desire, and most recently as Mr. Potter in Jake Heggie’s It’s a Wonderful Life.

Of all the roles Gilfry has take on, none has offered more challenges than that of The Narrator in David Lang’s one-man opera, the loser, which LA Opera will present for two performances at the Theatre at Ace Hotel, Feb. 22 and 23.

The opera is based on the 1983 novel, Der Untergeher (The Loser) by the Austrian writer Thomas Bernhard. The story’s narrator is a bitter, one-time aspiring concert pianist who took part in a master class taught by Vladimir Horowitz at the Mozarteum in Salzburg in 1953, in which Glenn Gould also takes part. It changed the lives of the narrator and a fellow student — not for the better. The realization that Gould performed at a level they can never hope to attain nourished their appreciation of art, destroyed their spirits, and haunted them for the rest of their lives.

Lang describes the opera (and the novel) as “an epic rant,” as The Narrator examines his life, his relationship to his Salzburg roommate (Wertheimer, who has committed suicide), to Glenn Gould, to music, art, and culture. “It’s a running competition that has lasted their entire life and wrecked them.” Lang composed, directed, and wrote the libretto for the loser, which premiered in 2016 at the Brooklyn Academy of Music’s Next Wave Festival, starring Rod Gilfry.

I spoke with Gilfry from his home in Rancho Cucamonga about his role as The Narrator in the loser and what it was like working with David Lang.

How did you come to play the part of The Narrator?

He [David Lang] found me. I didn’t know who he was,” Gilfry conceded. “Then I realized he’d written The Little Match Girl Passion. He’d read the novel and had this concept of how he wanted to adapt it into an opera. I think if you read it you’d say, “how can this possibly be a great vehicle for an opera?” He said he wanted an older singer, someone who was good with modern music, was a good actor, and looked good in a tuxedo. It was Jonathan Friend at the Met that recommended me.

I got together with David to talk about it. He’d written a few bits and wanted my impression. I found it strange. I didn’t know what to do with it. It’s not lyrical. A lot of it is like recitative. The instrumental accompaniment is really sparse with lots of silence, and the tonality you do hear is not necessarily the vocal part. There was going to be a lot of pitch memorization involved. I might be singing a note that’s clearly A minor, but the chords that interject are in different keys. Eventually I started to get the feel for it, but it was very challenging.

And is there a great deal of text?

I’m looking at the score right now and the libretto is eight pages of single spaced 12-point text. I don’t know how many thousands of words that is. I never stop singing for an hour. I’m alone on stage. I kept asking David, who was also the director, what do I do? At one point, just a few days before we were opening, he said, “For the first scene [the opera’s in eight scenes] you should do nothing. Don’t move. No gestures. No expression. If there’s any expression, just smile through the whole thing.” I knew that was going to be incredibly hard. But it completely works.

You said the silences are an important part of the piece. Could you explain that?

There are so many pauses, they’re long and they’re in the middle of sentences. Should I try to lengthen the previous phrase to fill in the gap or should I cut it off like it’s written and go to another thought and then come back to it? How do I maintain the audience’s attention when I have one sentence that’s broken up into five phrases? But that’s the way the novel is written too. To be honest, I’m kind of amazed I found my way through it.

How did you approach it?

Ten years ago I ran a marathon when I turned 50. I realized running a marathon is a lot like this piece — it’s not about the finish, it’s about taking every step. You have to just keep going. When it starts to get tough, you think about getting through the next minute. You run until you get to that tree. When you get to the tree, you say I can do a bit more. That’s exactly what it’s like performing this piece. I can’t have the whole thing in my head when I begin a performance. I take one phrase at a time, and that phrase leads to the next phrase and so on. At the same time, I have to be brave enough to let the silence have its own meaning and not try to fill it. Instead of creating a gesture that clues the audience in on what I’m thinking, I have to have the strength to just stare — it’s like a stare down.

What was it like the first time you sang it? It must have felt a little like jumping off into the deep end.

A lot of the music came at the last minute. David kept saying, “I’m almost finished. I’m almost finished.” And I was doing other work. I had no time to prepare it. I was at the Edinburgh Festival singing Così fan tutte. I would get up at four in the morning and try to find some coffee and sit in this tiny room, without very good light, trying to memorize this thing. I went directly from there to New York to begin rehearsal, and we only had four days of rehearsal. It was crazy. Luckily I had David’s midi recording to work from. There are only five instruments: double bass, cello, viola, percussion, and an on-stage pianist.

I thought, at least I’ll have a conductor who can cue me. But the woman who conducted in New York thought, for some reason, I would be insulted by needing to be cued. I told her she could stop thinking like that right now! I want every single cue! That helped a lot and now I am totally confident about performing it. It’s a fascinating piece.

What kind of information do we know about The Narrator?

Nothing. His name is never mentioned. There’s nothing about his past. There’s no information at all. There’s a lot of information about the other two characters, Gould and Wertheimer, who has committed suicide. Almost everything that is said about Glenn Gould is factual. The relationship with The Narrator and the character of Werthheimer is totally fiction.

Why do you think Lang chose to direct the opera himself?

He told me that he could have let a “real” director stage it. And they might have come up with something spectacular. But he wanted it to be done exactly the way he envisioned it.

After playing second fiddle to text on Lang’s new piece, cellist Maya Beiser shines on his earlier world to come.