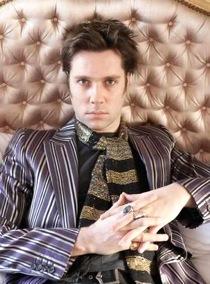 Rufus Wainwright’s high tenor voice has been celebrated in pop music and on film soundtracks for its unique hybrid of clarion strength and feline appeal, something he may have inherited from his mother, Kate McGarrigle, and her sister and performing partner Anna. The songs Wainwright writes and sings display a sometimes witty, confessional, and biographical quality manifested in the songbooks of both his father, musician-and-actor Loudon Wainwright III, and Kate McGarrigle, who divorced when their children, Rufus and Martha, were small. The younger Wainwright’s aspirations toward classical acceptance were signaled by his appearance in 2009 with his boyfriend, arts administrator Jörn Weisbrodt, bedecked as Verdi and Puccini, in the audience for the premiere of Wainwright’s opera, Prima Donna. Also last year, Wainwright began a piano setting of several of Shakespeare’s love poems. He later expanded this work to the orchestrated Five Shakespeare Sonnets, on commission from the San Francisco Symphony, with which he’ll premiere the result later this month. SFCV connected with Wainwright on tour in Australia.

What are you doing Down Under?

Doing what I do best: interviews! [Laughs] No, I’m down here with my show, from my last album, All Days Are Nights: Songs for Lulu [Decca Records], which I perform as a song cycle, for the first half. And then the second half, I come out and do my old somewhat-attempted hits.

I’ve heard that for that first half, you demand that the audience be silent.

Yeah, I do. And they’re very good at it — except in France. [Chuckling] Which I’m sure nobody’s surprised about. All in all it’s been a success. And to be honest — this is a classical music piece you’re writing, right? — what my [pop] audience might look at as bizarre or new or controlling, that’s something I have languished in and adored in the classical world, whether it’s listening to string quartets or lieder or symphonies. So it’s an experience I can bring to another audience. It’s a little more intense and all-encompassing, because I ask for no applause when I walk in and walk out. That’s more about my experience with death and my mother’s passing [on Jan. 18 of this year, from cancer]. But the actual concept of doing songs one after another without acknowledgment is something I’ve always loved about classical music.

Even though you’re often depicted as this attention hound.

Yes. Especially for this material, I have no opportunity whatsoever to lean on that attention bone that I have. I just can’t joke my way out of this one. And that’s important for this material, ’cause it’s very demanding and tragic, and I don’t want to break the mood.

Where did you get your classical training?

I went for a while to the McGill Conservatory in Montreal [near his mother’s home]. And I also had about 16 years of piano lessons, I had some amazing piano teachers, including Wanda Landowska’s companion [Denise Restout] ( I guess she would have been termed a “musical secretary” in those days, but I have a feeling they were together). So I studied piano in Wanda Landowska’s old house, in Lakeville, Connecticut. I was technically loose — or not loose, depending on how you want to look at it — and at music schools, I was more into just writing songs and hanging out with cute boys. But what did happen, and I do strongly believe that this is what I’m drawing on, is that at the age of 14, I was quite dramatically converted into what was, at that point, an opera princess. [Chuckles] It’s all because of this one recording of Verdi’s Requiem, with Leontyne Price and Jussi Björling, that, before I listened to it, I was this teenybopper, and after, I was this opera-hungry youth. And it itself became kind of a requiem for my childhood: It was my new being. And I subsequently ravished the catalogue, whether it was Verdi or Wagner or Puccini or Strauss or Berlioz, all the big opera names. I’d go to the opera three or four times a week, and spend all my money on tickets. I dove into that world wholeheartedly, and that’s where I draw most of my influence from, in terms of the sounds that I’m coming out with at the moment. Coupled with the fact that I’ve done arrangements for years for my pop albums.

Yes, yes, that was at the premiere of my opera [Prima Donna, in 2009]. Hey, it was Manchester, England; I thought I could get away with it there. [Chuckles] I wouldn’t have done that in New York, but San Francisco would have enjoyed it. On the one hand it was for fun, but on the other hand, it was a real tribute to Verdi. Because Verdi, for me, is the ultimate on many levels, whether it’s the span of his career, or the method in which he progressed, periodically punched holes in things without anybody really knowing it [Chuckles]. He is my idol. And the other thing I love about him is that he was able to somehow stay within the popular realm and also stress the envelope ... but it was still music for the masses.

For the Sonnets project, I assume it’s you that selected them.

What I’ve chosen is partly due to the fact that I can sing what I’ve written, and also, I do think they touch on the major themes. One is sleep and dreams, another is this sort of “boy” character, this very young man who also looks like a woman, which is the androgynous sonnet, number 20. Then there’s the unforsaken love, which is number 10, this spurned poet who’s heartbroken. And the Dark Lady, this enslaved sexuality. And then finally, the last one is an adieu to everything. My mother lies within that, and youth and idealism. Not a bitter farewell, but an acceptance.

Seems like you feel a kinship with how Shakespeare approached his craft.

Kinship? I wouldn’t dare say that! I’m no fool. [Chuckles] I know who’s master and who’s mistress. The thing about Shakespeare is, it’s a curse and a blessing. On the one hand, it’s such incredible material, but on the other hand, no one will ever be that great.

Let’s talk briefly about Prima Donna, your opera; where is it at right now?

We can say that there’s gonna be a major American premiere, but we can’t say exactly where yet.

Will this opera be ultimately understood by critics? Some, elsewhere, have been put off by what they see as campiness (though, in a sense, that really seems to belong with opera).

I think that, essentially, opera and criticism are not pleasant bedfellows. [Laughs] And have never been, throughout history. So I’m just following in a great tradition. There were some amazingly good criticisms, notably from France. The head of French critics adored the piece.

There go those French again.

Yeah — they’ll be there for you, and they’re blabbing the whole time. But, that being said, I got all those critics to come and to write about it, and one of the most important lessons I’ve learned in this world is, you don’t judge criticism by what they say, but by how much it weighs. [Laughs] And mine weighed a lot.

Will you stay classical?

Well, after my opera premiered, I received many offers of commissions, and I am going to take up one of them. I won’t say yet which one. But I’m gonna keep going.

If Sonnets tours, since you’ve already appeared as Verdi, would you go in Elizabethan drag?

[Chuckles] Well, I think I’d probably need a commission, in order to make one of those costumes. Verdi was very unassuming, compared with Elizabeth the First.