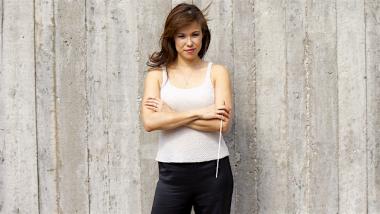 Sarah Hicks: A Conductor Ready for Anything

“So much of my career takes me all over the world,” Sarah Hicks points out, “that I wanted to live somewhere with an airport.” That somewhere is currently San Francisco, where conductor Hicks shares a residence with her husband and Pinkerton, their Papillon. Dog and husband have become accustomed to Hicks’s absences, demanded by her ongoing duties as a principal conductor of the Minnesota Orchestra and staff conductor of the Curtis Institute, where she earned her artists’ degree and taught for five years.

Born in Tokyo and raised in Hawaii, Hicks, now 45, continues to guest conduct throughout Asia, Russia, Europe, Australia, and the U.S., and has collaborated on tour with both classical and pop artists. More to the point of her recent and upcoming appearances with the San Francisco Symphony, Hicks also travels widely as a specialist in leading orchestras through film screenings; it’ll be Tim Burton’s Batman at Davies Hall on April 4 and 5, the fourth in the Symphony’s current film series, which features West Side Story this week. SFCV managed to catch Hicks at home for a chat about the evolution of her career.

Tell us a bit about your start, in Hawaii.

I came there when I was two. My mom is Japanese, my dad is American but worked as a lawyer in Japan. We only spoke Japanese at home, but they put me in a French kindergarten. They thought I was developmentally challenged in first grade, until they realized I’m multilingual.

I was a concert pianist in my youth, one of those kids who practices three hours a day and wins competitions and plays with the local symphony. I was thinking of pursuing it as a career. But in my mid-to-late teens, I developed severe tendinitis, and I was not able to play for a while. I was crying in my room, and my dad walked in and told me I should stop crying, because I could still hold a stick.

Sounds like he had a vision of your future.

Conducting is about being a consummate musician, but it’s also about leadership and organization and a certain sort of intellectual bent. All qualities that my dad saw in me.

When did you have a chance to realize his vision?

Weeks later, my high school music teacher said he had to take a phone call and asked me to come up and take over for him. It was Dvořák’s 8th Symphony, the first movement, and I conducted the whole thing.

How did it feel?

First, it felt physically very natural to me to make gestures and to try to communicate via movement. And second, it was amazing to be within the music rather than outside listening to it.

Did you have any hint of the dearth of women on the podium?

That wasn’t even on my radar. Leonard Bernstein was one of my childhood idols, this white-haired male maestro, and I never thought about how strange it might be for a girl to want to become a conductor. I didn’t think about those limitations till much later.

At Curtis, there was a very old-school conducting teacher, Otto-Werner Mueller. He accepted me at Curtis, but he told me that women are weak, and that Asians are not expressive, so it would be very difficult for me.

[Laughs] No, I was just desperate to get into Curtis, and I was so shocked to hear what he said that I didn’t have a retort. I figured that I needed to prove him wrong. Since then, I’ve been on job interviews where administrators or people on boards have asked me, do you expect your husband to move here if you get this job? And I’m, "why are you worried about my spouse?" There’s some old-fashioned thinking still going on. But I will say, with a grain of salt, that within the corps of musicians, that’s not the case at all.

Before Curtis, had you found women conductors at Harvard? You won a conducting prize there.

There was no performance program at Harvard when I was there; I was actually a composition major. I think the sheer breadth of what I did won the prize, because I was literally conducting most of the orchestras, and opera, and operetta, and musical theater. But all of my conducting activities were extracurricular.

And on top of that, you composed the AIDS Oratorio.

Yes, that was my senior thesis. I wanted to write something that was meaningful, and much larger than myself. I had a friend that was living with HIV, and that gave me the idea of creating something using poetry and prose from people with HIV/AIDS, so I solicited across the country, all of my junior year, and made a selection. It got performed twice and made me realize, I’m a pretty good composer, but I’m not a great composer.

You’ve done a lot of pops conducting, in Minneapolis, Boston, Cincinnati, and elsewhere, and I guess some might consider the film programs a pops thing. Is the pops route an easier way for women to get to the podium?

There are actually fewer women doing pops than there are women in the classical world. And my choice to go into this particular genre of music was really a personal decision. It allows me, in my mind, more interesting work, collaborating with artists in different genres, and producing my own concerts, which may be multimedia or involve nonmusical aspects. It’s much more interesting to me to be multitasking and creating something new, which I think is often lacking in the classical sector. But I’m delighted that there are more young female maestros who are up-and-coming, it’s a slow sea change which is happening, and I have no prognostication of whether it will become 50/50 in some later generation.

So it’s right and proper to think of pops as a first-tier orchestral enterprise.

I think so, when it’s done well and correctly. Historically, there have been things done where the quality was not up to par. I don’t like doing shows where there’s a big-name musician of some genre and we’re just the backup band, playing whole notes. That’s not a collaboration.

Say something about your satisfying big-name collaborations.

Smokey Robinson has had an orchestra show for years, and it’s a good one. He has good charts, he knows how to work the stage, he knows what he wants to hear, he’ll turn around and ask for more tympani — he’s great. I worked a lot with the jazz trumpeter Chris Botti, who is a protégé of Sting, and after one of our concerts, Chris said, “You’d be perfect for his tour.” [laughs] I got involved with the last third of his year-long tour. He’s a very interesting character, multifaceted and incredibly intelligent, and he was always playing his lute. His touring show, “Symphonicity,” was a reimagining of a lot of his solo hits and the Police hits. The charts were so well done and creative.

What did the orchestra add to those hits?

It gave them far more color and depth. Rock music can become monolithic, because you’re exposed to the same sonorities.

It’s a funny story: When were still living in Philadelphia, a bunch of us classical musicians got together a bunch of times to jam. I wrote some songs. It went from bluesy stuff to popsy stuff, a mishmash; it was a fun thing to do outside our usual realm of experience. Since some of those musicians had been at the Marlboro Music Festival, we named the band after a country lane in Marlboro: Cowpath 40.

And how did you get into playing for films?

I was one of the original adopters when it first became popular, maybe seven or eight years ago. I realized I had a particular skill for it, because I’m always fascinated by taking in a lot of information and trying to process it. What someone might find stressful and annoying, I find intensely pleasurable. [laughs]

How do you do it?

The score is marked in a very particular way, with numbers and symbols that indicate when certain things happen. And I need to coordinate that with my personal monitor, which has a screen with a digital countdown, a measure number, and the beats in the measure. Then I have these things called “streamers” to show if there’s a tempo change, and I often have a “click track” [electronic metronome reference] in my ear.

Does it take a certain kind of score, by certain composers?

Certainly it needs to be orchestral. I’m not so interested in doing films where the music is so episodic that it’s not terribly important. John Williams scores are wonderful, Michael Giacchino has written great stuff; a lot of the Pixar movies have wonderful scores. I just did La La Land in Minneapolis in September, and that was a wonderful contemporary score.

What about Danny Elfman’s Batman score?

Well, I love the movie, it’s dark and terrific. Danny comes up with a great theme for Batman, and he tends to take his themes and present them in different guises, different moods, with different accompaniment for different instances in the film. I like his kinetic elements; that driving rhythm is what creates excitement. And he uses the full spectrum of the orchestra.

What does your orchestra do for the audience that they wouldn’t get at a theatrical screening?

Most people who’ve seen the films before hadn’t realized there was so much music in them, and how much the audio added to the drama or pathos or romance. They find it a much more exciting experience to hear the sound coming live. It enhances the movie-watching experience.

Have you thought about how you present yourself on the podium? I know it dates me in a politically incorrect fashion, but I can’t help thinking about a song from another film, sung by Nancy Kwan in Flower Drum Song: “I Enjoy Being a Girl.”

I spent a lot of time thinking I should have short hair and wear suits and look very formal and serious. That didn’t last very long, because that’s not me. I like being tall, so I wear very high heels. I often go sleeveless, because it’s way more comfortable to conduct without anything on your shoulders. And I get a headache when I put my hair up, so I’d rather have it down, and why not, I have long hair! I do enjoy being a girl — or, more to the point, I enjoy being me.