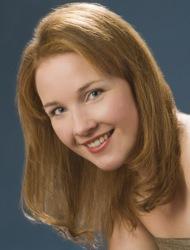 Sasha Cooke: A Francophile Soprano Who Loves to Say “Oui”

Since her years in the Metropolitan Opera’s Lindemann Young Artists’ Program, mezzo-soprano Sasha Cooke has been on the fast track to stardom. In a field already crowded with mezzos, the graduate of Rice University and the Juilliard School has distinguished herself in a wide variety of concert, opera, and recital repertoire. Although her San Francisco Opera debut is still several years away — read on for details — Cooke has made a strong impression in three previous San Francisco Symphony assignments; she returns June 23-26 to sing Les Nuits d’ete on an all-Berlioz program with Michael Tilson Thomas and the orchestra. Cooke, who was born in California and raised in College Station, Texas, is the daughter of two Russian language professors at Texas A&M; on the day we talked, she was midway through a move to Chicago, where she will make her home with her husband, baritone Kelly Markgraf.

You’ll be singing Nuits d’ete on the S.F. Symphony’s all-Berlioz program. Are you looking forward to it?

These songs are extraordinary pieces, incredibly gorgeous, and near to my heart. It’s really a singer’s dream to be able to do them with orchestra, and for me, to do them with Michael Tilson Thomas, I’m on Cloud Nine.

This cycle has a very long tradition, with many singers offering their own interpretations. Do you have a favorite?

I do like Janet Baker’s and Regine Crispin’s. I haven’t actually listened to recordings much, because I feel that there’s a lot of freedom in this repertoire. If you hear someone else’s choices, it can color your own. With these songs I didn’t actually listen to them until long after I’d learned and performed them, but I do remember liking Janet Baker’s. I watched it on YouTube.

What can you tell us about your own interpretation?

Each song is challenging, and I think the issue is that you don’t want them all to sound alike. A lot of it is something that’s hard to put into words. Just like certain smells call up certain memories, these pieces call up different sensations that come from my own personal experience. Each of them represents a different kind of journal entry, in a way: a different memory or sensory world. Others are more introverted, and there’s a sense of temperature and emotional memory — not a place as much as a kind of inner-ness.

You list Berlioz and Ravel among your favorite composers. Why is that?

I’ve always been drawn to French culture. When I was 10, I wrote a French play. I could hardly speak the language, but I figured it out. The language has always felt at home. My mom was born in France, and my aunt married a Frenchman. I have four French cousins living in Paris. There’s something about the sentimentality and the harmony — it’s hard to explain why you have certain attractions and affinities more than others, but Berlioz, Debussy, Ravel, and Massenet have always felt very natural to me. There’s something very erotic and sensual about it. They’re very feminine. I get that a lot at concerts; people say, ”You’re so maternal, so sensitive, so feminine.” Maybe that’s why.

In your last appearance with the S.F. Symphony, you were a soloist in Stravinsky’s Pulcinella.Was that a good experience?

It was heavenly. I’m crazy about Stravinsky, and I felt like I was singing with him, because MTT is so great. The singers, the space, the energy of the audience — it was amazing. Stravinsky writes the kind of music that makes you feel alive, very much in the moment. It’s constantly taking you down new paths. There’s something very spontaneous about it, which is one of the things I love about singing.

Your first San Francisco assignment was in the title role of Iolanthe. It was a wonderful performance; many Americans don’t think of Gilbert and Sullivan as serious music, but you made it sound important.

It’s brilliant. No one compares to G&S. For me it was fun because it was new territory. Comedy really is more challenging than drama, and also in the singing repertoire, there’s less of it. So it’s nice to have something where you get to laugh and be silly onstage and do a funny accent.

Yes, I would have sworn you were English.

Several people said that to me. One of my closest friends is a teacher at Juilliard, and I worked with her on the phone a lot. But I think the lyrics in Iolanthe are just brilliant — it’s the kind of music you can memorize, and it starts to mean more and more. It was a lot of fun, plus I got to come from below the stage, which was great.

Was voice your first instrument?

I played piano; I played for 15 years or so. But I never imagined that I would have a life as a musician. I didn’t know it was possible. I think it’s because I was from such a small town. Both of my parents were professors, so I assumed in some way I would also be one. I loved choir, and I only started studying voice to excel in the choir competitions. But the teachers I came across said, “You have something you should treasure.” I remember telling my teacher at Rice that I wished I could sound like everybody else. I wanted to sound like the sopranos, like the Queen of the Night. And she said, “It’s good to be different.” That really stayed with me.

At what point did you know you’d have a career as a singer?

I’ve heard other singers say it sort of just happened, and that was the case with me. It just seemed that the red carpet rolled out. When I went for my undergrad [degree], I was singing alongside graduate students the entire time. I was cast in all the operas, and I was so busy. I got into great summer programs. It always seemed like that, that I would audition for things thinking that nothing would come of it, and then I would end up getting in. That just kept happening. At Juilliard, I didn’t think I had a chance. At the Metropolitan Opera, I came in with three other people, walked across the street from Juilliard one day, and sang for them, and two months later, they said, “We want to hear you on the stage.” It’s been extremely fast, and meant to be — I don’t remember when I decided. The problem now is learning to say no.

You seem to divide your time pretty evenly between concerts, opera, and recitals. Is that balance agreeable to you?

Very. I mean, I’m happy if I’m making music in any way. Even if I were in a choral group, I’d be content. It’s funny, because I know that a lot of singers are not crazy about concert work. It’s a little more lonely, because the time spans are usually very short, and people know that you’re coming in and then leaving. You’re also sitting in front of a symphony, looking out. You hardly get to look at other people’s faces. I kind of think of concert work as I do opera — I try to feel it as a character would, and have a sense of the narrative or story. It has to be that way for me.

One opera you made a very big splash in was Doctor Atomic at the Met, singing the role of Kitty Oppenheimer. What was that experience like?

It was surreal. It was very challenging to bring history to life. There’s something daunting about the fact that people knew the woman you’re portraying, and also that you’re in the hands of a librettist and composer who had their own vision of who that character was. The production was challenging — I think at one point I was carrying a child for 20 minutes while singing. But John Adams, the Metropolitan orchestra — it was just surreal. And the cast was amazing. Every night Gerry Finley [who sang the role of Robert Oppenheimer] would come and knock on my door and say, “How are you, love? How are you doing?” He’s a dream to work with. It felt like we were doing something real, and for the right reasons. It wasn’t about histrionics and Big Diva singing.

What roles are you preparing now?

I’m working on Carmen and Melisande. They’re both one right after another. I’m covering Melisande at the Met next year. And I’ll be at San Francisco Opera in 2013, in a premiere. It will be a piece by Mark Adamo, called The Gospel of Mary Magdalene. I’ll be singing the role of Mary Magdalene! I’m so excited. I’m lucky, because I think Mark has just finished the first draft, and I get to actually talk with him about what fits well in my voice.

Your husband is a baritone. What are the rewards and challenges of a two-singer household?

The most immediate reward is simple — that he and I can travel together, and we can make music together. It’s kind of a strange feeling to make music with the person you’re in love with; it’s a little scary, actually. The nice thing is that we both understand what it’s like. We know how to take care of each other. He takes care of me better than I take care of me — reminding me to eat, to get off the phone so we can sleep. The challenge, as with any artist, is that there are lots of ups and downs. You have to keep that in perspective, not take it personally. People give us advice, and one thing they’ve said is “Make sure you’re not apart for more than three weeks.” It’s sort of our rule.

What do you do in your downtime?

I love yoga and biking and running. I like to read — right now I’m reading The Artist’s Way, by Julia Cameron. When I’m home, I love making soup. But usually I’m learning new music. Practicing is probably my biggest hobby. I feel most at home when I’m next to a piano.