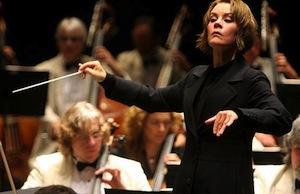 Susanna Mälkki’s upcoming debut with the San Francisco Symphony is just one in an increasing number of debuts for this Finnish conductor, including a recent turn as the first woman to conduct at La Scala. But Mälkki’s increasing renown hasn’t come because she’s a woman, or even Finnish. It’s because of her (as she herself puts it) adventurous approach to both the music and the programs. Although she’s become known, to some extent, for her work with contemporary music and is the music director of the Ensemble InterContemporain, she’s equally at home with traditional symphonic works, chamber orchestras, and opera.

Is this your first visit to San Francisco?

I was there for one day for a wedding last summer. I’m arriving a bit earlier this time, so I can see more. I’m really looking forward to working with this great symphony.

And congratulations on receiving the Pro Finlandia Medal of the Order of the Lion of Finland.

Thank you. It was a surprise. It’s very, very important, a great honor. I thought that maybe, if I did ever receive it, it would be when I was much older.

Your upcoming program is a mix of familiar and less-well-known. You’re also becoming known for thoughtful but unusual programs. How do you put programs together, and what was the impetus for this program?

It’s a little different from my usual adventurousness. It’s very mixed. I usually look for one guideline, but it may be difficult with this.

Contemporary music pieces are usually ghettoed in festivals, and the general public doesn’t necessarily have a chance to hear them. It’s good to mix them up with so-called “normal” works. I always try to do even just one piece. People tend to take a purely intellectual viewpoint with contemporary music. But it’s still played with the same quality. It’s music. You hear it with your ears.

[Gérard] Grisey’s piece has extraordinary beauty. The colors are unusual and even weird. It’s very poetic. Hammond [not on the S.F. Symphony program], also, is one of the most inspirational composers of the 20th century.

Then, to put it together in such a short time! There are, as in all concerts, an endless amount of details to polish. It’s challenging.

There are also cowbells!

There seem to be a number of conductors coming out of Finland. Why do you think that is?

This is a question that often comes up. I think it comes from a mixture. Firstly, the Sibelius Academy has a fantastic education. There’s a conductor degree. You work with Jorma Panula. There’s a wonderful collegial approach, not maestrolike. The older ones help the youngsters.

Plus, we’re a practical-minded people.

You began as a cellist; why did you turn to conducting?

I think polyphonically. I like finding stuff in the logic of the piece. The cello, for me, was an instrument. I never thought of it in a wider sense, of becoming the best cellist. When I tried conducting, it was “Now I can do what I always want.”

How have things been going?

Young conductors have no idea what’s involved. It’s very complex. There’s music making, but also the human factor. It’s 360 degrees all the time. You grow with it. All jobs with big responsibilities are challenging. It’s not necessarily visible. Performing is just the tip of the iceberg. There’s preparation, organizing, managing. But the music making is the most important.

As a guest conductor, I travel and learn the group dynamics in each group. It’s very useful, having been in an orchestra. I know from the inside what the dynamics can be. But every orchestra is more than the sum of its parts. It’s so much about psychology. People talk about chemistry, but it’s not just that. It’s professionalism, ambitions, habits, and attitudes. Sometimes you feel the spirit of a long-time leader after he’s gone. You have to have trust, love for the music, and understand the stars and the others. It’s very interesting.

I started violin before I was 5. I switched to cello when I was 9.

Performing is just the tip of the iceberg. There’s preparation, organizing, managing.

Why did you start?

I have two brothers and we all played as kids. My father sang in the choir and my mother took lessons. But it was the normal childhood music lessons, not like being a high-level child prodigy. I wasn’t sure I wanted to be a musician until quite late.

What would you have done otherwise?

I would have probably gone to university, studied something like etymology, philosophy, psychology. As I child I wanted to be a teacher. I liked general knowledge. In that sense, conducting is a dream job, as you see multiple sides of a profession. And, of course, there’s work for more than one lifetime.

You obviously have minimal free time, but what do you do when not involved in your career?

The concept of free time … in a way, everything in life is related to my career. It’s general knowledge I can use, like if I discover something when I am reading a novel. I try to take care of myself. Traveling is hard. I work on resting, on my general well-being. No one wants to work with tired, grumpy people. I love cooking. I love eating out, but it’s such a nice thing to be home and to cook. I need that.

Time spent in rehearsals is extremely concentrated. Everybody is having a pretty stressful life. The brain needs rest, like you need rest after you run a marathon. But I’m so happy to have this kind of opportunity in my life.

What are you listening to?

Lots of things, and nothing. When I’m rehearsing or conducting, it takes time for the music to fade away. I need the time away from music. But I listen to things I wouldn’t do, like singers. I often just listen to some pop music and rock and roll.