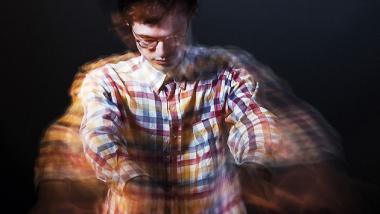 Timo Andres Is on the Prowl

Consider the recent sonic platform of Palo Alto-native, composer/pianist Timo Andres: A weather “bomb” in early January blanketed New York City and surrounding boroughs with snow. Making his way home to his apartment in Brooklyn with echoes in his ear after playing a gig that featured American roots music and an Irish fiddle-and-pipes duo delivering a graphic score by Earle Brown, it was oddly, beautifully quiet.

“The snow was a muffler,” says Andres. “The idea of creating acoustical space is something I think about when I’m writing and playing. You can create the illusion of physical space — wide open outdoors, a little living room, a vast cathedral—you can make space acoustically.”

The 32-year-old composer will be busy “making space acoustically” in the Bay Area in the coming weeks, including a performance with the L.A. Dance Project (Jan. 23) and a solo slot (Jan. 26) in San Francisco Performances’ PIVOT: New Adventures in the Performing Arts series. In February he joins Kronos Quartet in a celebration of Phillip Glass at Herbst Theater. Later that month he’ll drop in at Zellerbach Hall, where the Saint Paul Chamber Orchestra will  perform his Pulitzer-nominated The Blind Banister for Cal Performances.

Selected by Glass to receive the City of Toronto Glenn Gould Protégé Prize, carrying in his portfolio commissions for the Takács Quartet, New World Symphony, Orpheus Chamber Orchestra, and the Los Angeles Chamber Orchestra, among others, Andres’s music is here, there, and everywhere.

He describes his career as progressive; stepping stones leading from solo compositions to works for chamber ensembles to, he hopes, large-scale works he’d like to create for 100-musician orchestras. Given larger forces and a broader canvas, Andres is eager for the next challenge.

For the immediate moment, newness comes in smaller packages. “I’ve done very little work with dance,” he says, about playing Glass’s Mad Rush with Artistic Director Benjamin Millepied’s L.A. Dance Project for PIVOT. “My license as a contributor is more conscripted: I have a video. I’m taking my tempos from that.”

Even so, his conviction that minimalist scores are often misinterpreted and played too clean, without conveying a composer’s emotional intent, has him on the prowl. “What can I do as an interpreter? There’s an element of any artistic creation that’s reaction. It’s about saying, no, I know how this should go. You need to have a certain amount of ego in order to turn your back on something. Even in the most nonrevolutionary music, like [Leoš] Janáček — intimate, writ-small music — there’s an element of ego.”

Asked about opportunities like PIVOT, a series launched in 2016 to drive innovation and expand creative exchange between artists and audiences, Andres speaks of future generations. “Who would I hand the Glenn Gould Protégé award to, if I ever had the chance? When I’m put in the position of gatekeeper or curator or given the responsibility of those roles, I think about what I want the future of my profession to sound like. Do I want it to be white kids from Yale, like me?” he asks, searching for an answer. “I take it seriously: I think, how can I, someone with privilege, give it to someone who wouldn’t otherwise have the advantages I have had? I don’t want it to be someone like me: I want it to look more like America. I want it to be reflective of that, to encompass the variety and diversity of experience that is so peculiarly American.”

Later, Andres adds that his race and gender formed a clearer path to his becoming a composer. “When you’re a kid studying an instrument, all the composers are likely to be white males. Even if it doesn’t discourage [students other than white males], it sends a kind of quiet message. OK, you can be a performer, play in an orchestra, sing opera, but you can’t be part of this select club of people who write the instructions. That’s the question in everything: why aren’t there more female composers, chefs, airplane pilots? It goes back to that subliminal message.”

More support for young composers and greater gender, ethnic, and racial diversity in school faculty, he says, must continue to improve. “Even if you see just one person to identify with, it can help you to feel welcome.”

CORRECTION: As originally published, the article suggested that Timo Andres performed the graphic score by Earle Brown mentioned in the first paragraph. It was the fiddle-and-pipes duo on the same bill.

A series devoted to new repertoire and performer-audience interaction.