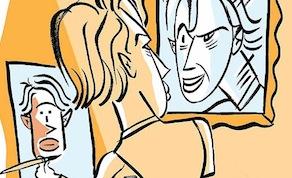 Audiences at the Mark Morris Dance Group performances of Purcell’s Dido and Aeneas for Cal Performances earlier this month may have noticed something new in their programs: Included on page 5 was a small black-and-white caricature of conductor-choreographer Morris. Readers of The New Yorker magazine likely recognized its distinctive style, for it was the work of Tom Bachtell, whose drawings have illustrated the magazine’s “Talk of the Town” section for over 20 years. At the invitation of Cal Performances Director Matías Tarnopolsky, Bachtell recently agreed to provide drawings of various artists for Cal Performances programs throughout the season. Bachtell, who trained at the Cleveland Institute of Music, is also a pianist; he spoke to SFCV last week by phone from his home in Chicago.

I always drew, but I never really had any training in it. I was always fixated, even as a child, on New Yorker cartoonists, especially older New Yorker cartoonists from the ’30s and ’40s. But I never pursued it because it didn’t seem to make sense as a legitimate career. So I pursued my other interests: I went to university and conservatory. But through it all, I just knew I loved doing it. After college, I jumped in.

How did you end up going to work for The New Yorker?

I was in the right place at the right time. As I said, even as a young kid, I was kind of obsessed with the magazine, so in my dream of dreams I wanted to be there. I was getting started in Chicago, working for the Chicago Tribune and some magazines, and I did a caricature for Tom Wolfe for Advertising Age. It was around the time he wrote Bonfire of the Vanities. The New Yorker just happened to be in transition at that time; Robert Gottlieb was still the editor, and they were making a conscious decision to start incorporating more illustrations into the magazine. Originally, it had a lot of illustrations, but then it became more gray, with mostly text. They wanted to revive some of that earlier quality, so they were looking for people. They saw that drawing I’d done, and Chris Curry, the art director, called me up and asked me to do a caricature. I couldn’t believe it, and I should say that I never anticipated, although I loved the idea of being a cartoonist, that I would become a caricaturist. I didn’t think I had a particular talent for it. But that’s what they wanted, so I had to learn how to do it. And I discovered that I did have a talent for it.

Can you clarify the terms cartoonist, caricaturist, and illustrator? What’s the difference?

I often use the terms interchangeably. The caricaturist is doing portraits of people, often trying to distill their essence or their physical traits into some kind of stylized portrait. There are specific kinds of cartoons — most people know gag cartoons — but, to me, cartooning encompasses a lot of things. It’s a kind of gestural, simplified drawing style that often involves humor and satire. In my mind, at least, it encompasses caricature. Illustration is a larger term that encompasses drawing people, illustrating other kinds of things. It doesn’t necessarily invoke things like satire.

Who was the first person you drew for The New Yorker?

Since then, who have been some of your favorite subjects?

There have been a zillion. I usually do about three people a week. I enjoyed drawing [George W.] Bush for a long time. He was actually hard to draw, because he doesn’t have a very mobile or plastic face. It was hard to find things to exaggerate about him, so I sort of landed on his eyebrows. It became kind of a game for me, week after week. Almost everyone I draw represents a new kind of challenge; I like drawing politicians for the first time, and I like drawing classic entertainers and performers. One of the reasons working with Cal Performances is so exciting for me is that I don’t as often get to draw classical musicians. When [Al] Hirschfeld drew for The New York Times, he wasn’t just drawing Broadway people. He was also drawing Rubinstein and Heifetz.

I’m guessing you don’t get to draw dead people as often, either. I just saw your drawing of Tchaikovsky, which will appear in the Cal Performances program for the Mariinsky Orchestra’s performances.

That’s right. No one’s going to call me up and chew me out for not nailing him! With Tchaikovsky, I had the combination of what photo references I could find, and this sort of image of him in my mind. There wasn’t a lot, and it was kind of hard to figure out his physiognomy just from the photograph. I had to intuit a lot.

In general, how do you know when you’ve successfully captured someone?

I’m not always sure. I tend to do a lot of different versions. Sometimes I get kind of lost in it, and I think Do I have it or not? That’s when an art director can help, and say, Yes, you’ve got it. Sometimes it’s an intuitive thing. All of a sudden the drawing is no longer just a bunch of lines. It just speaks to me; I don’t know how else to put it.

You’ve drawn many politicians. Do you consider yourself a political artist?

I’ve never really thought of myself as a political artist, but I guess you’d almost have to consider me one. I draw so many politicians, and I also do drawings that accompany political commentary. I try not to be too overt in my biases, and I try to deal with everybody in the same way. I’m not out gunning for people. I think that makes caricature weaker. You can’t forget the humanity of people. But, occasionally, even I will give in.

Who else are you looking forward to drawing for Cal Performances?

Right now I’m working on the Takács Quartet and Roz Chast. I’ll be drawing Robert Battle, who’s with Alvin Ailey [American Dance Theater], and Dianne Reeves. That’s kind of a broad variety. The Takács is kind of tricky, because it’s a larger group of people, and I have to fit all their instruments in. And [fellow cartoonist] Roz Chast will be a challenge, partly because she’s a colleague. When I draw people I’m close to, it does tend to make me a little more nervous.

I know you’re also a musician — a pianist — and that you love chamber music. How often do you perform?

I trained as a pianist and studied harpsichord. I got to the point where I was pretty good, but not where I thought I could make a living from performing. Once you get to that point, you’ve discovered the beauty of music and you realize you can’t live without it. Basically, ever since that time, I’ve done what I could to maintain my chops and my performing skills. I usually do that with chamber music. I was part of a piano trio for 10 years. Now I work with a cellist, and we do a few programs a year. We hit the retirement home circuit. But it’s great to play for people, it’s great to get programs ready, and it’s just great to be able to play. I have a standing rehearsal once a week. In fact, I just met a pianist who has two pianos and this week we’re going to be reading through the Mozart Sonata for Two Pianos. With the cellist, we’re working through the Beethoven sonatas. With the trio, we did a whole range of things, some Brahms, some Beethoven, some Turina and Dvořák.

Chamber music is so collaborative, and drawing is so solitary. Does one inform the other?

They do. I also am involved in swing dancing, and they’re actually all tied together. I think people who aren’t musicians don’t realize how athletic music-making is. In dance, people are always talking about their “core.” I think the same thing is true of music. The musical impulse comes from your core, and you have to be sort of alert and relaxed in order to play. Then again, music is all about rhythm, and in my drawing, it’s also an incredibly physical activity. I have to practice, I have to warm up, practicing lines. It’s like practicing scales. But rhythm is sort of central to me. I love discovering the rhythm in the brushstrokes and the textures and varieties I can find there. Going back to what you asked about a drawing being successful, I think that ultimately a drawing has to come to life. You can tell if you look at a drawing and it’s kind of static. It’s nice, but it doesn’t really breathe. For me, that sort of connects everything, and it’s something I keep discovering, by degrees. I’m always kind of surprised at the extent to which all these things are true.