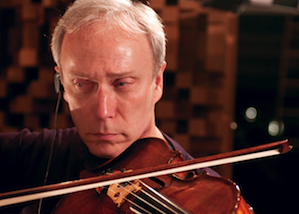 For 37 years, Hank Dutt has manned the viola chair in the Kronos Quartet, and has quietly won acclaim from both audiences and colleagues. “I think his sound is one of the greatest sounds I’ve heard from any instrument,” Kronos cofounder and violinist David Harrington told SFCV. “I find his playing, and him as a person, continually inspiring.” Harrington and cofounding cellist Walter Gray summoned Dutt to an audition in Seattle, just after the Illinois-bred violist had completed his master’s program at Indiana University, where he’d studied and performed chamber music alongside Kronos cellist-to-be Joan Jeanrenaud. During Kronos’ current 40th anniversary season, which includes this Saturday’s concert at Zellerbach Hall in Berkeley, Dutt remains one of three of the quartet’s veterans, along with Harrington and violinist John Sherba; cellist Sunny Jungin Yang joined them earlier this year. Dutt has also performed outside Kronos in solo and duo contexts. He spoke with SFCV at his home near Glen Park in San Francisco, shortly before a flight to his family home in Illinois.

So Kronos lets go of you for the holidays?

They usually give us Thanksgiving and Christmas.

Do you come from a musical family?

No, my parents are visual artists. All these [he gestures around his apartment] are my father’s sculptures. And my mother is a painter. And I just took my viola in for an adjustment to the sounding post, so I wouldn’t be able to make music while I’m home, anyway. I love my worker here — his name is Roland Feller, and he’s as honest as the day is long. He used to work on Heifetz’ violin, but his clientele also includes beginners. The sounding post helps direct the sound inside the instrument. I had an adjustment from a New York person recently, and I don’t like it; I trust Roland’s adjustments much more.

You’re about halfway through your anniversary season, which included five days at Lincoln Center and other appearances in Colombia, at Cabrillo, and here at Stern Grove. Does Kronos still feel young?

Oh, I think so. Though I don’t think so on certain days, when I’m traveling. [Chuckles] It’s harder now. But I think there is still a vibrancy in our performances. When Joan [Jeanrenaud] left the group [in 1999], I was really devastated, because I’d worked with her for 20 years, and I couldn’t imagine anyone else in that chair. My teacher at Indiana, David Dawson, was a quartet player, and his colleague Fritz Magg taught Joan, so we always had this affinity, because our styles were very much like our teachers’.

How did you feel about being recruited for Kronos?

Mr. Dawson said, “You’ll probably end up in a symphony orchestra as a principal, and get to play solos, but then you’ll probably retire to a university setting and play quartet.” And here this phone call came out of the blue to play quartet, and I was flabbergasted. It was my fourth audition.

Why did they pick you?

I was cool and very excited about music, and I loved quartets.

And you yourself have been involved in helping to pick a succession of cellists, after Joan.

You talk a lot with each other about the qualities that a person can bring to the group: the ability to play, to discuss music, phrasing, and attitude and general character. You want to have a good time at what you’re doing. Sunny has been playing with us since June, and she’s a beautiful player, gorgeous in her musicality and her thoughts about the different styles. I always felt I played so well with Joan that I knew exactly how she was going to play. And Sunny reminds me of that; it’s very easy to follow her movement, so you can place the note with her very easily.

What did you bring to Kronos?

I’ve found that in some groups, there are people who are dictators, whereas in our group it’s pretty democratic; you can say whatever you want, and even if other people don’t agree, you have to try it. In the beginning, I was more the jester, because it got so serious. I found one had to crack a joke to lighten up the mood. Also early on, we were told by our wonderful board [of directors] that we should run our organization like a business, everybody taking a portion of the jobs that needed to be done. So John did all the tapes, Joan wrote all the grants, and I did all the budgets. Then we hired Janet [Cowperthwaite], who was still in school but grew into this incredible manager, and we started turning over some of our duties to staff. But I’m still the treasurer of the organization, and also the librarian.

Being the viola voice, you hear things differently. You play a lot with the cello. And other times, you have to mirror a higher voice

And, of course, you brought your lovely viola.

Being the viola voice, you hear things differently. You play a lot with the cello. And other times, you have to mirror a higher voice, or you have to support that person, so that his phrasing works better.

Did you have an influence on repertoire?

Bob Ostertag wrote a piece for us called All the Rage [1993], and it deals with violence towards gays, and the AIDS epidemic. I lost my lover at the time; he died during the period when we were performing the piece, and I thought we should record it and have the proceeds go to an AIDS foundation, so I had a talk with David [Harrington]. It’s difficult to play, physically and emotionally. I was wanting to make a statement. [The All the Rage album was released by Nonesuch in 1993.]

Joan rejoined you last year for a recording of Vladimir Martynov’s rescoring of a Schubert Quartet, as a quintet.

We recorded [on Nonesuch] and played it here and in New York, which was very special, because Joan doesn’t like to travel [because of the challenges of multiple sclerosis]. And we had a new release a few weeks ago, a record of works by Bryce Dessner [Aheym, on Nonesuch]. We did it in a festival Bryce was curating, in Cincinnati, and the audience went wild; it’s a very strong work. “Aheym” means “homeward,” and it’s this passacaglia, a surge to the end. We’ll be playing the title track at Zellerbach [with Dessner on guitar].

I love performing, and I love being able to work on an interpretation and give it to an audience. That’s where I get my high.

Is this Saturday’s Zellerbach gig distinct within your anniversary season?

One of the great things is, we’ve brought back Black Angels [by George Crumb]. That was the piece that had given David the idea of starting the group. He heard it on the radio [in Seattle, in 1973], when he was not in a quartet, and he was very taken by it, and when he found out it was a quartet, he said, “I’ve gotta play this.” I loved it, too. It’s visceral, it’s really out there, and it’s evil versus the angels. The "God-music" section is the most gorgeous piece ever written; the sound from the glasses [also played by the quartet, as are gongs] makes it so ethereal. There’s a duet I have with the second violin, in the “Sounds of Bones and Flutes” section, which is mysterious and fun, because I get to knock my instrument.

And you’ll have some premieres at Zellerbach.

Does your viola have a special link to the pipa or other world music instruments that have collaborated with Kronos?

I think it does. The viola is still, to an extent, an untapped instrument; it isn’t hackneyed or overused. It has this contralto sound, a little warmer than the soprano violin quality. I’ve also done a piece by Pandit Ram Narayan — Indian music — where I tried to get in my ear what the sound of his sarangi is, and I tried to imitate what it could become. It was really fun, because if you played it Western-classically, it would sound kind of weird, like a concerto. You want to retain the Indian flavor, with the slides, and using the vibrato sparingly.

And you’ll be doing Terry Riley’s Another Secret eQuation at Zellerbach.

This is with choir [the Pacific Boychoir and the Young Women’s Choral Projects]. When we first worked with Terry, in the early ’80s, he invited us up to his ranch in Grass Valley. Because of his background in jazz and Indian music, we worked on pieces that use bow expression in a different way. He wanted nonvibrato, and that was something very new to Kronos, and it helped us get our group sound.

What will you be doing with Kronos between now and the 50th anniversary?

When my dad died, in 2000, I began to wonder about my mortality. You wonder where you are, and you question certain things. I think the bottom line for me is, I love performing, and I love being able to work on an interpretation and give it to an audience. That’s where I get my high. So in answer to your question, I would say: more of the same!