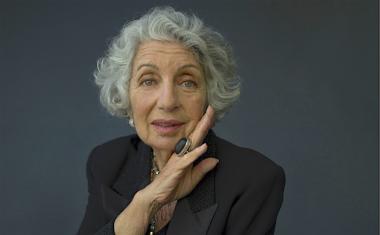 Armistead Maupin can only wish he’d created a character who grandly embodied the best of pre-digital San Francisco as vividly as Faith Winthrop. Her unexpected death on July 1 in San Francisco at the age of 87 isn’t so much the end of an era as the snuffing of an irreplaceable beacon of Bay Area bohemia, a light that kindled countless voices that continue to define and illuminate the region.

A jazz singer revered by her peers, Winthrop made her most profound mark off stage as a teacher who mentored a dazzling array of artists (as well as hundreds of singers uninterested in working professionally). At a Plush Room celebration of her 70th birthday in 2001, she was lovingly feted by former students such as future R&B star Ledisi and incisive jazz/cabaret vocalist Wesla Whitfield, ascending jazz star Paula West and activist singer/songwriter Holly Near, French jazz chanteuse Betty Roi and a cappella pioneer Rhiannon, the latter an original member of Bobby McFerrin’s Voicestra.

Reviewing the celebration for the Contra Costa Times I wrote that “the evidence on stage at the Plush Room made a persuasive case for Winthrop as a prime force in the region’s emergence as the most important vocal proving ground outside of Manhattan.” Beyond the Plush Room, her students included gay icon Divine and Bay Area jump blues queen Lavay Smith, est guru Werner Erhard and actor Keanu Reeves, Broadway star Ben Vereen, and multi-Grammy winner Al Jarreau. She founded Glide Memorial’s choir (an ensemble she led from 1970–1975) and served on the faculty of the SF Community Music Center and the SF Conservatory of Music.

It’s not just that the Bay Area would have sounded entirely different without Winthrop. Cultivating a close-knit network of former students turned close friends, she was the creative catalyst sparking the Bay Area vocal scene, the secret sauce that made the region a prime proving ground for sui generis singers. “She was like a vocal therapist,” says her daughter Erika Lenkert, the San Francisco Chronicle’s former restaurant reviewer who now runs the quarterly publication GFF: Gluten Free Forever. “You’d come in for singing lessons and leave with so much more than that. She helped people find themselves and love themselves a little more. She forged these lifelong friendships with people who took lessons with her 30 or 40 years ago.”

Born into a middle-class Jewish household in Brookline, Massachusetts, Winthrop wasn’t a likely candidate for a career in jazz. But at the age of 16, after years of studying classical voice, she heard Sarah Vaughan and was smitten. “She had that exquisite voice and she was doing all the things I was doing operatically, but she was doing them in English, with an awful lot of fun and freedom and improvisation,” Winthrop told me during an extended 2000 interview at the light-filled, Cole Valley Edwardian where she lived and taught students from 1976 – 2016.

“I found out there were two black clubs in Boston, which was very restricted and shut down at the time. So I used to go get dressed up looking as old as possible and sneak in to these black clubs where I would stalk her. I was such a fanatic fan. My repertoire changed as a result of that, then I found Billie Holiday and Ella, and the Basie band, and June Christy was another idol. I never stopped caring about operatic singing, but I certainly branched out in terms of what I was doing. It was great I had all that training, because it gave me the facility to go through my whole register without hurting my voice.”

Winthrop began performing in the early ’50s, paying dues in mob-controlled clubs on the Boston Post Road. Television hadn’t come to dominate popular culture yet, and the vaudeville ethos still guided entertainment. “You had the comedian, the singer, and the exotic, that’s what they called the stripper,” Winthrop said. “It was an amazing time that will never be recreated.”

When a reviewer covering one of her shows wrote that she belonged in one of those little clubs in San Francisco, she heartily agreed and lit out for California. By the end of the 1950s, she was the house singer at the hungry i, part of a North Beach scene that included jazz players, folk musicians, and cutting edge comedians such as Phyllis Diller, Mike Nichols, Woody Allen, Mort Sahl, and Lenny Bruce (while sharing a stage with Barbra Streisand, the Count Basie Orchestra, and Mel Tormé).

She played at top jazz clubs around the country and moved to Los Angeles after signing with MCA. Though she spent much of her time on the road, she plunged into the showbiz scene, renting Mickey Rooney’s Malibu bungalow, working with Bobby Short, and hanging out with Peter Lawford. She had relocated to New York City when the Beatles and the British Invasion swept away the old night club scene. Ever resourceful, she found work wherever she could, including a four-month stint in a club outside Fairbanks, Alaska. “I ended up traveling up from Montana and booking myself into Alaska, working every night from eight o’clock to two in the morning while living in a log cabin,” she said. “I learned to cook on a wood-burning stove, and stashed my gold sequin gown under my bed.”

A romance brought her back to San Francisco, and after the birth of her daughter, she cut way back on performing, though not from music. Teaching became her primary vocation. Lenkert remembers growing up in a house filled with students by day. At night she often joined her mother at various gigs. “I spent a lot of time sitting under pianos eating chocolate eclairs,” said Lenkert, who recalls a charmed childhood and adolescence surrounded by fascinating, larger-than-life characters, a constant flow of singers through the house, and her mother’s extravagant love of beauty.

“Our lives were set to music,” she says. “For a while we had an aviary that filled an entire room with 70 finches and Roller Canaries that I got very good at imitating. She’d plant 400 tulips in the winter and have a giant tulip party every spring. Remember, my mother raised me single-handedly as a jazz singer. She put me through school and made sure I had everything I needed. That’s dumbfounding. She didn’t come across as financially savvy, but everything worked for her. She was genuinely blessed.”

It was a blessing she generously shared. She dedicated herself to teaching jazz singing at a time when jazz education was in its infancy and vocals weren’t part of the academic picture. Madeline Eastman found her way to Faith in the early 1970s as a jazz-besotted 18-year-old looking for musical guidance. She was studying with pianist Don Haas, “and he turned me onto Faith,” says Eastman, who became one of the region’s most-respected jazz singers and pervasively influential educator via Jazz Camp West and the Stanford Jazz Workshop. “She opened up the clouds and the light shown in. It was less about technique. She opened up my eyes to the art of singing.”

Jacqui Naylor had earned a degree in marketing and never considered becoming a professional musician when she started studying with Winthrop in the early ’90s. With her guidance and encouragement, Naylor began to focus on music, eventually emerging as a highly regarded song stylist. When Naylor first connected with Winthrop her status as a vocal guru had eclipsed her reputation as a sublime musician. “It was at least a year into studying with her before I had an idea that she was so accomplished,” Naylor says. “I heard her sing, and that buttery, warm, and round sound was mind-blowing. You felt you were caressed and enveloped. Her diction was incredible, and she imparted that to us. She said, if you have these great lyrics and no one can understand what you’re saying, who cares?”

More recently Winthrop developed a course at the California Jazz Conservatory with veteran singer Laurie Antonioli, the head of the school’s jazz vocal program. Running from 2007–2014, the popular Saturday morning class was for people coming back to singing after a hiatus, or who never really pursued their passion. Even after she moved to Marin and gave up the course, Antonioli brought her back to do a series of master classes. “She did one a couple of months ago and was scheduled to do another one in a few weeks,” Antonioli says. “Students were thrilled with her. She had no decline in interest and energy. She was the kind of teacher that created a sense of strength and stability for her students.”

Always looking for interesting material, Winthrop never hesitated to explore songs more associated with cabaret than jazz. In the 1990s she started writing her own tunes, using humor to explore the process of aging (“Ginko-Biloba Blues”) and stark honesty to address topics rarely mentioned in standards. Her song, “Where Were You,” tackles the topic of single parenthood. 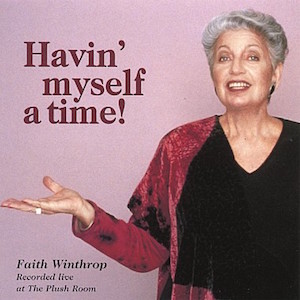 Unfortunately, Winthrop was starkly underdocumented on record. In the late ’50s she recorded an album with the great pianist Jimmy Rowles, featuring orchestrations by Buddy Bregman, best known for his work on Ella Fitzgerald’s Cole Porter, and Rodgers and Hart Songbook albums, but Epic never released the record. It wasn’t until 1993 that she released her first recording, A Leap of Faith (Silver Streak Music), a gorgeous album that captured her in all her insouciant, persuasively swinging glory. Her second CD, Having Myself a Time! evolved out of her autobiographical, one-woman show “It’s All About Faith,” which featured many of her originals.

Up until her passing, she performed twice monthly at North Beach’s Fior d’Italia. She’s survived by Erika Lenkert and her youngest student, her granddaughter Viva Wertz. Glide Memorial will host a celebration of Winthrop’s life on Sept. 15.  Details will follow on her Facebook page.