Even in America’s late autumn of discontent, the December holiday season has arrived on schedule and with it, a slew of holiday concerts. While we might not always feel up to the singalongs or caroling, this music also includes some of the great classics and most beautiful tunes we know. The variety on offer in this partial list is a testament to the creative spirit, something that, hopefully, still brings us together.

You can always count on the San Francisco Symphony for reliable holiday fare. The orchestra offers an established month-long lineup that includes classical and popular favorites, celebrity guests, and family-friendly movies accompanied by live orchestra. Here are some of the highlights:

For a full list of holiday events hosted by the San Francisco Symphony, check out the orchestra’s online calendar.

San Francisco Opera: Hansel and Gretel (Dec. 7) — There’s one performance left in the season of Engelbert Humperdinck’s opera, which has become a holiday staple.

Vallejo Choral Society: “An ‘Early’ Christmas,” (Dec. 7–8) —  That’s “early” as in the Baroque masterpiece Midnight Mass for Christmas by Marc-Antoine Charpentier. The VCS, under the direction of their artistic director, and early music specialist, Derek Tam, are adding in other Baroque beauties by Sweelinck, Porpora, and Buxtehude, as well as two guys named Bach and Handel.

American Bach Soloists: Messiah (Dec. 11–13) —  There are three performances in Grace Cathedral of this masterwork, a yearly tradition from ABS and Music Director Jeffery Thomas. That means you might still have a prayer of getting tickets. There are lots of Messiah performances to choose from at this time of year. This is the one to beat.

Voices of Music: Virtuoso Arias and Concertos (Dec. 19–22) —  Brilliant countertenor Christopher Lowery, violinist Alana Youssefian, and cellist William Skeen share the soloist honors alongside a group of possibly familiar faces from the local early music scene. In the last few days before Christmas you’ll be happy to have this concert to chase away the shopping blues.

San Francisco Bach Choir: “Journeys by Candlelight —  Christmas Near and Far” (Dec. 7–8) —  We love this concert for its candlelight procession and the beautiful renditions of famous carols, but the Choir would like you to know that they can do more than that. In addition to a musical world tour, SFBC presents a new carol by Jean Ahn, “Roasted Chestnuts,” based on a Korean folksong.

Ragazzi Boys Chorus: “Celebrations of the Season —  Stories of Our Immigrant Heritage” (Dec. 7–8) —  The top-level choir presents music from Poland, Italy, Ireland, Mexico, China, and Africa. Anytime is a good time for the message implicit in this concert. America is a melting pot and long may that continue. Caroling and a sing-along will, of course, follow.

A Chanticleer Christmas (Dec. 10–23) —  The one Christmas concert to rule them all. This men’s chorus is one of the best and their Christmas program is a tried and true favorite, featuring music from throughout their very expansive repertory. If you haven’t caught up with this group, they’re helpfully scheduling 12 performances around the Bay Area this year.

Grace Cathedral Choir of Men and Boys: “A Cathedral Christmas” (Dec. 14–20) —  Grace Cathedral is a wonderful place to hear a holiday choral concert, no argument there. Lots of performances, but don’t wait to get your tickets.

San Francisco Choral Artists: “From Pole to Pole —  Christmas in the Three Americas” (Dec. 15–21) —  Another international journey through the choral literature, this one fusing South, Central, and North American traditions, plus two commissioned works, one by Timothy Kramer (“Cradle Song”) and the other by Alexis Alrich (“Pedacitos de Cielo”).

San Francisco Girls Chorus: “A Ceremony of Carols” (Dec. 16) —  As Valerie Saint-Agathe details in SFCV’s artist spotlight, there’s a ton going on in this concert, as the chorus collaborates with Clerestory, The Living Earth Show, and harpist Bridget Kibbey. 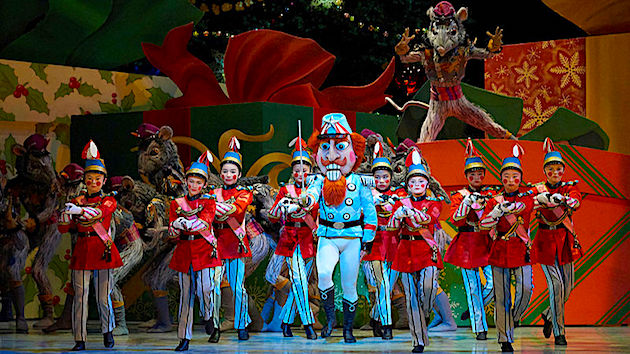 The March of the Nutcrackers and More

ODC/Dance: The Velveteen Rabbit (Dec. 5–8) — For something traditional that isn’t a Nutcracker, try ODC/Dance’s 33rd season of this production at the Yerba Buena Center for the Arts. They promise it will be “brimming with wit, festive costumes, madcap characters, and the perfect amount of holiday cheer.”

Dance-Along Nutcracker (Dec. 7–8) — It’s a three decades-old holiday tradition that started as a fundraiser. Now at the Yerba Buena Center for the Arts, this parody production takes a different approach every year. For 2019, it’s Nutcracker in Space, with intergalactic mischief aboard the Sugar Plum Falcon.

Mark Foehringer’s Nutcracker Sweets (Dec. 7–22) — Perfect for the younger set, this 50-minute production of the classic holiday ballet is danced storytelling that is affordable, magical, zany, and fun.

San Francisco Ballet: The Nutcracker (Dec. 11-29) — An evergreen thrill. With its spectacular sets, costumes, staging, and cast, the SF Ballet’s performances of Helgi Tomasson’s wonderful setting of Tchaikovsky’s classic is hard to top.

Smuin Ballet: The Christmas Ballet (Dec. 12–23) — Not Nutcracker, but still Christmas-themed, Michael Smuin’s conception allows for tradition to be updated yearly. Presented in two acts, this year’s program includes old classics such as “Ave Maria” and “Gloucestershire Wassail” in the first half, followed by “The Cool Christmas,” a contemporary collection of ballet, tap, and jazz set to pop holiday favorites.

On the Folk Side

The Freight and Salvage Coffeehouse

Voted Best Club Venue in this year’s Best of the Bay poll, Berkeley’s 440-seat Freight and Salvage has a full roster of unusual holiday treats in wide range of musical styles this month. Here’s a selection. You can view the complete roster here.

Molly’s Revenge: Winterdance (Dec. 6–22) — Celtic powerhouse trio Molly’s Revenge teams up with guest vocalist Amelia Hogan and Irish dancers for their 14th-annual Winterdance, an evening of music, song, and dance associated with the festive season. The performance will include Christmas songs both old and new, all played with a Celtic flavor. Concerts throughout California and points north.

California Revels: A Solstice Journey Through Time (Dec. 13–22) — The Revels blends traditional music, dance, ritual, and folk plays into a program presented by a large volunteer chorus of children and adults drawn from the community, along with a number of highly talented professional actors, musicians, artists, directors, and “bearers of tradition” from many cultures. This year’s theme is about history and togetherness through generations and culture. The program recalls favorite songs and dances from the totality of Christmas Revels past, using the entire range of costumes, customs, and traditions.

Faye Carol: Carolizing Christmas Concert (Dec. 8) — The Bay Area’s queen of jazz, blues, and R&B teams up with her dynamite pianist Joe Warner to groove you through the holiday season and propel you into the New Year at Oaklands Geoffrey’s Inner Circle.

Lavay Smith & Her Red Hot Skillet Lickers: Celebrate the Holidays (Dec. 19–22) — Lavay Smith and band bring a rollicking celebration of the holidays to SFJAZZ, performing timeless songs of the season with their joyous, dance-ready approach that blends swinging jump-blues and classic jazz.

Adam Shulman: A Charlie Brown Christmas (Dec. 19–22) — Best known as part of Marcus Shelby’s Jazz Orchestra and a creative force on the San Francisco jazz scene for the past decade, pianist Shulman reprises his tribute to Bay Area jazz legend Vince Guaraldi and his soundtrack to Charles Schulz’s 1965 holiday classic, A Charlie Brown Christmas. At SFJAZZ.

SFCV Editors are Michael Zwiebach, Paul Kotapish, and Peter Feher. Click on individual names for more information about each editor.

Berkeley Community Chorus and Orchestra find contrasts in works by Mozart and Haydn.

The boys chorus sings more than the typical holiday program, from English carols to the music of Mongolia and Mexico.