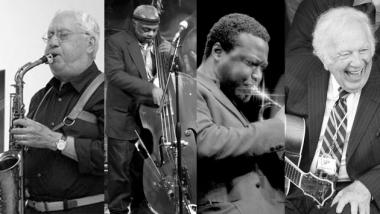 Death is part and parcel of the natural order, but in the exceedingly disordered year of 2020 the grim reaper cut a cruel path through the jazz scene, a toll that continues to mount. As a reporter I’ve spent the past 10 months accentuating the positive, searching out silver linings and documenting the resilience and unbounded creativity of musicians who continue to write, record, and perform amid cascading losses. But as the new year lurches unsteadily out of this prolonged nightmare, I want to take a few moments to think about where we are and what’s been left behind.

As we take roll call, let’s start with a slow churning rendition of “Acknowledgement,” the first movement of John Coltrane’s A Love Supreme. Great musicians leave the stage every year, but 2020 witnessed a mass exodus unlike any season in recent memory. Looking only at the most prominent players, the losses are staggering. COVID-19 took alto saxophonist Lee Konitz (92), trumpeter Wallace Roney (59), bassist Henry Grimes (84), guitarist Bucky Pizzarelli (94), and pianist Ellis Marsalis (85).

Jazz is contending with other losses that will also reverberate far and wide. The jazz scene manifests in a disorganized patchwork quilt of corporate-owned restaurants, nonprofit theaters, and independent night clubs, bars, and storefront performance spaces. However, these venues are licensed, they rarely turn a profit, and some of the music’s essential outposts are never going to reopen their pandemic-shuttered doors. The most recent blow came from Los Angeles on Dec. 31 when South Korean-born jazz vocalist Joon Lee announced that his club The Blue Whale was closing for good.

A cozy, flexible, casually stylish venue tucked away in a Little Tokyo strip mall, The Blue Whale was one of those rare artist-friendly clubs with an impact incalculably bigger than its 100-person capacity. While serving as the hub of the L.A. scene, regularly presenting the region’s most venturesome players, it was also a key spot for touring artists. Polished working bands, ad-hoc encounters, and newly minted combos could all be found on the bandstand exploring any number of jazz idioms. It was a rare night when it wasn’t the hippest jazz spot in the Southland. Someone will pick up Lee’s mantle, but it might take years to fill the niche, and there’s no way not to feel that the loss is a devastating blow.

There’s nothing quite like The Blue Whale in Northern California, but the Bay Area scene’s seams are also ripping apart. Nonprofit presenters are in the best shape, with a retinue of members and supporters who have helped cushion the shutdown’s impact. While forced to lay off numerous employees, SFJAZZ isn’t in any danger of going under, and will once again draw the eyes of the nation by producing and co-presenting the 2021 NEA Jazz Masters Tribute Concert on April 22 (a virtual broadcast honoring Terri Lyne Carrington, Tootie Heath, Henry Threadgill, and Phil Schaap).

Santa Cruz’s Kuumbwa Jazz Center and Half Moon Bay’s Bach Dancing and Dynamite Society will also pull through, though proprietor Barbara Riching is counting on a good turnout for the venue’s second annual fundraiser Feb. 21 (a virtual event featuring live streamed music, historical video, and an auction). Freight and Salvage is another nonprofit venue that’s going to weather the storm, but news that artistic director Peter Williams has decamped for Michigan, where he’s taken a position booking the Kalamazoo State Theatre, highlights other dangers.

Williams spent years booking Yoshi’s before taking the job in Berkeley, and he brought his love of jazz and Latin American music to the Freight, often presenting a far more interesting roster of jazz (and Latin) acts at the venerable folk and roots music venue than could be found concurrently at the Jack London Square club. Whether the next artistic director shares his commitment to booking jazz artists remains to be seen.

One question that’s been answered is the willingness of Bay Area music fans to support their favorite venues whatever the business model. With more than $150,000 collected so far, a GoFundMe campaign launched by Yoshi’s in November seems on track to keep the West Coast’s best known jazz club in business through the summer (though the venue’s booking policy is a shadow of its former glory when it comes to jazz).

Neighborhood music spots have also been able to turn to crowd funding to get by. The Royal Cuckoo, a Mission District joint with a Hammond B-3 organ installed behind the bar, has presented a regular lineup of swinging jazz and blues for the past decade. The husband-and-wife proprietors, Paul and Debbie Miller, initiated a GoFundMe page shortly after the initial shelter in place order, which has helped them avoid going into debt. Bird and Beckett Books and Records solicits audience support with concerts livestreamed every weekend.

While no San Francisco neighborhood has served as the center of the city’s scene in recent years, Oakland’s Uptown district has turned into the heart of Bay Area jazz world in recent years. And no area has been harder hit by the shutdown, with three venues within blocks of each other going out of business since March. The Starline Social Club was more of a rock venue but it was an invaluable gathering spot that imbued the neighborhood with creative grit.

The Uptown, a bar that regularly featured some of the Bay Area’s most expressive improvisors, is a big loss. But the spot I’m mourning most deeply is Woods Bar and Brewery, which featured jazz and related instrumental music on a small outdoor patio at the establishment’s entryway on the corner of Telegraph and 17th. The music spilled down the block, and numerous times I found myself waylaid on the sidewalk for 20–30 minutes by a horn player’s voluptuous sound.

More often than not I was on my way to or from Piedmont Piano Company, which continues to livestream performances. A few blocks away Geoffrey’s Inner Circle seems to be holding on, as is the Sound Room, the nonprofit jazz space that relocated from Uptown last year about a mile east to 3022 Broadway. A GoFundMe campaign launched to help cover the cost of the move and construction of the new space has continued, while the venue presents a half dozen or so livestreamed concerts every month.

Just about every venue owner and artistic director I’ve spoken with sounded cautiously optimistic about last month’s relief bill. The omnibus legislation included the Save Our Stages act, which makes about $15 billion relief available to independent music venues, theaters, and other cultural organizations in the form of grants or loans that venues won’t necessarily be required to repay. But there’s no such relief on the horizon for musicians. Aside from the approach of warmer weather in spring allowing for outdoor performances, jazz artists face a bleak landscape, pockmarked by precipitous income losses, canceled gigs, and the looming prospect of fewer places to play than ever. Everyone who pursues jazz as a calling knows from the outset that it’s a labor of love. COVID-19 has put that commitment to the test like no other crisis.

Discovering Jon Hendricks in This is Bop

A new book by Peter Jones traces the influential jazz vocalist’s musical odyssey, and delves into the chemistry of his most famous collaboration.

We chat with the tireless vocalist about her television special, life during lockdown, and her illustrious career.