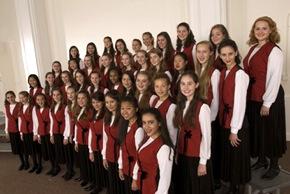 Above and Beyond: The S.F. Girls Chorus Finish the Season With Premieres

San Francisco Girls Chorus is not your average children's chorus. Well, it's not an average women's chorus either. It's a brigade of 12-to-17-year-old young ladies, 40 strong and trained in music theory and sight singing with four to six years of choral education under their belt.

“They're very well trained because they've come through our program and can read music and have good vocal technique and can sing in many languages,” said Susan McMane, the group's conductor and artistic director.

“They just want to learn more. It seems like you can't satisfy them. They want more and more challenge musically.”

McMane's concert chorus is part of a choral music education program for girls throughout the Bay Area, with students from Lodi to Petaluma and 42 cities in between. The school accepts students at age five for the preparatory chorus while students seven and up must audition for the after-school choral program before they are eligible for SFGC. According to McMane, thorough training at an early age enhances their ability to grow as musicians.

“We feel that if they love singing and they love music, then they're open to anything. They're so open to instruction and they just progress so beautifully and enjoy it,” said McMane. “They just want to learn more. It seems like you can't satisfy them. They want more and more challenge musically.”

The chorus is known not only for their dedication and award-winning performances, but also for commissioning new and challenging music by living composers. Their year-end concert, dubbed "Beyond Boundaries," features five commissioned pieces including Tania Leon's Rimas Tropicales and a repeat performance of Chen Yi's Angel Island Passages. Leon's piece contains a series of intricate cross rhythms and uses poetry by Carlos Pintado about the beauty of the evening sky. Chen Yi's composition — which features a video by filmmaker Felicia Lowe, the Cypress String Quartet, and some Cantonese phrases — depicts the experience of Chinese detainees in San Francisco.

The concert pushes the boundaries of the choral genre and crosses geographical borders. “Many of our pieces in the 'Beyond Boundaries' repertoire use complex and unique rhythms to tell a story. In the Tania Leon pieces, the rhythms are used to show sparkling stars, bouncing guitar strings, and refracting light waves,” said 15-year-old sophomore and chorus spokesperson Josephine Cormier. “Similarly, Chen Yi uses vocal rhythms that distinctly clash with the rhythm in the string part to re-create the feeling of desperation as the Chinese immigrants were ostracized by the U.S government.”

Both the Chen Yi and Leon commissions are part of SFGC's mission to champion the living art of music, adding to the group's 15-year streak of 44 commissions.

“We've gone to living composers to ask them to create new sounds for us,” said McMane. “It's part of our engagement with the living art of music and we believe the commissions add to the repertoire, the canon, of available music for us to sing and then we pass it on to the next generation so that they can sing it too.”

The concert's repertoire also gives the girls female classical figures they can look up to — past and present — from the medieval Hildegard von Bingen to the contemporary Libby Larsen. Chen Yi's journey from childhood during the Chinese Cultural Revolution of the 1960s and 1970s to 21st-century composer is inspiring, to say the least.

“There was no school during the Cultural Revolution (1966-1976) [and] Western music was prohibited,” said Chen Yi. “I had been sent to countryside to receive 're-education' in 1978 and spent about two years doing forced labor work before I became a violinist and soon the concertmaster of the orchestra of Guangzhou Peking Opera Troupe in my hometown in 1980.”

Chen Yi is just one example of what women can do in classical music and the girls learn a lot from each of the composers — yet another benefit of living composers.

“They certainly do learn a lot and it gives them a lot of courage to go after a field, if they are interested in being a composer,” said McMane. “They grow as artists and they grow as young women and see their lives ahead of them. There's lots of opportunities ahead of them for being musicians.”

Perhaps the best part is that the girls enjoy what they do and want to continue with music after they leave the chorus. Cormier, who attends Lowell High School in San Francisco, would like to join an adult chorus, wants to learn to play the banjo, and one day hopes to sing with either the San Francisco Opera or the San Francisco Symphony Chorus.

It's safe to say the SFGC is just as inspiring to the composers and Chen Yi wishes the best for the girls: “Young people are the future of our society. I always have the highest hope for them.”