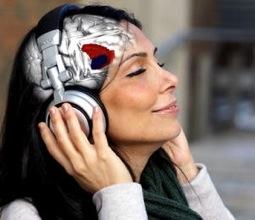 Adapted to Music, or Addicted to It?

Why do some of us love listening to sad music, while others loathe it?

David Huron has a theory. People who enjoy sorrowful music are experiencing the consoling effects of prolactin, a hormone that is usually associated with pregnancy and lactation but that the body also releases when we’re sad or weeping. People who can’t bear listening to sad music, Huron conjectures, don’t get that prolactin rush when they hear Samuel Barber’s Adagio for Strings or Chris Isaak’s Wicked Game. They just feel blue.

Those are two of the pieces that Huron, a professor at Ohio State’s School of Music and Center for Cognitive Science, is using to test his hormonal hypothesis. An expert in music cognition widely known for his research on music and emotion, he’s overseeing lab experiments that compare the prolactin levels of people who dig sad music with those who don’t. The study involves taking blood samples from subjects as they listen to sad music, to no music, and then to happy music — mostly bluegrass — to measure how much of the hormone is normally in their systems and how much, if any, is released when they hear the Barber or Brian Eno’s Apollo: Atmospheres and Soundtracks.

“What we think happens in the case of sad music is that the subcortical [brain] structures of the people hearing it respond by empathizing with the sadness, and it actually induces sadness,” said Huron, a charming chap who’s writing a book called The Science of Sad Music. He’s one of many researchers exploring the connection between music and physiology.

Huron was a hit Saturday at Stanford University’s sixth annual Music and the Brain Symposium, giving a wide-ranging lecture that included some of his current research and work covered in his most recent book, Sweet Anticipation: Music and the Psychology of Expectation. He talked about the way auditory memories encoded in our brains shape our sense of what a musical work is. And he spoke about the effects of another hormone, oxytocin, the so-called love and cuddle chemical, on memory and musical nostalgia. (Memory was the theme of this year’s symposium.)

Why a Sad Song Says So Much

The effect of prolactin, Huron said during an interview, is “a bit like Mother Nature wrapping her arms around you, consoling you, and saying, ‘There, there; it’s okay.’

“When you have a grief experience — like your dog dies — you get a prolactin release that prevents the grief from getting out of hand. Imagine if you could fool the brain into thinking your dog died, but at the end of the day, it didn’t. These subcortical structures start going into grief mode, and you get this prolactin, which is the brake on the grief. But the cognitive part of the brain says, ‘Who are you kidding? Your dog didn’t die; this is just music.’ So the cortical, conscious part of the brain is sending signals to the subcortical structure, saying, ‘Turn it off, there’s no reason to be sad.’ Now you have the prolactin release without the psychic pain. So at the end of the day, you’re actually feeling quite good.”

“We’ll find out what we find out,” Huron said. “It’s nice when your prediction comes true, but it’s not research if you don’t risk failure.”

Huron’s earlier research into the phenomenon known as musical frisson — the chills or shivers that music can send up and down your spine — was cited in Valorie Salimpoor’s hiply titled presentation at Stanford: “Sex Drugs and Rock and Roll: Involvement of the Dopamine Reinforcement Circuit During Music Listening.”

A doctoral student at McGill University and the Montreal Neurological Institute, Salimpoor coauthored a study published in the journal Nature Neuroscience in January that showed, for the first time, that chill-inducing music releases dopamine, the neurotransmitter involved in such pleasurable acts as making love and eating dinner.

Seduced by an Adagio: How Music Stimulates Us

“Music has been around forever, in every culture throughout recorded history,” Salimpoor said over lunch. “Typically, behaviors that have been around that long, such as eating and sex, are adaptive; they’re encoded for survival. They’ve been around for so long because of a dopamineric reward system. When dopamine is released, the behaviors are reinforced and we keep doing them. It’s the same basis for [drug] addiction. Music was somehow tapping into those systems.”

Salimpoor and her McGill colleagues had been studying how pleasurable music triggers “intense emotional arousal,” causing changes in pulse, heart rate, breathing, and body temperature. They were fascinated by the fact that a series of sounds could arouse physiological responses, such as chills.

“Our main question was, Is the intense emotional arousal enough to release dopamine?” said Salimpoor, whose lecture began with a blast of Jimi Hendrix’s Purple Haze and included snippets of Beethoven and even trance music. To find the answer, they rounded up 217 people who said that their favorite music made them shiver.

The test group was whittled down to eight people. They were placed in PET (postitron emission tomography) scanners while listening to the music that moves them. The researchers injected the subjects with a substance called raclopride that binds with dopamine receptors in the brain. The raclopride is “labeled” with a radioisotope whose signal can be read, telling the researcher where and how much dopamine was released. As a control, the same tests were done while the subjects listened to “neutral” music that didn’t thrill them.

“We found dopamine binding in the dorsal and ventral stratium of the brain,” said Salimpoor, referring to the parts of the stratium that deal with prediction (dorsal) and emotion (ventral). Her team also put the subjects in an fMRI to pinpoint when the dopamine was released. The participants pressed a button whenever they felt the frisson. The scans revealed that they got a surge of dopamine while anticipating the moment of ecstasy and when the big chill arrived.

“When we listen to music, we experience an intense emotional arousal that’s so pleasurable that it’s being reinforced,” said Salimpoor. “We always knew that emotion and reward centers of the brain were involved in music. This is the first evidence that dopamine is released when we listen to music. There are actual physiological changes that happen in your brain in the motivation and reward circuits that keep you coming back to music. It suggests that music is mildly addictive.”

It’s an addiction with great therapeutic and cognitive benefits. Salimpoor thinks the findings of the McGill study could be useful to patients with Parkinson’s disease, who have decreased levels of dopamine; listening to music that moves them, she said, might increase the amount of dopamine in their brains.

Nina Kraus’ research shows that people who make music — whose training involves the memorization of sounds and patterns — process music and language better than nonmusicians. Years of musical experience, she says, fundamentally changes how the nervous system responds to sound.

“Playing music enhances our ability to hear language and to hear speech in noise,” said Kraus, a neurobiologist at Northwestern University who runs the Auditory Neuroscience Laboratory there. She put up some graphics at Stanford that vividly showed the correlation between sound waves and the brain-wave responses to them. (She’d captured the brain waves with electrodes attached to her subjects’ heads.) The musicians’ responses to speech heard amid noise closely matched the speech pattern.

With the nonmusicians, “The nervous system is just not transcribing the sounds as accurately,” Kraus said. “Musicians do it better. They’re constantly mapping sound to meaning.”