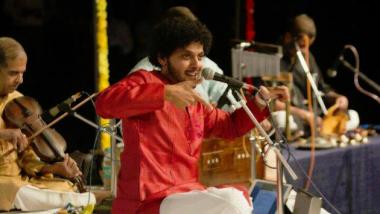 Never underestimate the power of a movie to revive a neglected musical style. Just as the French animated film The Triplets of Belleville introduced a vast new audience to the insouciant pleasures of Django-style jazz, and Oh Brother, Where Art Thou? ushered millions of urban sophisticates into the haunted soundscapes of the old, weird America, Mahesh Kale’s soaring voice has turned countless young Indians onto Natya Sangeet, a semiclassical musical theater tradition dating back the 19th century.

In 2015, the long-time Sunnyvale resident won the best playback singer award at the 63rd National Film Awards, India’s equivalent of the Oscars, for his vocal work in the epic film Katyar Kaljat Ghusli (A Dagger Through the Heart), transforming Kale from a respected classical artist into an unlikely pop star. A decided dark horse as a regional film from the western state of Maharashtra, Katyar Kaljat Ghusli beat out several lavish Bollywood productions. Though his face didn’t appear on screen, his voice made such an impact that “when I got back to India hardly any theater could contain the audience at my concerts,” says Kale, who headlines his first Bay Area performance since the NFA triumph on Saturday, Sept. 16 at the Flint Center in Cupertino.

He got word that he won the award driving home from a performance in India, and within minutes his cell phone lit up with calls from television, radio and newspaper reporters. What should have been a three-hour drive ended up taking eight hours “because I had to keep pulling over to talk,” he says. “And when I got home people were lighting firecrackers in the front of my house, and there were at least 20 cameras set up.”

Born and raised in Pune, the cultural heartland of Maharashtra, Kale was a prodigy who started performing at the age of 3. He went on to become a disciple of Pandit Jitendra Abhisheki, who spearheaded the revival of Natya Sangeet in the 1950s. In his decades-long campaign to breathe new life into the Maharathi tradition, Abhisheki composed more than a dozen musical productions, including the 1967 hit Katyar Kaljat Ghusli, which was the basis for the award-winning film of the same name. “Half of the songs are from the theatrical production,” Kale says. “And since the movie and the soundtrack were raging successes, the songs got another lease on life. People are going back and connecting to the tradition all over again.”

Part of what makes Natya Sangeet such an interesting form is that the dramatic imperative of theater allowed Abhisheki to employ a wide array of styles. Like the studio era of Hollywood, the golden age of Broadway, or Bollywood today, actors had to be triple threats, adept at singing, dancing, and acting. Built on a foundation of North Indian classical music, Natya Sangeet evolved to showcase all these skills and Abhisheki’s productions came to embrace the ecstatic Sufi vocal tradition of Qawwali, love-besotted ghazals, and light classical fare.

For his Flint Center performance, the versatile Kale will be touching on all of these styles. He’s joined by a stellar cast of classically trained musicians, including Vibhav Khandolkar on tabla, Suryakant Surve on percussion, Rajiv Tambe on harmonium, Kedar Gulavani on violin, and Prasad Joshi on pakhawaj (a North Indian version of the barrel-shaped mridangam drum that’s ubiquitous in South Indian classical music).

Now that he’s helped spark a second revival of Natya Sangeet, Kale is determined to build more bridges. In Indian classical music, where the chasm between the exalted artist and the audience can be vast, he’s started leading listeners on sing-alongs. Kale begins with the basic notes of a rag and “within five minutes people who don’t know anything start singing and building a tune,” he says. “People start tearing up. The music has been mystical, and this is giving them a way to participate directly. I can see the glitter in their eyes. I’m onto something that’s bigger than an award or a performance.”

Sounding like a true Californian, Kale just might be going native. He relocated from India in 2001 to pursue his education, and ended up earning an M.A. in multimedia engineering at UC Santa Barbara. He moved to the South Bay to get another masters (in engineering management) at the University of Santa Clara. Rather than plunging into a Silicon Valley career, he and his wife, who works at Dolby Laboratories, decided he should take a year to see if he could get traction as a professional musician.

“Music has been a part of my life all the time,” he says. “I was practicing all through graduate school. After I finished the second masters I knew if I had to take a job in Silicon Valley it would be very demanding, and I didn’t want to do music as just recreation.”

While the Bay Area boasts a large and well-educated Indian community and a five-decade history as a world-class outpost for Hindustani classical music via the Ali Akbar College of Music in Marin, Kale didn’t try to build a local following. He hit the road every year for the classical concert season in South Asia and Australia, which peaks between November and February, and spent summers performing in Europe.

For Kale, the opportunity to collaborate with Brooks has provided an ideal bridge to jazz, a singularly porous art form. “The way I look at it is if you travel to a country and want to really experience it in full, you have to interact with the people there and their culture, and discover the beauty that you don’t know,” Kale says. “That’s how I started to look at jazz. When I got here I took a few classes on jazz and then met George through a mutual friend. What makes it easy is that George has learned Indian music as well. Rather than putting it in a musical realm, I look at it as two friends who try to share the joy of music.”

Here is a video clip of Brooks and Kale performing at Berkeley's Freight & Salvage Coffeehouse:

Brooks and Kale have been collaborating for several years, with the vocalist occasionally joining the saxophonist’s Indo-jazz combo Summit. “And I’ve performed with him in his more classical settings,” Brooks says. “He’s mastered a wide array of Indian classical traditions. What’s interesting about Mahesh is that he has very few references to Western music. He’s deep in the tradition, and has become a bit of a celebrity.”

Tickets and details for the concert are available at the ICMA Foundation website or by calling  (408) 864-8816.