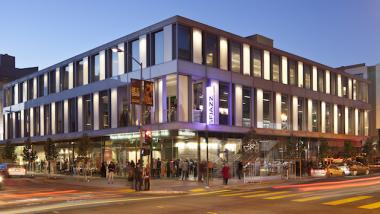 In December, I wrote an SFCV opinion piece arguing that SFJAZZ should take a bigger role in showcasing Bay Area-based jazz artists (SFJAZZ: Commissions and Omissions). The column stoked a long-simmering conversation that often flares up whenever a few Bay Area musicians gather in person or online and, not surprisingly, it ruffled some feathers in the organization.

Randall Kline, SFJAZZ’s founder and executive artistic director, called to discuss the article, making a strong case for the organization’s commitment to presenting Bay Area artists. He mentioned he’d been thinking about holding a town hall-style meeting to address the local jazz community’s questions and complaints and said that the time seemed ripe for a discussion.

It took a few months to pull together, but on March 20 about seven dozen musicians gathered in the SFJAZZ Center’s Miner Auditorium for a conversation with Kline, SFJAZZ CEO Don Derheim, and pianist Rebeca Mauleón, SFJAZZ’s director of education. “We want to hear your ideas about how we can better serve you,” read the event’s Facebook announcement, and the ensuing discussion, moderated by bassist, composer, and bandleader Marcus Shelby, was by all reports lively, occasionally contentious, and possibly productive.

I couldn’t attend, but I’ve been following the online conversations sparked by the meeting and checking in with musicians who participated. Trumpeter Darren Johnston, a creative force on the Bay Area scene for two decades, took a leading role in rallying musicians to attend the town hall, while gathering online input about what questions to ask Kline. A natural community builder, he hoped to steer the conversation away from a ritual venting of frustrations and toward building bridges between Bay Area players and SFJAZZ. He didn’t get a chance to pose all of his questions, but Kline followed up him a few days later, spending some 90 minutes on the phone talking about the organization’s role in helping support a scene that often feels under siege by the same economic forces buffeting artists of all stripes.

“The fact that the director of a multimillion-dollar arts organization would spend that much time exchanging ideas with me speaks volumes to the sincerity of wanting to interface with the local scene,” Johnston said. “I asked some hard questions, about what they can do for us. But I’m thinking about what questions I have for us too. How can we elevate the scene ourselves? How can we organize ourselves so we can interface with an organization like SFJAZZ in a mutually beneficial way?”

For many musicians, a gig at SFJAZZ can feel like validation, and a lack of response to a query adds insult to what’s perceived as an injury. Understandably, several musicians at the town hall focused on how to go about getting booked in the Center (Kline said keeping the organization posted about gigs evidencing a significant local following is much better than sending recordings or videos). Reed expert Rob Barics suggested that SFJAZZ could create a space on its website linking to gigs in local venues, while acknowledging that would often mean boosting competing events (Kline indicated he was well disposed to this idea, along with some collaboration with the presenter Jazz In the Neighborhood).

Kline also addressed the central proposal in my piece, which argued that instead of hiring Bay Area artists to play music from classic albums, like saxophonist Kasey Knudsen’s April 22 date in the Joe Henderson Lab interpreting Henderson’s influential 1964 Blue Note release In ‘n Out (which I totally plan to attend), SFJAZZ should commission Knudsen and her peers to write and present original music in the JHL. In our phone conversation he pushed back on why an idea that seems like a no-brainer is actually fairly complicated, pointing out that 1) commissioning new works hasn’t been part of the organization’s core mission, and 2) if SFJAZZ were to launch a commissioning program, he’d want it to be sustainable over the long term, which entails raising a whole lot of money.

I’m going to come back to this question of commissions, but not all the musicians I talked to focused on SFJAZZ’s role dispensing gigs or resources. For vocalist Tiffany Austin, who played four sold-out shows in the Joe Henderson Lab last month, the town hall meeting itself made it apparent that musicians need opportunities to hang.

“As a bandleader and label owner and indie artist who is doing everything, manager, booking agent, web designer, and whatnot, where I am is I want a place to have conversations and exchange information with other musicians,” she said. “What I enjoyed about the meeting was the 30 to 60 minutes hanging out afterwards. There was such good energy in the room. I was thinking, there’s Destiny Muhammad, I’ve got to hear her and go to her shows and support her. It’s easy to get tunnel vision when you’re trying to pay your bills. Everybody is just trying to live. It’s so important to have places where musicians can commune.”

It’s not hard to imagine SFJAZZ creating forums for musicians to get together at the Center a few times a year, either with a theme (promotion, web design, publishing) or purely social. No matter what the organization does, there’s a contingent of players who will always see SFJAZZ as The Man, a corporate entity that charges too much for tickets and focuses too much on mainstream players, marginalizing musicians working in territory opened up by the avant garde artists of the 1960s and ’70s. I see this as a category error, like when a certain faction of jazz fans discount Oscar Peterson because he wasn’t Cecil Taylor.

SFJAZZ offers particular modes to experience the music, and it should go without saying that jazz artists deserve the world-class production, staff, and facilities that the organization provides. The formality of the concert experience is baked into the Center’s design, and the space is not going to function as a late-night spot or an afterhours joint. That’s okay.

I want to take a step back and think a little about what a healthy jazz scene requires. The Bay Area has an enviable array of improvisers dedicated to elevating their craft into the realm of art. But a thriving music ecosystem encompasses artists and venues, supporters and patrons, critics and journalists. Of all these components, none has taken a greater hit over the past two decades than the writers, as space for reviews and profiles has largely collapsed (present company excepted, thankfully).

When I moved to the Bay Area in 1996 for graduate school at Cal, I quickly found my way to the East Bay Express, a paper that embodied all the plucky resourcefulness, smarts, and ambition of the best alt-weeklies. The freelancers contributing music reviews and features included Derk Richardson, pianist Sarah Cahill, Larry Kelp, guitarist Duck Baker, Eric K. Arnold, Gina Arnold (no relation), j poet, Lee Hildebrand, Montreal refugee Juan Rodriguez, and SFCV contributors Jeff Kaliss and Jason Victor Serinus. I was beyond proud to join their ranks, and looking at those names, I don’t think you could find a deeper roster on any general publication in the country outside The New Yorker. I digress, but not really.

SFJAZZ can’t replace all the missing pieces that make sustaining a creative scene in the Bay Area so challenging today. But it is ideally placed to facilitate an initiative that focuses on funding new works. In his introductory remarks before concerts, Kline often describes SFJAZZ’s success at expanding its membership from around 3,000 when the Center opened five years ago to more than 13,000 today. Many of those members might be interested in joining a Patreon-like platform to support the premiering of new works at the Center.

The point isn’t that a commission is going to transform a selected artist’s career, but that SFJAZZ recognizes that new music is the art form’s life blood. While San Francisco Friends of Chamber Music (now InterMusic SF) has embraced jazz composers in recent years, there’s no funder in the region that focuses on funding new jazz works. The door is wide open.

As a building designed and built as a house for jazz, the SFJAZZ Center is an unprecedented achievement. Kline knows that accomplishment comes with high expectations. “We have a community responsibility,” Kline says. “We’re having a town hall because we care. The Symphony isn’t having one. The Opera isn’t having one. ACT isn’t having one. We do take this seriously. Everything that got expressed is going to be considered.”

Kline seems ready for the conversation to continue. Musicians should be thinking hard about how to engage with SFJAZZ in the long run.

Will the leading institution step up to support composers and foster new jazz voices in the Bay Area?