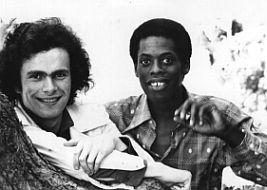 An Anniversary About Lives Changed

Janos Gereben on June 3, 2008
I had to look up the date, but the scene itself is still clear in my mind after so many years. In 1982, Calvin Simmons — about to go on stage to conduct his orchestra, the Oakland Symphony — ended an interview in the wings of the Paramount Theatre by saying, "I am here because of Madi." A few months later, at age 32, Simmons drowned in a Lake George (New York) boating accident, even as his conducting of the San Francisco Opera, the Los Angeles Philharmonic, and other major orchestras received high praise around the country. Consequences of his tragically premature death — he was the youngest and the second African-American conductor of a major orchestra — included the unraveling of the Oakland Symphony, which he had led since age 28. Simmons was among the many protégés of Madi Bacon, the music teacher and choral director who founded the San Francisco Boys Chorus in 1948. The cofounder was Gaetano Merola, also founder and the first director of the San Francisco Opera. Simmons joined SFBC at age nine, and conducted the chorus by his 11th year.

This month, the San Francisco Boys Chorus, now directed by Ian Robertson, is celebrating its 60th anniversary, which includes a gala concert at the War Memorial Opera House on June 15. As 225 youngsters from 48 Bay Area cities — and more than 115 schools in San Francisco, Oakland, and San Rafael alone — continue in the steps of Simmons, the founders' emphasis on the inclusion of the underprivileged persists, even as the group operates in some luxurious venues. With the help of a former San Francisco mayor and others, the Willie L. Brown Jr. Music Scholarship for Boys provides tuition, uniforms, and transportation to more than 25 young singers from underserved neighborhoods in San Francisco. Regardless of financial status, all the singers will participate in this summer's tour of southern France, where they will perform works by Marc-Antoine Charpentier in Marseilles, Monaco, and Aix-en-Provence, from July 8 to 18. Alumni loyalty has served the organization well over the years. For example, Harvard cardiologist Dr. Peter Libby, an alumnus from the 1960s, has provided the lead gift for the chorus' Madi Bacon Endowment Fund for Music Education Scholarships. Libby will present the first endowment award to a boy at the June 15 anniversary concert. Well-known alumni of the Boys Chorus include author Daniel Handler (aka Lemony Snicket), actor Joshua Jackson, singer Christopheren Nomura, a cappella director Deke Sharon, Fort Worth Opera Artistic Director Joe Illick, Charlotte (North Carolina) Symphony resident conductor Alan Yamamoto, Seattle Opera Chorus Director Philipp Kelsey, Ohio State University music professor Graeme Boone, and countless others.

Alumni will be represented on stage and in the program anniversary concert, with Éric Marty's C. elegans and Jeremy Faust's Parvus sum (to a text by Philip Littell), in addition to Léo Delibes' rarely performed Messe breve and Franz Schubert's youthful Mass in C Major, D. 452. Faust, with twin careers in medicine and music, remembers his SFBC days with great affection:

The Chorus was a big part of who I was as a kid. At some point I chose it over school sports and I remember that being a turning point. For me, singing complicated harmonies gave me a rush that other kids might have gotten from things like skateboarding or even getting into trouble. About the worst thing I ever did was unsuccessfully trying to make a bootleg recording of a San Francisco Opera [production] I was performing in, for my personal enjoyment. So much of what influences me now as a composer I was first exposed to in the SFBC. One of my biggest influences, even today, is Benjamin Britten, a composer who wrote expertly for both adults and children. My initial distaste for his music at the age of 11 metamorphosed into total admiration by my early teens. Nowadays, I compose professionally, and conduct choral music, mostly with the International Orange Chorale of San Francisco, which I cofounded in 2003.

Madi Bacon, originally from Chicago, was a student of Serge Koussevitsky (the great conductor of the Boston Symphony Orchestra), and first arrived on the scene here in 1946 to head the UC Berkeley Music Extension Division. She was instrumental in starting music classes for veterans and buying pianos for the university's first music studios. When Merola asked her to recruit and train boys to perform in the 1948 season’s Carmen and La Bohème at the S.F. Opera, Bacon formed what at that time was the country's only boys' opera repertory chorus. (The opera company’s influence was manifold: Consider, for example, that the San Francisco Ballet, now the country's oldest ballet company, is yet another offshoot of the S.F. Opera.) Bacon remained SFBC director until her retirement in 1972, but stayed busy for three more decades, including such vigorous physical activities as hiking in the Himalayas while in her 70s. SFBC Board Vice President Achille Paladini was a member of the original chorus, singing in the very first performances:

I was born in San Francisco near the Palace of Fine Arts, and attended Winfield Scott Elementary School when Madi Bacon came to the school to audition for the first chorus. I really did not want to be in the chorus but was urged on by a friend who was just accepted. It ended up being a wonderful experience. I remember sitting on the lap of Gaetano Merola and talking to him as if he were my grandfather — such a warm, nice man — and also talking with Herbert Adler as if he were an uncle. Everyone was so genuine and down to earth. Of course, as a 10 year old I had no idea how famous they were. They all signed their autographs with a note to me. I still have them. Madi Bacon chose only me to go out on stage for the opening scene of La Bohème; she told me, "run out to warm your hands on the fire in the center of the stage, and then just run back." She said "Do not look at the audience!" Well, of course, you tell a 10 year old not to do something and you know what happened. I looked out at the audience and saw thousands of people just looking at me, and I said "Oh shoot!", and the audience must have known what I said because they broke out in laughter. Madi asked me what happened and I said, "I guess they thought I was cute," knowing I would be in big trouble if she knew.

During its six decades of affiliation with the San Francisco Opera, Boys Chorus members have participated in 164 productions, performing in Tannhäuser, Macbeth, and The Magic Flute during the last season alone. The Chorus' concert tours include Australia, Austria, China, Czechoslovakia, England, France, Greece, Hawaii, Hungary, Hong Kong, Ireland, Israel, Italy, Japan, New Zealand, and Russia. Choristers have sung for U.S. presidents, the Pope, Queen Elizabeth II of Great Britain, and the president of the Soviet Union. Sixty years on, the San Francisco Boys Chorus continues to enrich young lives. Robertson, already in charge of the San Francisco Opera's grown-up chorus, added SFBC in 1996 because he was "fascinated by the quality of sound that boys could produce and how that could be harnessed to the expression of music written for this medium. I agreed to be interim director until they sought a new leader. It's 2008, and I'm still exploring the depths of this genre."