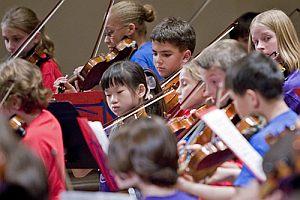 Attuning Your Kids to Music:Lessons From Anne Crowden 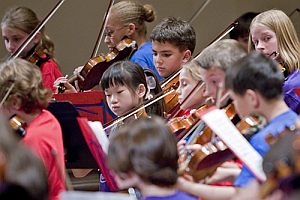 Putting kids in tune with music can be a tricky adjustment. When my piano-teacher mother was raising us, there were fewer distractions vying with the sounds of her practicing Schumann and Chopin and the classical programming of WQXR radio. Although my own eclectic tastes and busy life may be partly to blame, my children have yet to develop an abiding familiarity with classical music and affection for it. They’re beset by a legion of distractions among peers and from the media, where what poses as music is often artless and unchallenging, and they get precious little training or exposure to the classics in public school.

No wonder I felt a sense of longing when I was introduced to the supportive environment of the Crowden Music Center in Berkeley. Here were enticing descriptions of a quality curriculum based in chamber music, alongside photos of smiling elementary and middle schoolers singing and playing a variety of instruments.

Certainly Crowden wouldn’t and couldn’t be the best place for every kid, but it is a good inspiration for considering some of the questions all of us face as parents. How do you assess children’s interest in music in general, classical in particular? If they’re interested, how early should you start them out? What are the best people and places to teach them? 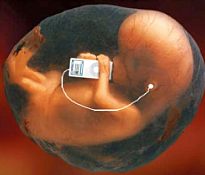 Many moms, particularly those who are practicing musicians, confirm that children begin responding to musical stimuli in utero. Once outside the womb, kids commonly begin making music as soon as they can shake a rattle, and will often begin vocalizing before they speak, whether or not they’re destined to be prodigies or virtuosi, or to enroll in a full-time program such as Crowden’s. There instruction starts in the fourth grade, but musical immersion can sta 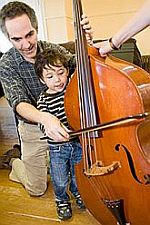 rt earlier, and many believe it should. “There’s no question that most people have some innate musicality,” notes Lisa Grodin, director of music at the Crowden School. “It’s a question of whether [children] have the opportunity to develop that [musicality].”

The Crowden School has, through its Center for Music in the Community, extended its outreach beyond the school’s five grade levels to the very young (as well as to seniors). First opened in 1983, Crowden is a successful realization of the vision and ideals of its founder, who came to the U.S. from Scotland in 1965 at the invitation of cellist Colin Hampton of the Griller Quartet. Anne Crowden (1928-2004) was “the one who started the big chamber music movement here,” particularly in the East Bay, claims Grodin, who had studied with the Scottish violinist as a 10-year-old Berkeley public school student.

“She had an uncanny sense of what each student needed to bring them out,” Grodin recalls. “She’d have kids over all the time, with Bonnie Hampton [who now teaches at Juilliard], and the two of them would play quartets with them. You get to know a lot about a person just by watching them and playing with them and seeing what makes them tick.”

Crowden’s own daughter, Deirdre, studied cello with Hampton, though her academic work at a standard school forced her to postpone musical activity until the later afternoon, when her youthful energy was ebbing. This was part of Anne’s motivation to found her own school, with more appropriate scheduling of music within a full academic curriculum. The Crowden School relocated from a church basement to its present facility on Berkeley’s Rose Street in 1998, reincorporating as the Crowden Music Center and initiating its outreach beyond the walls of the school.

Music Within the Community

Since then, the Center has launched an assortment of unique, innovative activities. Consider the Very First Concerts series, begun this spring in collaboration 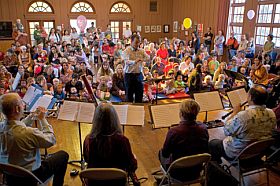 with the San Francisco Chamber Orchestra, whose leader, Benjamin Simon, succeeded Anne Crowden as the Center’s executive director. Kids aged 3 through 7 are invited to witness a performance of short pieces in an environment where they’re not stuck in chairs but can wiggle and giggle on tumbling mats, or rest in the securing arms of their parents. Another favorite event is the Instrument Petting Zoo, where children can roam the school from room to room and from instrument to instrument, with middle school students and adult professionals showing them how to make sounds on woodwinds, brass, and miniature violins and cellos. “Studying an instrument is a big commitment,” notes Crowden Director of Public Relations Jen Strauss, “and how can a kid know [which instrument to choose] without really trying it out?”

It’s assumed that some of the instrument “petting” may lead to enrollment in the school when interested children reach the fourth grade. Intimacy with an instrument, and proficiency on it, are not prerequisites for admission, but commitment is, for all parties. “Our students, our families, our audience members, our neighbors are all heavily involved; they all participate, and they all socialize with the faculty,” says Strauss. “We’re kind of warm and fuzzy, but the quality of instruction and experience is remarkable.”

The faculty, in turn, benefit the school and the Center through external networking: Many of them are working members of chamber and other ensembles, and they either host visits of their ensembles at the Center or arrange for students to attend their concerts. Several of the Center’s events feature performing faculty and administration, including Grodin and current Executive Director Doris Fukawa, both violinists. In fall 2008, John Adams, a former Crowden parent, brought fellow celebrated composer Philip Glass in for a question-and-answer session with students. Adams had his own 60th birthday commemorated by the formation of the John Adams Young Composers Program, with major funding from the Ann and Gordon Getty Foundation.

All this support is not intended to create a cadre of musical snobs. “We say we create virtuoso children, not virtuoso musicians,” says Strauss. “Our emphasis is on teamwork,” adds Grodin. “Playing an instrument is one thing, but stepping into an ensemble where you get clues and are giving cues is a completely other scenario, another skill set.” 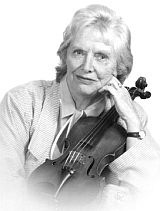 It follows that a child’s individuality is respected and that competition is discouraged. “We have to recognize that if someone just won a prize, we’re going to cheer them on at assembly,” Grodin states. “But, hopefully, it’s not meant to put other people down; it’s only meant to bring everybody up.” There’s financial support as well: More than 40 percent of students receive tuition assistance.

Grodin, like any good teacher, acknowledges — and appreciates — the differences among the school’s students. “Some people are much more attuned aurally; they pick it up by ear very quickly,” she points out. “And it really helps to notice that, at the same time realizing that that may be the kid who’s going to need a bit more reinforcement with reading the music. And it’s kind of interesting socially: The kids who are the most advanced on their instruments are not necessarily the most popular. A kid might be a really good [visual] artist or really, really funny or a really great actor, in the midst of all these other things that are going on.”

What’s going on at the school, as Anne Crowden intended, is two hours of instrumental study every morning, followed later in the day by music history, music theory, or composition (depending on grade level), integrated with the three R’s and other facets of the academic curriculum found at all schools. The student–teacher ratio is remarkably low, and students experience a variety of teachers and their variety of teaching methods (including Dalcroze, Suzuki, Orff, and Kodály) at every level, fourth through eighth grade. Although chamber music and associated small ensembles lie at the core of the Crowden pedagogy, numerous special projects and workshops are conducted, including puppet opera and folk improvisation.

“And you hear a lot of kids just improvising in the halls,” observes Strauss, who has also witnessed juvenile debates about overrated classics. “Our kids are open to experiences, and they’re not shy about asking questions or just telling people what they think.”

Crowden isn’t necessarily the appropriate choice for every family; if it were, the Center would have to expand its school well beyond its 80-some students. Yet the environment and methodology at Crowden present much that could be applied at other schools and in private music instruction, as well as at home. “A child’s enthusiasm,” says Strauss, “is infectious.” All our families could use a touch of that.