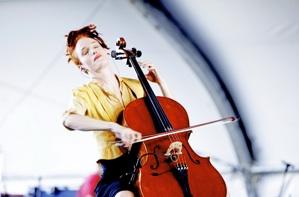 In 1995, Zoe Keating quit her day job so she could practice her cello for six solid months for her audition at the San Francisco Conservatory of Music. She loved playing in orchestras, and thought that a master’s degree would get her a step closer to a coveted seat in a cello section.

But at the audition, the confidence she entered with disintegrated quickly after some judges looked at her askance for not having a current teacher. Stage fright kicked in. “My hands shook, my bow shook, I couldn't remember the music. I could barely scrape the bow across the strings. I even dropped the bow,” she recalls. Someone stopped her after a few minutes, just as she felt she was getting over her shakiness, and suggested “condescendingly, patronizingly,” that she come back when she was more prepared.

“It was so incredibly humiliating,” she says. “It was the moment I turned my back on a classical music career.”

Risky Business: One String Quartet's Rise to the Top

Little did she know it was the best thing that could have happened to her. The loss of a traditional classical music career forced Keating to think of new ways to make a living with her passion for cello playing.

Fast forward 15 years. Keating is a resoundingly successful cellist — a one-woman orchestra who uses her cello and foot-controlled electronics to create music a reviewer recently described as “swoon-inducing. Like taking a triple-shot of Absinthe before stepping outside of the bar just in time to see the sun exploding.”

Her album, One Cello x 16: Natoma, rose to #1 on the iTunes classical charts four times, and to #2 in electronica. She describes her style as a mélange of classical minimalism, experimental electronica, and steampunk. She has more than 1.3 million Twitter followers. Her signature vibrant red dreadlocks, sumptuous outfits, and groundbreaking compositions and playing style have helped bring the cello out of the musty closet and into the vibrant mainstream. “She is awesome! God, I love the cello now!” is typical of comments about her videos on YouTube.

Keating is the poster child for today’s successful musician.

“To succeed these days, musicians have to be willing to diversify, to branch out, and take chances as never before,” says Michael Aczon, a Bay Area entertainment attorney and talent manager who teaches classes on the music business at local universities. “You have to learn the industry as much as you learn your instrument.”

So what does a music career look like today? One thing most experts agree on is that it doesn’t look like music careers of previous generations.

“Gone are the days of being purely a jazz saxophonist or classical string player,” says multidimensional musician David Cutler, associate professor of composition and musicianship at Duquesne University and coordinator of the school’s music entrepreneurship program. “Today’s musicians have to diversify and to be more entrepreneurial than ever.”

That’s because the playing field has changed in just about every square foot of the music landscape. The traditional model of the commercial music business has been in crisis for years, points out Lenny Carlson, instructor in the Music Department at City College of San Francisco. Much music can be downloaded freely; many record labels have downsized, or even gone out of business. “A big part of what a lot of people do for a living in the business doesn’t exist any longer,” says Carlson.

Adding to the pain, in the classical world the number of orchestra jobs continues to dwindle, while highly qualified musicians saturate the market. Competition for orchestra jobs is fiercer than ever.

“The chances of getting one of the major metropolitan symphony gigs in the U.S. can be compared to trying to make it on a major league baseball team,” says Aczon, author of The Musician’s Legal Companion. “It’s not impossible, but the odds certainly have to be taken into account.”

Sure, some lucky and talented souls do make it into long-term orchestra gigs, or manage to make a living doing what they were trained to do without putting a lot of extra time in, beyond practicing their craft. But increasingly, the musicians who don’t have to resort to a day job are the ones who diversify and become highly entrepreneurial.

Take Cutler. He’s a classically trained pianist and composer with all the talent, dedication, and advanced degrees that in the past could have kept him in a single music job for decades. But now, his poster could hang right beside Keating’s for the prototype of the entrepreneurial, diverse, socially relevant, successful musician.

On his bio on the Duquesne Web site, instead of a more traditional description like “pianist with the Pittsburgh Symphony Orchestra,” we find this intro to him: “... jazz and classical composer, pianist, educator, arranger, conductor, collaborator, concert producer, author, blogger, consultant, speaker, advocate, and entrepreneur.”

“My brand is that I’ll play anything and I’ll do anything,” says Cutler, who, among his current undertakings, is working on a two-person show with a dancer. They explore music and movement. He even wears a superhero costume for one number he wrote and she choreographed.

His is definitely not your grandfather’s music career.

Cutler also penned a book, The Savvy Musician: Building a Career, Earning a Living, and Making a Difference. (Jeffrey Zeigler, of the Kronos Quartet, called the book “Hands down, the most valuable resource available for aspiring musicians.”) In the book and in his music entrepreneurship classes, he highlights the myriad ways musicians can succeed in today’s changing climate.

What surprises him most is that he still sees students who believe that if they practice really hard and get good grades, life will work out for them. He says many teachers still impart this antiquated model.

“But these days, being a great player is not the goal — it’s the minimum,” he says.

So, beyond being exquisitely good at your craft, and being passionate about it, what does it take to make it as a musician today? Fine-tuning your entrepreneurial skills is key to adapting to the changing marketplace, say experts. Here are some of their tips for ways to make this work for you:

“Get outside your music ghetto,” advises Keating. That means thinking of unconventional venues for playing your instrument. For instance, if you’re classically trained on the French horn, look beyond auditions for orchestras and classical ensembles. “Maybe you have friends in a rock band. Talk to them about playing your French horn with them,” says Keating. “It’s unique, and something most people haven’t seen, and it can open many doors.” Aczon concurs that crossing genres is one of the best ways to diversify. “It’s an absolutely huge opportunity.”

“Take advantage of the Internet,” suggests Cutler. The Internet has helped even out the playing field for musicians, who no longer need to have the backing of a major record label to create a national profile. “With the Internet, entrepreneurial musicians are in control of their destinies,” he says. For instance, showcasing your music on YouTube and iTunes can cost nothing and lead to picking up a strong fan base and sales.

“Be really good at building relationships,” says Keating. It’s not new advice, but it’s particularly essential today. Both online and in “real life,” connecting in a genuine way with your audience and other musicians is an essential ingredient in cooking up a successful career. Keating’s 1.3 million Twitter followers are there because of her music, of course, but also because of her outreach to those who are interested in her music —not because of some slick SEO publicity machine. In a recent tweet before a performance at Yoshi’s jazz club in the Bay Area, Keating wrote: “I hope I remember (1) how to play the cello, (2) all the parts at the right time, (3) what button to press when.” Fans love the down-to-earth inside look she provides.

“Be willing to wear many hats,” remarks Cutler. The hats he wears could fill a hat shop. Likewise for Keating. As busy as she is on the musicianship end of the business, she does her own publicity and marketing, produces her own albums, arranges her own tours, and is available at the drop of yet another hat to deal with anything related to her music.

“Realize that TV is the new radio,” says Aczon. Thanks to the tremendous number of channels, there’s a big need for programming and for music to support the programming, he says. “Session recording, production music, composing for TV are all very viable options for the musician who thinks outside the box,” he says.

“Take a marketing class,” advises Aczon. Business courses in marketing can help today’s musician learn about marketing opportunities and come to understand the all-important role of branding in the arts. If you can get hold of an arts or music entrepreneurship class like Cutler’s, better yet.

It may seem like a fatiguing amount of work just to be able to have the joy of making a living as a musician. But while the challenge is certainly great, the potential benefits are even greater.

“Musicians have a job to do that doesn’t always mean playing the music of long-dead white people, in the same concert hall, to the same audience,” says Cutler. “Once you embrace what it takes to be a musician today, you open Pandora’s box, and it’s a whole new world of opportunity for musician and audience.”