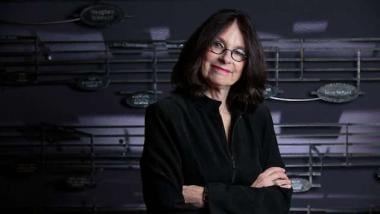 The California Jazz Conservatory on the March

Susan Muscarella speaks softly and carries big ambitions. Meeting up with her at the California Jazz Conservatory campus on a recent sunny afternoon in downtown Berkeley, she walked me across Addison Street to the new Fiddler Annex, which was in the final stages of construction. With office space, a student lounge, five practice rooms, and a large-ensemble studio, a library overflowing with LPs, CDs, and decades-old copies of Downbeat, and the 85-seat Rendon Hall concert space, the Annex expansion takes Muscarella one large step closer to her master plan.

“We’re making this the Juilliard of the West Coast,” she says, without a hint of braggadocio or hubris. The claim might seem grandiose, but you underestimate this woman at your peril. The CJC’s founder, president, and dean of instruction (and a formidable pianist in her own right), Muscarella has patiently shepherded the institution since she launched it 20 years ago in cramped quarters above a French cafe on Shattuck Avenue. Long known as the Jazzschool (the name still used for the CJC’s popular community music school), the nonprofit 501(c)(3) corporation took on a new identity in 2014 when it earned accreditation from the National Association of Schools of Music.

None of this came easily, particularly this latest expansion. Over the course of a year the cost of the Annex project doubled from $1.5 million to more than $3 million, and she’s still sweating over raising the last few hundred thousand. But with some five-dozen students enrolled in the CJC and hundreds studying in Jazzschool classes, she’s built an institution that’s helping shape the course of the music.

The fact that the CJC is the only free-standing, accredited college in the nation devoted solely to the study and performance of jazz is impressive. But the real proof of Muscarella’s accomplishment can be found among the CJC’s graduates, like drummer/vibraphonist Dillon Vado and guitarist Ian Faquini, who both debuted new ensembles earlier this month at the Community Music Center in San Francisco. In years past, ambitious, young, Bay Area musicians graduating high school tended to gravitate to Oberlin, Manhattan School of Music, or Berklee, which offered Faquini a competitive scholarship when he graduated from Berkeley High. With the CJC’s new degree program coming on line, he decided to avoid the “cold and expense” of Boston and stay close to home.

“I started during the school’s second semester ever, and it was a super cool experience,” said Faquini, who released his rapturously reviewed 2016 debut album Metal na Madeira (Ridgeway Records) as he graduated from the CJC. He studied with guitarist Randy Vincent, pianist/composer Marcos Silva, trumpeter Erik Jekabson, and percussionist John Santos, faculty who are all equally committed to their careers as performers. “I didn’t even know how to name the chords I was playing when I started,” he said. “I didn’t know theory. Needless to say, I learned so much.”

The CJC’s integration with the Bay Area music scene is on full display during the week-long celebration marking the Fiddler Annex opening. Since the school moved to its main campus in the basement of the historic Kress Building at the corner of Addison and Shattuck, the CJC has presented local and touring artists in Hardymon Hall, an intimate but acoustically challenging space. The Annex’s Rendon Hall offers a second in-house venue, and it’s getting a full shakedown with acts like the Montclair Women's Big Band on Thursday, Linda Tillery and The Cultural Heritage Choir on Saturday, and the Electric Squeezebox Orchestra with John Santos on Sunday afternoon.

Most of these artists are also on faculty, providing case studies of Muscarella’s profound gift for finding the right people to build her vision. Antonioli was running a prestigious jazz vocal program in Graz, Austria when Muscarella drew her back to the Bay Area. She’s turned the vocal program into a powerhouse, with an emphasis on developing material beyond the American Songbook. It’s a path she’s blazed in her own music, most vividly with her 2014 release Songs of Shadow, Songs of Light: The Music of Joni Mitchell (Origin Records).

In many ways, the album reflects the creative synergy of teaching at the CJC. Hanging out between courses with pianist Matt Clark, a member of Antonioli’s American Dreams Band who also plays for all of her vocal classes, he “started playing ‘Boho Dance’ and I just started singing along,” Antonioli said. “I started asking him, do you know this Joni tune, do you know this one? And he knew by heart just about every song she ever wrote, all the chords and lyrics.” He ended up serving as music director and primary arranger for Songs of Shadow.

Beyond classes on contemporary songwriters, Antonioli regularly brings in leading vocalists from New York and beyond to teach clinics and masterclasses, like Bleckmann, a capaciously inventive singer who’s equally at home performing with Meredith Monk or trumpeter Ambrose Akinmusire. While he does a weeklong CJC intensive every summer, Bleckmann rarely performs in the Bay Area. He makes his CJC debut as a special guest with Antonioli and the American Dreams Band as part of the Annex opening celebration on Friday, and also joins her for two shows Sunday March 4 at SFJazz’s Joe Henderson Lab.

No one exemplifies Muscarella’s genius for finding and retaining ideal faculty more than bassist/vocalist Jeff Denson. Since relocating from New York City to the East Bay in 2011, to take on the CJC’s first full professorship, he’s played an essential role in integrating the school into the international jazz ecosystem. The founder and director of Ridgeway Arts, he’s used the nonprofit to bring musicians from around the world to the CJC for performances and masterclasses, while producing and releasing albums by CJC graduates and faculty on his Ridgeway label (including Arctic by CJC drum instructor Alan Hall’s Ratatet and Eternal Life: Jeff Buckley Songs and Sounds by Negative Press Project, an ensemble co-led by CJC alumni Andrew Lion and Ruthie Dineen).

“I love the CJC and Susan is an incredible visionary,” Denson said. “I try to do everything I can to support the community. I didn’t create Ridgeway with the idea of recording students, but when I’ve heard them doing something special, that’s ready to be put out there, like Negative Press Project, it’s really exciting. These are artists we need to promote.”

As Muscarella finishes her tour of the Fiddler Annex, she seems most excited by the student lounge, a space equipped with a sink and fridge. “It’s a space for the students where they can hang out and fix lunch if they want to,” she said, sounding as much like a den mother as a dean. By paying attention to the human details, she advances her encompassing vision, knowing that the more comfortable the school is for students the more they’ll flourish. The goal for students isn’t so much technical excellence, though that’s a welcome outcome, as the ability to fully express one’s self.

“As we like to put it,” Muscarella said, “in as a musician, and out as an artist.”

Over more than three decades, Berkeley High School’s innovative jazz program has churned out talented amateur players as well as many professionals.