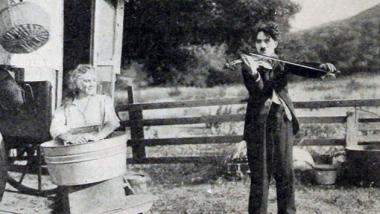 When you think of Charlie Chaplin, the image that probably comes to mind is “The Little Tramp,” the signature character with the moustache, bowler hat, and cane that he created in films like The Kid, The Gold Rush, and Modern Times. Chaplin described him as “a tramp, a gentleman, a poet, a dreamer, a lonely fellow hopeful of romance and adventure.”

Few people are aware that in the autumn of 1952, at the height of the Red Scare and Black Lists in Hollywood, Chaplin was sailing to England to celebrate the opening of his latest film, Limelight. While on the ship, he was informed that because of his affiliation with socialists and the Communist Party he would not be readmitted to the United States. Chaplin remained in Europe and many years would pass before he was allowed to return.

Ironically, the Communist associations that made Chaplin an “enemy of the people” in America made him a hero in the Soviet Union. Philippe Quint, who has established himself as an internationally renowned violinist, was born in Leningrad in 1974, the son of composer Lora Kvint. He remembers Chaplin’s films being a staple on Russian television.

“Soviet TV was very careful as to what was shown, and extremely censored,” he recalls. “We had three channels we could watch — two of them showed political debates or devoted hours to speeches by Soviet presidents, who at that point,” he adds, “were dropping like flies. But Charlie Chaplin’s movies were being shown constantly on television and in theaters.”

“I loved Chaplin’s films so much because of their accessibility,” Quint explained, speaking from his New York apartment. “Everything was there, transmitted through the faces and the situations. Then when you had the title cards, a voice would read them in Russian. I only have the vaguest memory of the music.”

You could say Philippe Quint has been channeling the spirit of Charlie Chaplin all his life. When he was young, he watched the movies on TV and even dressed up as The Little Tramp in kindergarten. When he came to live in the United States (and study at Juilliard) he collected Chaplin’s movies on videocassette. “I used to have them playing in the background for parties.”

Now, after a three-year process of research, arrangements, and recording, Quint has released a CD on Warner Classics, Chaplin’s Smile. It’s a collection of 13 songs and original suites drawn from Chaplin’s films and arranged for violin and piano. Quint is accompanied by the Chicago-based pianist, Marta Aznavoorian (of the Lincoln Trio) along with guest artist, Joshua Bell, who performs duets with Quint on several tracks. On the CD, as well as in concert, Quint performs on the 1708 ‘Ruby’ Stradivarius — on loan from Chicago’s Stradivari Society.

The CD includes a wealth of material beginning with “Eternally” (Terry’s Theme) adapted from Chaplin’s 1952 score for Limelight, which was withheld from release in the United States until 1972. When the film finally was released, it won the Academy Award for Best Musical Score. But when the Oscar was handed out (at the Dorothy Chandler Pavilion) it was Candice Bergen who accepted it for Chaplin.

But it all began with “Smile.”

“I was looking for a project,” the violinist recalls. “But it’s not that easy in classical music to find something that hasn’t already been done. There just isn’t that much repertory that hasn’t been explored, or [it] is work that deserves to be forgotten. One of the projects I had in mind involved music by film composers. I consider the Korngold Violin Concerto a work of genius and I have recorded works by Miklos Rozsa, who’s concertos and chamber pieces, including his Sonata for Violin are very under-appreciated.

“I heard a rendition of “Smile” [Chaplin’s most famous song, though he did not write the lyrics]. I discovered it on YouTube played by Gidon Kremer. I liked it but I thought I could create my own arrangement, which was strange because I hadn’t done any arranging for myself. I thought, ‘This is a nice little song, I can easily do the violin part and get some help with the piano.’”

The challenge Quint says he encountered was how to take Chaplin’s simple melodies and make them virtuosic, but without blowing them up to the proportion of a Paganini Caprice. Working with composer/arranger Charles Coleman, one song gradually became four, then five. When the catalog grew to seven, Quint knew he was onto something.

“There were no other arrangements of any of these songs,” he realized. “This was material that really had been neglected.”

He brought the project to Warner Classics and they took it on immediately, but said it needed more music. Over the course of three years, the number of songs and suites grew to more than an hour. The result is Chaplin’s Smile.

To promote the album Quint and Aznavoorian have been performing it in Los Angeles, Chicago, and New York, gradually developing a formula that includes the songs and musical source material that inspired Chaplin, accompanied by projected scenes from the films. Quint explained that when they find the right balance of music and visuals the intention is to put together a national tour with performances planned for the Bay Area.

Charlie Chaplin, despite his numerous composing credits (and Academy Award), had no classical training and could neither read nor write music. What Chaplin did possess was a finely tuned understanding of how music could influence an audience’s emotional involvement and understanding of a scene.Enter David Raksin — a student of Arnold Schoenberg who would become famous for his scores to films like Laura, The Bad and the Beautiful, and Forever Amber.

Chaplin hired Raksin to be his amanuensis. Raksin would sit at the piano with Chaplin as he picked out simple melodies or would simply hum. Raksin would notate Chaplin’s ideas and expand them into fully developed, orchestrated movie scores. Over time a long list of “helpful” arrangers would work with Chaplin including: Alfred Newman, Raymond Rausch, Arthur Johnson, Larry Russell, Boris Sarbek, Edward Powell, and Meredith Willson.

According to film historian and Chaplin expert Stan Taffel, the first printed piece of music to appear with Charlie Chaplin listed as the composer was a song called, “Peace Patrol,” a music hall ditty that was published in 1916. During the silent era, his scores for The Kid, A Woman in Paris, The Gold Rush, and The Circus were converted into cue sheets and supplied to theaters. It wasn’t until 1931, with City Lights, that people were able to hear Chaplin’s music recorded and played with the film.

“His musical training was nothing,” says Taffel. “He just loved music. He was never classically trained. He tried to take lessons on the violin but never could really play, although he loved to have his picture taken with a violin. If you watch the films closely, you can tell he can’t really play. He couldn’t write music. Often, he would just hum the notes and have someone like David Raksin write it down. He wanted the world to think he was an accomplished musician and conductor. There are film clips of him conducting, but you never see the orchestra. I’m not sure there ever was one.”

Both Taffel and Quint concede that Chaplin was also a musical thief who “borrowed” music freely, including from Debussy, Tchaikovsky, and Stravinsky. During the latter Russian composer’s years in Los Angeles, he proposed a collaboration with Chaplin, but it didn’t work out. Tassel describes a meeting where Chaplin made an off-the-cuff proposal to Stravinsky to make a surrealist film combining a decadent cabaret with a Passion Play. Stravinsky said he thought the idea was sacrilegious and walked out.

Kiera Chaplin, who was born after the death of her grandfather, has played an active role in helping to promote the release of Chaplin’s Smile.

“As I was growing up, I was well aware of my grandfather’s music because I attended so many screenings of his films, often with a live orchestra,” she said following the Jan. 14 performance in Los Angeles.

“I think the magic of these versions that Philippe has created is in hearing the music pared down to just the two instruments, the violin and the piano. When my grandfather worked on a scene, the result might look simple but a great deal of thought and rehearsal went into making it appear that way. I think that’s what Philippe has achieved in these recordings.”

Correction: In the original verision of this article, historian Stan Taffel's name was misspelled "Tassel." We regret the error.

The Sound of Music Rules at S.F. Silent Film Festival

The annual festival is packed with international artists and world-premiere restorations.