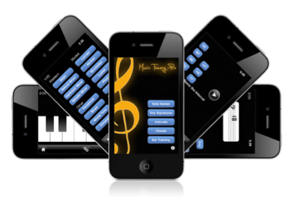 It’s true: There’s an app for pretty much everything. In this case, the app is Music Theory Pro, which combines aspects of music theory with ear training in an easy-to-use format. 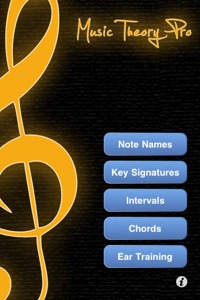 The idea for the application began when Dr. Joel Clifft, who teaches music both at Azusa Pacific University and at University of Southern California, was looking for something that would help him brush up on ear training. Surely it must exist, he thought. When a search proved fruitless, he decided that if he was looking for this, others would be, too. Thus, he began what would become his summer project. “I had no idea how involved it was,” he remarks. “I started the day after we finished school and submitted it the day before school started again. It was a 50-hour-a-week job.”

Once you download the app, you can choose from one of five sections: Note Names, Key Signatures, Intervals, Chords, and Ear Training. The app then becomes a game. Opt for one of the first four sections, answer the questions, and rack up a score. If you’re feeling competitive, post the scores online, either on Facebook or at the program’s Web site. If you’re unsure, tap the Help button at the lower right of the screen to learn more about the subject, and try again. The Ear Training section, designed for advanced music students, is more challenging, but still doable for those willing to risk the lower scores. You can also adapt each section to concentrate on one particular aspect of the subject and test yourself on that. 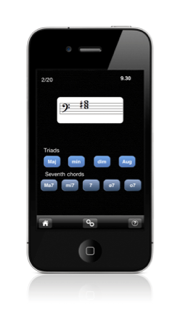 While the app is easy to use and the interface is refreshingly clean and clear, keep in mind that this is a companion to a textbook, not a replacement for it. For beginning students, some of the advanced help explanations assume a knowledge of terms that they may not yet have learned. Others have had trouble finding the Help button. Clifft is already looking at doing an upgrade, probably for next year, as he gets feedback from users, and admits that he did need to scale back some on this first go-round. Other upgrades planned include versions for the Android and the Blackberry, as well as a Web version. So far, Music Theory Pro is limited to the iPhone, the iPod Touch, and the iPad.

Even so, this little app is gaining a lot of attention. Although it is aimed at a specialized audience and really is designed as a study tool, not a game, it reached 10,000 downloads in the first four weeks and made the Top 200 list for apps in iTunes. And really, it’s just fun to play with.

Putting Pro Through Its Paces

SFCV asked one of our longtime contributors, Jeff Dunn, who is also a composer of piano and vocal music, to bang on Music Theory Pro for a weekend. Here is his review:

Even as a new iPhone owner, I found it easy to use. Moreover, it was fun for me, as a degree-bearing musician, and I believe it would be equally enjoyable for most music students. It is not for complete beginners, however. People who don’t know how to read music can get practice on this device on naming notes, and read some basic help pages, but it would be better for them to get some outside instruction first from a more detailed book or live instructor. For instance, they might not be able to figure out that “M7” on a touch field means “Major 7th” chord. 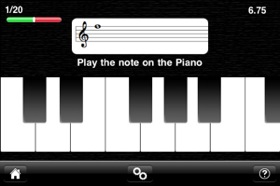 I ran into two basic difficulties in the course of testing the app. The first was in synching it to my iPhone. I had to upgrade the iPhone software first (to at least version 4.0) before I could get the software onto my device. The second was that 10 to 20 percent of my answers were right in my head, but recorded as wrong because my finger couldn’t hit the appropriate touch field. I might be a bit uncoordinated, but my fingers are thin. Future releases should space out touch fields as far apart as possible, or provide an option to edit your answer before you submit it.

Other than those two problems, I found the app to be well-designed, excellently structured, and, best of all, easily configurable to provide the amount of challenge to match its user. For instance, you can set the length of quizzes to be 10, 20, 200, 500, or even 2,000 questions. You can mix questions up between all categories per area, or limit them to a single category, thus focusing on items of difficulty — for example, diminished chords.

The Note Names option asks you to play, on a miniature piano keyboard, a note shown on a music staff in any one of four configurable clefs (alto, bass, treble, and tenor). The Key Signatures option asks you to identify one of 15 possible keys given a written key signature in sharps or flats. The Intervals sub-app asks you to identify an interval on a score and indicate whether it’s major, minor, diminished, augmented, or perfect. If you navigate to Chords, you are asked to name chords on a staff and indicate whether they are major, minor, diminished, or augmented triads; or to identify the kinds of seventh chords they are: major, minor, dominant, diminished (at the fifth), or doubly diminished (at the fifth and the seventh).

The Ear Training option has four submenus of its own: Tempos, Intervals, Scales, and Chords. The Tempos submenu will play a certain number of beats per minute, a number that you have to guess, using Stars and Stripes Forever as a benchmark at 120. Intervals will play an interval of two notes sequentially or simultaneously, and will ask you to name the interval. Scales will play up to 15 different kinds of scales and modes and ask you to identify them. The Chords area will play triads and sevenths for your identification pleasure or frustration (or both); but the good news is, you will get better the more you listen.

As you take the quizzes, you receive a mix of six encouragements (like “Bravo!”) for right answers, and corrected demonstrations for wrong answers. When you’ve finished a set of questions (20 is the default), you’ll get a score, along with canned cheers if you get all 20 right, plus the honor of being called a “Supreme Master Virtuoso!”

Music Theory Pro is a no-brainer at its current price of 99 cents to download from iTunes. It provides excellent training for music students at all levels, and (short-lived) fun for professionals.

Jeff Dunn is a freelance critic with a B.A. in music and a Ph.D. in geologic education. A composer of piano and vocal music, he is a member of the National Association of Composers, USA, and serves on the board of New Music Bay Area. A photomontage enthusiast, he illustrates his own reviews.