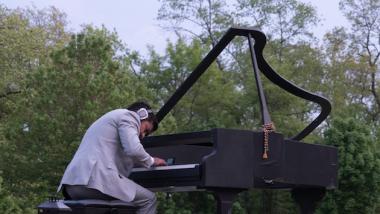 Control Freaks: Why Composers Are Experimenting With Putting Audiences in Headphones

Can wearing headphones enhance a live concert experience? Some composers and presenters believe so and have been experimenting with the pros and cons of outfitting live audiences with headphones.

If this idea raises your hackles, you aren’t alone. I was skeptical of the idea at first. Live processing sound sterilizes the natural acoustic of the room, an integral part of the concert experience. And putting in earbuds is an inherently isolating gesture. But this also means that, regardless of where you sit in a hall, your experience will be the same as your neighbors. Your experience is equalized. And live processing sound opens up whole new avenues of expression in terms of directional input and real-time adjustments to saturation and reverb.

“This is just a new option. A paradigm shift,” said New York-based composer Christopher Cerrone in a phone conversation. “Nothing’s going to be permanently replaced. We’re not there.” Cerrone composed the opera Invisible Cities, a finalist for the 2014 Pulitzer Prize in music, for performance in Los Angeles’s Union Station, where the typical traffic and hubbub would make a live performance difficult to stage for a large group of people. The production provided pairs of Sennheiser headphones to each individual listener and sent them wandering around the station to interact with the opera at their own pace. “That piece is focused on these very quiet sounds,” said Cerrone, who has also used headphones for performances of his other works. “The idea was to create intimacy, something very difficult to do in large spaces.”

Using headphones, performers can play with a degree of subtlety that would normally be lost as the sound travels the distance between stage and audience. “The sound is what matters to me, not the technology,” said composer Steven Bryant, who has been commissioned by the Pittsburgh New Music Ensemble to write music specifically intended to be performed with the aid of headphones and a head-shaped, binaural microphone. (Binaural technology, sometimes called "dummy-head" recording, is a decades-old oddity in the recording industry, which processes sound in three dimensions in a similar manner to the human ear.)

Bryant attended PNME’s summer concert series in July and wrote fragments of material to test the capabilities of the technology. “Learned habits are out the window,” Bryant said. “It’s been eye-opening as to what works and what doesn’t.” The ensemble performed the fragments in a workshop opened to the public, which I attended.

PNME is, to the best of their knowledge (and my fact-checking), the first ensemble to experiment with live binaural sound, though binaural recordings are fairly mainstream, with even the BBC experimenting with it during the 2017 Proms. After putting on the headphones, I felt like I was onstage with the performers. Soft solo or duet work was especially clear, loud passages for large ensemble quickly overwhelm the mic. In more contrapuntal passages, the musicians leaned towards the mic, causing their lines to sound closer or farther away from listeners depending on the importance of the line. “There’s a hyper clarity to this sort of playing, and the flip side is that flat playing feels exceptionally flat,” Bryant said. “But when it works, it really works, especially in terms of foreground and background.” He added that in larger concert halls with PA systems this sort of detail would be impossible.

Outdoor concerts also stand to benefit from asking listeners to wear headphones, which pianist and composer Murray Hidary is capitalizing on in a series of concerts he’s termed “Mind Travel.” Hidary is currently touring the globe with this project, which pairs improvisational playing with guided meditations or nature hikes.”

“Putting the audience in headphones worked especially well at places like the beach and Central Park,” Hidary said. “Outdoors, the pragmatism of giving somebody a quality experience like this is hugely positive. No amount of speakers will save a piano and orchestra from sucking outdoors.” Hidary uses a mixture of binaural beats, shown to reduce anxiety, and gentle, ambient piano improvisations to help his listeners enter a space of mindfulness. He said that using headphones allows his audience to adjust their experience as well, especially in terms of volume. “With headphones, everyone has a front row seat,” he said. “There’s not a bad seat in the house.”

But that control is the key to the experience. Live processing sound allows composers and sound designers control over everything from volume and blend to reverberation and saturation. Listening to music on the beach can sound like music in Carnegie Hall. Of course, it won’t feel that way — Hidary said that the feeling of vibrations a listener experiences in a hall is an integral part of a performance. “I think composers, directors, producers are interested in more immersive, site-specific experiences,” he said. “But you want to feel those molecules going through you — I want people to feel it.”

Indeed, at the PNME workshop, there was a disconnect between watching the players and hearing the music, as the binaural technology allows players to control the direction from which listeners experience the sounds. So when a player moved closer to the audience but farther from the microphone, the sound became more distant, for example. Cerrone said he intends to explore this tension between what an audience member sees in terms of space and musicians and what they hear in future compositions. “I’d want to take advantage of the acousmatic quality in music,” he said. “For example, using an entire offstage ensemble and onstage ensemble at the sane time.”

“For the control freaks out there this is ideal,” said Bryant, a cheerfully self-proclaimed control-freak. “This isn’t going to replace a hall, of course. It’s just another option.” Outfitting an entire theater with quality audio technology is expensive; it’s not likely to catch on immediately. And it’s still in an early phase — time will tell if the extended range of expressive capabilities is worth the expense and hassle. “I wouldn’t want to live in a world where there’s nothing but binaural experiences,” Cerrone said. “But I’d love to live in a world where there are a lot more of them.”

Correction: In the first photo, Murray Hidary was misidentified as Michael. We regret the error.

Recordings to Save Classical Music? Cheers to That

A Stanford conference on classical music’s recorded legacy suggests possibilities for the future.

The Fifth Wall: Next Generation Digital Technology and the Arts

What questions do arts organizations have to ask about technology, and how do we mediate between the desires of younger audiences and the essential “liveness” of music performance?