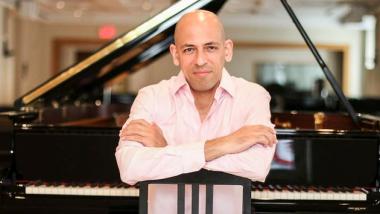 Self-possessed, soft spoken, and professorial, Venezuelan-born pianist, composer, and bandleader Edward Simon radiates quiet intensity. He’s not so much a musical radical as a persistent explorer who has spent his career expanding jazz’s frontiers as part of a wave of conservatory-trained Latin American musicians immersed in jazz, the European classical tradition, and various manifestations of folkloric and popular music. In a series of conversations that started on a rehearsal break for the SFJAZZ Collective, the all-star ensemble in which Simon is now the longest serving member, he talked about his musical path and his increasing opportunities to explore the full range of his creative interests.

Beyond his work with the Collective, which plunged into the seminal 1969 funk and fusion of Sly Stone’s Stand! and Miles Davis’s In a Silent Way this season, Simon teaches at the San Francisco Conservatory in the recently founded Roots, Jazz and American Music program. He just signed on with the Bay Area nonprofit Ridgeway Arts as associate artistic director, working with bassist, composer, and California Jazz Conservatory Dean of Instruction Jeff Denson to curate the Ridgeway Arts Presents concert series. Ridgeway Records is also releasing Edward Simon 25 in May 2020, a retrospective of his quarter-century career as a recording artist, and a live solo album in 2021.

But no organization is providing wing-spreading space quite like San Francisco Performances, which tapped Simon to reboot the popular KDFC Salon Series. With the sale of the Hotel Rex and the loss of the cozy cabaret style room, SFP moved the series to the fourth-floor education studio of the War Memorial Veteran’s Building “in the space that was one of the first MOMA galleries in the city,” says SFP President Melanie Smith. “It’s a big open gallery space and we’re working on the bar service right now.”

Simon first connected with San Francisco Performances in 2006 accompanying the great Brazilian vocalist/composer Luciana Souza. She presented her settings for the poems of Pablo Neruda as part of the Salon series, a program that SFP’s founder Ruth Felt loved so much she booked the duo at Herbst in 2008. “It was so arresting,” Smith says. “With Edward’s ability to play jazz and classical repertoire so elegantly I thought having him there is the perfect way to restart the Salon concerts.”

Given wide latitude in programming the Wednesday series, Simon decided to focus on classical music adjacent to jazz “something that I don’t normally get to do,” he says. “I love classical music. I’m been playing it since I was little, but even though I trained that way in college I’m not a classical pianist. Jazz became my focus much of my adult life, but in the last 10 or 15 years my interest in classical has had a revival, and I’ve continued to play and study it.”

The Salon series reboot opens on Jan. 15 with a solo recital by Simon exploring music by the Catalan composer Federico Mompou (1893–1987). On Feb. 5, 2020, Simon performs José Bragato’s trio arrangement of Astor Piazzolla’s Cuatro Estaciones Porteñas (Four Seasons of Buenos Aires) with Icelandic violinist Hrabba Atladottir and cellist Edward Gaenslen. He returns to the solo format on Feb. 26 and concludes on April 15 with Venezuelan flutist Marcos Granados playing the pianist’s ode to his homeland, Venezuelan Suite, along with several other pieces.

Simon credits Luciana Souza with introducing him to Mompou’s music. The majority of her pieces on 2004 album Neruda (Sunnyside) feature introductions or postludes drawn from his ethereal series Cançons i danses (Songs and Dances). He was so smitten with Mompou’s tunes that he included his “Prelude #9” on 2007’s Unicity (Cam Jazz), a stellar trio session with bassist John Patitucci and drummer Brian Blade. While the distilled lyricism of Mompou’s themes could serve as a muse for his improvisational imagination, Simon isn’t inclined to elaborate on perfection.

“The music is so beautiful as it is that I feel adding anything more would seem superfluous,” he says. “The pieces are short and concise. He had this talent to get right to the essence of the message and say the most with the least notes. Adding improvisation wouldn’t make it better, though it would be more sexy for people to know a jazz improviser’s going to be improvising on Mompou. I don’t think I should do that. They can come to the jazz concert.”

Part of what’s fascinating about Simon’s Salon programming is that he’s exploring composers deeply informed by jazz and improvisation. Piazzolla was always ready to collaborate with jazz artists, most famously vibraphonist Gary Burton and baritone saxophonist Gerry Mulligan. “When you hear him he’s a very expressive improviser himself, with long sections completely improvised in that tango language,” Simon says. “I can hear the way his pieces come from improvisations in the way he wrote his music.”

The theme of blurring distinctions between jazz, classical, and folkloric music continues on his second solo recital and the duo with Marcos Granados. In addition to original compositions, Simon wants to focus on Venezuelan composers who should be better known, like guitar great Antonio Lauro (1917–1986) and pianist Aldemaro Romero (1928–2007), a pioneering Venezuelan artist who took from jazz and brought it together with popular songs, symphonic music, and folk music.

“There seems to be this overarching theme, improvisers who are composers,” Simon says. “But many classical composers were improvisers, Mozart and Bach and Chopin for starters. That element has always been there. But in classical music, the music has evolved to where those became two separate roles. I wonder whether we’ll ever see that full-time division in jazz.”

Simon grew up in a household filled with music. His father, Hadsy Simon, hailed from Curaçao in the Dutch West Indies. A specialist in metal corrosion who moved to the Venezuelan oil port Punta Cardón and became head of Shell’s department of metals, he instilled a love of music in his sons, percussionist Marlon Simon, trumpeter Michael Simon, and Edward (the brothers reunited recently for the project Simon, Simon and Simon: Evolution of a Dynasty).

“My father was a very interesting man, always a searcher for truth,” Simon says. “He was a musician too who played guitar and sang. He introduced us to music very early on and supported our interest. There’s so much to thank him for. My older brother played timbales at the time, and we had our band, playing parties and anniversaries. In a way, that strong connection with the dance floor and dancers left a great imprint on me. To this day, a groove is an important element in my music.”

He was serious enough about the piano that at 15 Simon left Venezuela and moved by himself to Pennsylvania to enroll at the Philadelphia Performing Arts School, a now-defunct private academy. He continued his classical studies, but he also discovered jazz and eventually connected with Philly masters like bassist Charles Fambrough and guitarist Kevin Eubanks, who encouraged him to move to New York.

Landing in Manhattan in 1988 at the age of 19, he quickly established himself as an essential new voice, through touring and recording with altoist Bobby Watson and trumpeter Terence Blanchard. Part of a wave of brilliant Latin American musicians infusing the New York scene with influences beyond Cuba and Brazil, Simon recorded a series of acclaimed albums documenting his growing ambition as a composer. Years later, looking for a family-friendly environment to raise a family, he and his wife relocated to central Florida, which he used a base for a decade of international touring and teaching. In 2014, the Simon clan decamped for the East Bay, eventually settling in Emeryville.

He’s taken his time integrating into the local scene. He’s performed regularly at Piedmont Piano, the SFJAZZ Center, and the California Jazz Conservatory. Signing with Ridgeway Arts is another major step in taking a leadership role in the Bay Area. SF Performances’ KDFC Salon Series offers a whole new view of the pianist, strengthening an already fruitful relationship. “Oh yes,” says SFP’s Smith, “after the Salon series finishes he will not be a stranger.”

Correction: This article as originally published incorrectly referred to Ruth Felt as SF Performances's "late founder." She is very much alive and we've never been so glad (though abashed) to make a correction.

The renowned keyboardist learned from the best. He’s in the Bay Areas for a variety of gigs, including dates with red-hot singer Veronica Swift.

The influential jazz pianist inspires with his adventurous, playful spirit at the California Jazz Conservatory.