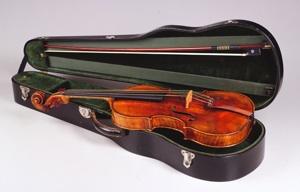 Embodied Spirit: The Journey of a Famous Violin

In 1845, the virtuoso German violinist Ferdinand David stood onstage at the Leipzig Gewandhaus and premiered his friend Felix Mendelssohn’s Violin Concerto in E Minor, an instant classic that is considered one of the greatest violin concertos ever written. David, the Gewandhaus orchestra’s concertmaster, played Mendelssohn’s innovative masterpiece on a prized Guarneri del Gesù violin. 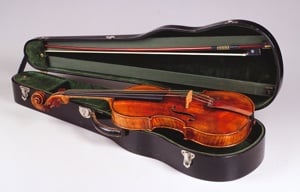 An Interview With Alexander Barantschik

Next week, San Francisco Symphony Concertmaster Alexander Barantschik (nicknamed “Sasha”) will perform the beloved concerto on what may very well be the same instrument: the 1742 Guarneri del Gesù, known as the “David.”

Owned for many years by Barantschik’s idol, Jascha Heifetz, it was one of three Guarneri violins owned by David. Heifetz willed the priceless fiddle to San Francisco’s Fine Arts Museums, which loaned it to the Russian-born Barantschik when he joined the Symphony in 2001. (Gidon Kremer owns one of the other Guarneri del Gesù violins from David’s collection, while Midori plays the third.)

“Nobody really knows for sure which David was used at the premiere of the concerto, but there’s a big chance it was this one,” says Barantschik, who will perform the work April 7 at Flint Center and April 8 and 9 at Davies Symphony Hall with guest conductor Osmo Vänskä. He can still recall the sound of the instrument on the dazzling Heifetz recordings he devoured as a kid in St. Petersburg.

“If you were to compare it to singers, it’s something in between a beautiful soprano and something like Ella Fitzgerald. It’s got a little sand in the voice,” says the wry and elegant violinist, making a little growling noise. 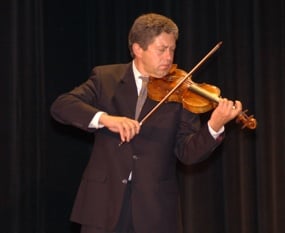 “It’s very distinctive. It’s rich, and dark and complex. The other important quality is the focus of the sound. Many violins can produce a lot of sound, a big volume. But if the player tries to play softly, the sound somehow disappears and it’s difficult to really understand the articulation. With this, I can play as soft as I want, and I know that people in the back of the hall will hear it. The sound projects. It’s like a narrow light beam that just flows.”

Barantschik, a robust 57-year-old with rosy skin and gray-flecked dark hair, is sitting in his Davies Hall dressing room on a rainy afternoon. Two photographs of Heifetz playing the “David” hang on the wall (one was shot on the set of the 1939 film They Shall Have Music, in which he played the Mendelssohn Violin Concerto); a photograph of Heifetz’ teacher, Leopold Auer, inscribed in Russian by Auer to his illustrious pupil, sits on the upright piano (Barantschik received this as a gift).

Barantschik, who’d been practicing the lyrical passages of an Arensky piano trio for an upcoming chamber recital, shows a visitor the gleaming Guarneri, and ponders its rich past.

By the time David got his hands on it, the instrument was already a century old. “Imagine how much this violin had to endure,” Barantschik says. “Those were good times when a concertmaster could afford to buy three Guarneris,” he adds with a laugh. He has no idea what those violins cost in the 1840s. The one he plays has been called a $6 million instrument, but “no amount of money could replace it. It’s priceless. Money is irrelevant.”

Barantschik first saw the violin in a display case at the Palace of the Legion of Honor. As per Heifetz’ instructions, the instrument was played from time to time by prominent artists like Isaac Stern, Itzhak Perlman, and Gil Shaham. But it was silent for long stretches, which is not good for string instruments. They need to be played. 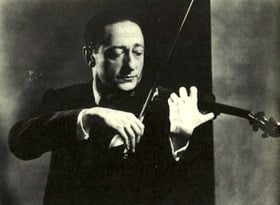 When Barantschik first played the “David,” he felt he had to wake it from its slumber.

“It took a good year to actually feel that it was getting back to life and responding,” he says. “Apart from that, this violin is not an easy one. There are some violins that are user-friendly. Many Strads [instruments made by Stradivari] are user-friendly. This violin does not make friends easily. You have to figure out how to deal with it.”

Playing the same instrument as David and Heifetz and Pablo de Sarasate, who briefly owned it, puts a lot of pressure on Barantschik. It’s a big responsibility, he says.

“You realize how many great sounds, how many acclaimed performances, came from this instrument. It’s phenomenal. It’s a great privilege to play it. It’s a privilege for my colleagues to hear this quality instrument, and, more importantly, for our audiences to hear it. But it’s not like there’s only one great violin. We have many wonderful instruments in the orchestra now. And it makes a difference. It’s obvious on the recordings.”

It’s been more than 15 years since Barantschik has played the demanding Mendelssohn, which he ranks alongside the Beethoven and Brahms as one of three all-time-great violin concertos. It’s classical and romantic, he says, not Mozart but not Brahms, either — a perfectly shaped and balanced work that’s light and elegant, and at the same time urgent and dramatic. 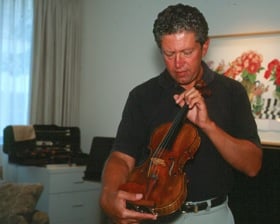 “That’s Mendelssohn’s soul; that’s his music,” Barantschik says. “There are phenomenal melodies that nonmusicians can whistle easily. The violin part is very brilliant and the orchestra is supportive. Everything is just right. The first movement is dramatic and intense, with little moments that are like oases of incredible beauty and reflection in the middle of the turbulence. The second movement is one of the most beautiful melodies ever written, and the third is full of joy. It’s not just a show-off piece, it speaks to people’s hearts.”

Barantschik has a special affection for Yehudi Menuhin’s first recording of the concerto, made when the San Francisco–bred prodigy was 12 or 13. He’s touched by the innocence of the playing — “only a child can play like this” — and at the same time, amazed that a musician so young could express feelings that seem fueled by life experience.

Heifetz, though, is his main man. Barantschik listens to the master’s recordings to hear the range of sounds Heifetz drew from the instrument, and what he did with them. Aside from his phenomenal technical abilities, it’s Heifetz’ “super-human drive” and powerful musical presence that bowls Barantschik over.

“It’s like a tsunami,” he says, laughing. “Everything just goes and goes and goes. He never hesitates. There are many great players, wonderful players, geniuses. But after you’ve heard a piece played by Heifetz, it’s difficult to hear the same piece recorded by someone else. It’s not the same. It’s not as intense. There’s an intensity to his sound and phrasing.”

Barantschik points to the “David.” “This guy helped him keep that intensity.”