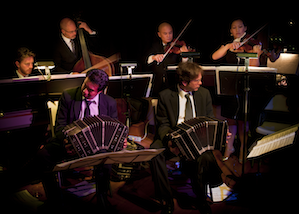 The antique clock on the wall shows it’s past midnight, and the dim light of the Verdi Club in San Francisco’s Mission District illuminates what might be an exotic and erotic dream. The ballroom is packed with swaying, dipping, fantastically garbed couples, the men’s arms extended ardently around the backs of their female partners, who lift their stockinged legs high and writhe sensuously below the line of embrace. The bodies of the dancers channel the sounds created on the stage at the far end of the ballroom by an ensemble whose style of dress and performance echo a bygone era, but whose musical shudders and paroxysms are vital and compelling in the present moment. This is tango.

Leading the group is Seth Asarnow, seated in front of the violins, bass, and piano and propelling one of two bandoneons, the large, rectangular, button concertinas long considered the “voice” of tango. This was also the instrument of the Argentine composer Astor Piazzolla, who, before his death in 1992, had much to do with ushering tango beyond the dance floor and into classical concert halls and recording sessions.

Asarnow himself was recommended by violinist Jeremy Cohen to sit in with the San Francisco Symphony on the premiere of Cohen’s arrangements of a pair of Piazzolla pieces, Melodia in La Menor and Libertango, in 2006 (reprised earlier this year). During a lunchtime chat, Asarnow reports that, “the best part of that evening was watching Sasha [Barantschik, SFS concertmaster] play, just three feet away. Later he said — and I have to believe him — that he really enjoyed working with me, that he likes what I play and the feeling we got. And he enjoyed changing little things, from night to night. If he heard me change something, he got inspired to think, maybe I’ll hold this note a little longer. That’s very cool, especially for a classical guy.”

Smaller Bay Area symphonic and chamber ensembles have also sought Asarnow out. He had nine years of classical training during his Marin County upbringing, when he also developed “an affinity for old, nostalgic-type things. I always liked old radios, old instruments, 78 rpm records, and my mom had a few [tango] 78s, though not super-authentic stuff. I loved [tango] as a genre, with the scratchy 78 thing. Later, I saw a piece on KQED about Carlos Gardel,” the most prominent tango performer in the early 20th Century. “And at about that same time, the show Tango Argentino, which had been put together in Argentina and came through New York, came here to the Curran, maybe in ‘85. I was just enthralled, to hear that music live and see those old men hunched over, playing the bandoneon on their laps.”

Asarnow found work on piano or bass in a variety of Bay Area jazz clubs, and later with Cohen in his Violinjazz ensemble. He continued to collect “instruments that I didn’t play, from China and India and elsewhere, just ‘cause I was interested in how they work. There was an Argentine club in the Mission [District], called Sociedad Gardeliana (the Gardel Society). I went down there and had a meal, and there was a bandoneon player. I mentioned to someone that I really wanted to buy one of those, and the guy who was playing said, ‘Here, how much you got?’, because he was going back to Argentina. It cost me thousands, but it still turned out to be a good deal.”

Learning to elicit music from the two sets of buttons separated by bellows was a tougher deal, because with the return of the seller to his native land, Asarnow was left without a teacher. “On the accordion, there are generally pre-set chords and bass notes,” he points out, “where the concertina is all single notes. There was this guy named Heinrich Band who [in Germany, in the 1840s] took the concertina and added notes it didn’t have, to accompany more types of music. But when his bandoneon came over to Argentina, around the turn of the century, they took hold of it like no other culture, added notes, and turned it into a thoroughly chromatic instrument, over five full octaves.”

It took 13 years of intermittent study — “sometimes it was left in the closet” — before Asarnow felt confident about performing.

It took 13 years of intermittent study — “sometimes it was left in the closet” — before Asarnow felt confident about performing. In the meantime, “I was listening to pretty much all tango” and learning the form’s history. “Piazzolla’s father was from Italian immigrants [at the turn of the century], when people had come [to Argentina] to work the land and make money and send it back to their families. It wasn’t so different from New York. They were rounded up into these little tenements, they were sad, and there were fifty males to one female. So the whorehouses were a big enterprise, and where did they play tango? In the whorehouses.

“We had ragtime in the whorehouses” in the U.S., Asarnow continues, “and eventually it got legitimized. And with tango it got legitimized, when French people got ahold of it.” Rudolf Valentino’s performance in The Four Horseman of the Apocalypse provoked American curiosity about the tango in 1921, “but it was kind of a cartoonish rehashing”. In Argentina, championed by Gardel and others, tango entered its Golden Age, holding on to its sensuousness while leaving behind the association with the bordellos. Asarnow’s arrangements, including those performed at the Verdi Club, are mostly based on recordings from this period.

“There is a way of playing which has been out of style for forty years,” Asarnow points out. “It comes with the energy of the piano, and the ups and downs, dynamically, of the bandoneon, and the attack, and especially those slides, in the violins, with a kind of vibrato. Gypsy, if you want to call it that. And that’s how Heifetz or Zimbalist or Elman wanted to play. They wanted to move you. But what used to be beautiful became ‘corny’,” for later performers of both tango and classical music.

Piazzolla, in the latter half of the 20th century, was seen by some traditionalists as dragging tango, kicking and screaming, into a new arena. He’d studied in Paris with Nadia Boulanger who’d encouraged the Argentine, as she had other foreign nationals, to explore his native musical roots. “So he said, ‘I’m gonna use jazz harmonies, and more modern classical harmonies.’ He wasn’t coming at it from, ‘I hope people can dance to my music.’ He didn’t care about that.”

“Piazzolla wasn’t coming at it from, ‘I hope people can dance to my music.’ He didn’t care about that.” — Seth Asarnow

Piazzolla brought his revamped tango to the stage of San Francisco’s Great American Music Hall, where Asarnow and a friend had been chosen to drive the composer and his ensemble after the gig to the Circulo Argentino in San Jose, for a meal. “I got to talk with him a little bit about tuning the bandoneon. I was just starting out, so I wish I’d known then what I know now. He came back later, to Zellerbach, and did a little lecture. He said a cab driver [in Argentina] had recognized him and forced him to get out of the cab. He was told, you can change everything in Argentina, but don’t change the tango!”

Although Asarnow treasures his brief time with Piazzolla, his own tango performances cling to the orthodox style favored by dancers in milongas, tango dancing societies like that which brought Asarnow’s group to the Verdi Club. “The scene is huge here,” he points out. “Any day of the week, if someone wants to dance, they can go to 12 or 15 places. There’s a lot of Asians who are doing tango, and the Russians also love tango; they get the longing and the feeling part.” Although the Verdi Club lost its monthly stand there (to a salsa group), Asarnow will bring his group back to that venerable ballroom for a one-off on August 22. They’ll also perform July 4-6 for Nora Dinzelbacher’s annual Tango Week, at the Marriott in Burlingame. (Asarnow also appears regularly in a duo with guitarist Marcelo Puig.)

And back in Argentina, reports Asarnow, “there’s a huge resurgence of young people who wanna learn [tango]. It’s their art form, like jazz here. And just like in this country, sometimes it has to skip a generation. You start discovering it, and it starts to have meaning for you.”