If there was ever a singer who could unselfconsciously release an album titled The Beautiful Voice, that person is soprano Renée Fleming. Of course, Fleming long ago ascended from diva to celebrity, but everything comes back to the fact that she has one of those voices that you could listen to sing the phonebook and it would be meaningful. And to say that is not to merely compliment her physical gifts — it’s not just the vocal cords that make a singer.

So what’s in a voice? In Fleming’s case it’s an almost superhuman consistency of tone production: her voice is full and colorful throughout her range and there are no tricky tones when she moves between registers. She has excellent diction, even in Czech, which is notoriously hard on singers, And the resonance and overtones of her voice surround you and pull you in, making her singing immediately identifiable.

Fleming has sung, if you count the parts she took in conservatory productions, 60 operatic roles. They cover everything from Handel to Mozart to every corner of the Italian “golden century” to French repertoire, Dvořák’s Rusalka, Richard Strauss’s countesses and others, roles in American opera premieres (Rosina in John Corigliano’s Ghosts of Versailles, Madame de Tourvel in Conrad Susa’s The Dangerous Liaisons, Blanche du Bois in Andre Previn’s Streetcar Named Desire), and operetta and musicals, including Nettie Fowler in Rodgers and Hammerstein’s Carousel on Broadway and Margaret Johnson in Adam Guettel’s The Light in the Piazza (both in London’s West End in 2019 and then at Los Angeles Opera). And when we get into the subject of song, it turns out she’s been very active inspiring and singing new music, and she’s recorded a jazz album as well as making forays into current American popular music. You can’t do that unless you’re a first-class vocal interpreter.

In the aughts, her celebrity really took flight: she sang “Amazing Grace” in New York after the 9/11 attacks, sang at the 2009 inaugural ball for President Obama, the Diamond Jubilee for Queen Elizabeth II, the 25th anniversary of the fall of the Berlin Wall, and her rendition of the national anthem at the Super Bowl in 2014 was hailed for being one of the best ever. She’s been featured on numerous movie soundtracks including 2002’s The Return of the King and Julianne Moore’s singing voice in the movie of Ann Pratchett’s Bel Canto.

It’s merely an asterisk to note her 14 Grammy nominations (and four wins) and her Tony nomination for Carousel, because award committees are not exactly immune to celebrity. Chef Daniel Boulud created a dessert in her honor, she has a fragrance, she’s been named to Blackwell’s best dressed list and has worn specially designed dresses from many renowned designers. (The Vera Wang original she wore at the Super Bowl has been added to the Smithsonian’s Museum of American History permanent collection.) She’s been a highly visible literacy advocate (and, naturally, has appeared on Sesame Street.) She has been an artistic advisor and board member for numerous organizations, including Sing for Hope, which creates access to high-quality arts programming in New York, especially for underserved residents. And, as SFCV reported last month, her interest in music and health has led her to become an advisor to the NEA/ UCSF Sound Health network, which grows out of her Sound Health Network initiative that she launched while an artistic advisor to the Kennedy Center for the Arts.

That summary is not nearly exhaustive.

So if you’re one of the people who have heard her sing some but are ready to take a deeper dive into her art, here’s a list of where to begin. And if you’re a Fleming fan, feel free to roast me for my uninformed choices here or on your choice of social media. 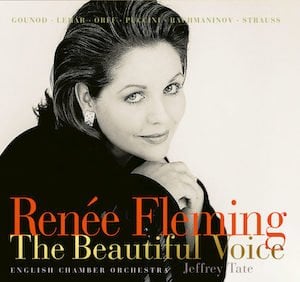 The Beautiful Voice (London, Feb. 1998). This album has Fleming’s recording of “The Last Rose of Summer” that was used in the movie Three Billboards Outside Ebbing, Missouri. But it’s a great set of music that ends with an unforgettable account of the Bailero from Joseph Canteloube’s Chants d’Auvergne. The sleeper on the album, for me, is a heartbreaking, unsettling account of “Marietta’s Song” from Erich Wolfgang Korngold’s Die Tote Stadt.

Great Opera Scenes (London Signature Series). Definitely not picking this 1997 recording of scenes from Fleming’s first triumphant decade because it was added to the National Registry in 2006. Or the fact that it was one of the last recordings by legendary conductor Sir Georg Solti. The album contains both of Countess Rosina’s arias from Mozart’s The Marriage of Figaro, the Song to the Moon from Rusalka, the heartbreaking Ave Maria from Verdi’s Otello, plus a few less standard pieces.

The Inner Voice: The Making of a Singer (2004, paperback 2005). Fleming’s candid autobiography is a must-have for fans, but it’s probably should be required reading for singers. 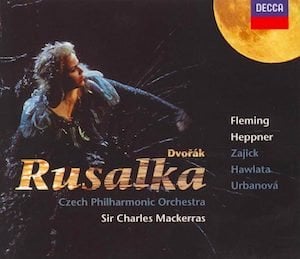 Rusalka (1998, London Records; 2006, TDK video of Opera de Paris production): Split decision here. One of Fleming’s most famous roles was captured in a fine CD recording conducted by Sir Charles Mackerras with an all-star cast and it’s undeniably a great performance. But in our visual age, you might want to see a full production to appreciate Fleming’s acting of the role and if that’s the case Robert Carsen’s modernized production with James Conlon conducting and a strong cast is slightly more recommendable than the Metropolitan Opera’s 2011 production, although if you have to have a traditional production, go with that one.

Der Rosenkavalier (2017 Metropolitan Opera on Demand; Strauss Heroines (London). Fleming’s characterization of the Marschallin in Richard Strauss’s romantic comedy has to be seen as well as heard. As the opera is partially a meditation on aging, it’s nice to be able to stream Fleming’s farewell performance at the Metropolitan Opera in a well-directed production by Robert Carsen. The summit is reached here. If you only want the Fleming highlights, choose the Strauss Heroines disc, and if you want to own a DVD rather than stream a performance, there’s a 2009 all-star cast from the Baden-Baden Festival in a Robert Carsen production, filmed by London Records.

Rodelinda (2013 Metropolitan Opera Live in HD DVD). Handel operas are successions of brilliant arias, but Stephen Wadsworth’s production is unexpectedly dramatic and well-designed. Fleming pulls the whole thing together with an utterly human and natural performance.

Richard Strauss: Four Last Songs (2009, London). I don’t want to overdo it on the Strauss, but it’s too hard to omit this gorgeous CD recording of one of the most beautiful song cycles. Fleming’s interpretations are fantastic, and she also shines in excerpts from Ariadne auf Naxos and a few more of Strauss’s songs. 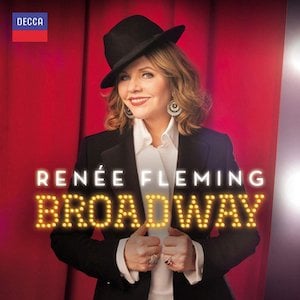 Broadway (2018, London). Classic musicals get the Fleming treatment. There are a number of surprises on this album: a song from Jeanine Tesori’s Violet, a Drama Desk-winning Off-Broadway musical from 1998; another from Sting’s The Last Ship (2014); and a third from Kander and Ebb’s musical of Friedrich Dürrenmatt’s play The Visit (2001, 2008) with a book by Terrance McNally). In addition, she does a cool pairing of “Children Will Listen,” from Sondheim’s Into the Woods with “Carefully Taught,” from South Pacific, sung by Leslie Odom, Jr. The album ends happily with a seductively breezy account of “All the Things You Are,” but this is an album showcasing Fleming’s mature artistry in different facets.

“New York Tendaberry” on Billy Childs’s Map to the Treasure: Reimagining Laura Nyro (2014, Sony). Fleming does one track on this album, but it’s a doozy: a duet with cellist Yo-Yo Ma on one of Nyro’s iconic songs. The whole album is very recommendable.

Distant Light (2017, London). Sure, this is an album dedicated to Scandinavian music, but it also includes Samuel Barber’s distinctly non-Nordic Knoxville: Summer of 1915. Fleming has a long history with this piece and her interpretation is close to perfect. Also on the disc is a song cycle by Anders Hillborg written for Fleming, and three songs by Bjork, which Fleming carries off with ease.

Renée Fleming Spins a Thread of Song at Cal Performances