Culture helps turn “them” into “us.”

That quote comes from Yo-Yo Ma’s website. If that’s the case, the cellist has done everything he can to unify the country and beyond. Apparently tireless, Ma, a United Nations Peace Ambassador, has won numerous awards, including the Presidential Medal of Freedom, the Glenn Gould Prize in Music, the Fred Rogers Legacy Award, and of course, being named Sexiest Classical Musician by People Magazine.

Ma was born in Paris to musician parents from China. At four years old, he sat on three phone books to start playing the cello. His family moved to the United States when he was 7 and that year he performed for President Kennedy (sharing the stage with others including Harry Belafonte, Bob Newhart, Marian Anderson, and Robert Frost). He went to Juilliard and Harvard (where he studied anthropology), played at Carnegie Hall when he was 16, and he has put out more than 90 albums.

Ma has done way more than talk about uniting people through music — his actions back him up. For example, he and his longtime friend, pianist Emanuel Ax, drove around in a flatbed truck during the pandemic playing pop-up concerts for essential workers including at a UPS loading site, a dairy farm, and a food distribution site.

Not content with the classical standards for which he’s known, Ma has also recorded traditional Chinese melodies, Argentinian tangos, and bluegrass music, as well as collaborating with artists including Carlos Santana and Bobby McFerrin. He’s appeared on Sesame Street and Mister Rogers’ Neighborhood, and writer Sherman Alexie wrote a poem about wanting to be his cello.

Ma seems to take very seriously the idea that to whom much is given much will be required, and he shares his stunning talent with the world in varied and innovative ways, giving us songs of joy and peace as well as comfort and hope.

Ma, with Stuart Duncan, Edgar Meyer, Chris Thile, and Aoife O’Donovan, will perform in Not Our First Goat Rodeo at the Greek Theater on Aug. 21.

Ma first played this piece when he was 4 years old and says he still learns from it. He recorded it in 1983, again in 1998, and once more in 2018. Ma grew up listening to Pablo Casals’s recording of this piece, which he describes as “sculptural.” Ma likens a piece of music like this to a great book that hits you differently at different times in your life, and how you experience it is influenced by the loss, love, and tragedy you’ve gone through.

Piazzola: Libertango (from Soul of the Tango: The Music of Astor Piazzolla)

One of the many ways Ma stands out is his openness to new things and his commitment to constantly learning. Astor Piazzolla, a barber’s son from Argentina, moved to New York as a teenager and loved Harlem’s jazz clubs. He eventually went to Paris and studied classical music with Nadia Boulanger, and then came up with a new style of tango. When Ma first heard his music, he called pianist Kathryn Stott, a colleague and friend, excitedly saying they needed to play it, that it made him feel alive. Listening to this might make you feel so alive that you want to sweep around the room.

The hashtag #songsofcomfort trended on Twitter when Ma played songs like Dvořák’s Going Home. He and Kathryn Stott made the album Songs of Comfort and Hope during the pandemic. They took on some standards, such as “Somewhere Over the Rainbow,” making them seem new and fresh. Hearing “Ol’ Man River,” so beautifully sung by Paul Robeson in Showboat, without the lyrics (I’m tired of living, but scared of dying) emphasizes the poignancy of this tune.

Beethoven’s Cello Sonata No. 3 in A Major

Yo-Yo Ma and Emanuel Ax have been playing Beethoven’s Cello Sonata No. 3 in A Major together for over 40 years. But in an interview with The New Yorker’s music critic Alex Ross, they say it took the pandemic to understand how open and hopeful the music is.

They point out that Beethoven wrote the piece when he was losing his hearing and Napoleon was at war with Austria, and that in difficult times like then and now, music can give comfort.

Ballet dancer Damian Woetzel sent a video of Riley to Ma, knowing he would like it. As with Piazzolla, when Ma gets excited about something, he makes things happen.

Spike Jonze recorded this on his iPhone at a meeting of the President’s Committee on the Arts and the Humanities, and it’s not surprising it went viral. You can hear gasps in the background as Riley twists, undulates, and seemingly walks on water to the melody. Ma, a generous performer, has said when he plays, it’s not about proving something, but about sharing something. Here he completely focuses on Riley, not needing to look at the music, which he has in his head. He’s comfortable making Riley a star, and as Ma always seems to do, he makes something he’s played hundreds of times seem fresh.

From bluegrass to Bach to his own bottomless fount of originals, the mandolin virtuoso does it all.

Ma reunites with a trio of expert bluegrass players on a new CD. 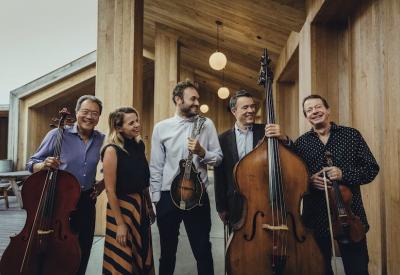 Not Our First Goat Rodeo

Tradition Has Many Meanings for Jeffrey Thomas and American Bach Soloists