George Martin: In His Own Write

By the end of the 1960s, George Martin — arranger, orchestrator, and producer for the Beatles — was one of the most successful studio producers in the world.  He had guided the quartet from their raw rock ’n’ roll beginnings to the expansive orchestrations of their later recordings. Time and again Martin expanded the definition of pop music with the likes of his groundbreaking electronic manipulation on “Tomorrow Never Knows,” the haunting chamber string arrangements of “Yesterday” and “Eleanor Rigby,” and the grand orchestral sweep of “All You Need Is Love.” And that was just one decade in Martin’s six-decade career.

The new CD/LP release The Film Scores and Original Orchestral Music of George Martin is an ambitious attempt to convey 60 years in the career of an incredibly eclectic composer and arranger. That it succeeds so well is due both to the joyful appeal of Martin’s music and to the vision of conductor-arranger Craig Leon, who captained the project.

Under Leon’s direction, the Berlin Music Ensemble’s performance here is deliciously rich and nuanced. The program, available on both CD and audiophile vinyl, hopscotches through the decades, illustrating how, from Martin’s early days at EMI’s Parlophone in the 1950s, his singular composing skill flew under the radar while he built his fame on arranging for The Beatles and James Bond films. 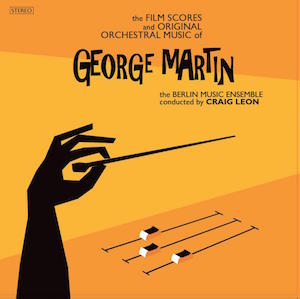 Well-known film score works flow into rarely-heard meditations on American themes, a Welsh pastorale, orphaned Romantic pieces, a Bach prelude, and finally a stunning chorale. Some pieces are recorded here for the first time. And the whole program makes for one delightful ride.

Starting off is The Pepperland Suite, five linked pieces from Martin’s Yellow Submarine soundtrack and almost surely among his best-known works. Those of us who grew up with the Beatles can be forgiven for taking producer Martin for granted back then. But hearing this score now, free from its original pop art trappings, allows it to inhabit its own vivid landscape. Better still, Leon’s production improves on the original soundtrack in every way, as if every instrument is fully lit and allowed to shine. Martin wrote for the symphony orchestra with a true romantic’s heart and Leon clearly appreciates that.

Still in his twenties, Martin wrote classical arrangements for Parlophone, one of which, his Prelude for Strings based on J.S. Bach’s keyboard Prelude in E-flat Minor, is included here, revealing a lightness and playfulness that followed Martin all through his career. His tempo strolls, and Leon coaxes out a lovely textural interplay between violin and cello. Perhaps it is no accident that Martin was drawn later to working with comedians as there is clearly a sense of humor running through his Bach arrangement. While still with Parlophone, Martin pioneered the seminal late-’50s comedy recordings of The Goons, whose troupe of unhinged geniuses included the young Peter Sellers and Spike Milligan, and without whom Monty Python may never have happened.

Conductor Craig Leon was clearly the man to tackle this project. His career sounds nearly as eclectic as Martin’s, from his edgy pop years working with The Ramones and Blondie in New York in the 1970s, to conducting and performing with Luciano Pavarotti and Joshua Bell, to his own original electronica, with many genre stops in between.

Other parts of the program present a tasting menu of moods, all sharing Martin’s thoughtful balance. Three American Sketches were originally scored for harmonica and string orchestra and here adapted by Leon for violin and chamber orchestra. Martin draws inspiration from American folk melody while giving nods to Copland, Ravel, Bernstein, and the Russian romantics. Judy’s Theme, an almost-tango, is easily the most romantic piece in the program. It’s sweet to learn that Martin wrote this for his wife. And there’s a wistful sense of place woven into the main theme and love duet written for Dylan Thomas’s radio play Under Milkwood. With harp and strings Martin paints a true Welsh dreamscape.

The program finishes with seven chorales, a prelude, and two interludes written as sketches for the soundtrack to the 1986 film The Mission. Scheduling problems forced Martin to hand over the soundtrack to Ennio Morricone so the sketches remained only sketches until he wove them into a concert piece, first performed in 2008 but never before recorded. Martin’s melodies seem to hearken back centuries, entirely in keeping with the untamed setting of the film. The gorgeous Chorale 2, in particular, is informed by English folk and liturgical melodic shapes, expressing as much joy as supplication. In Chorale 6 the solo soprano floats above those cellos again, with Leon’s direction ably expressing Martin’s exquisite sense of balance — such a powerful harmonic and textural supporting structure for the vocal lead.

It’s also a fitting finish to a program that invites many listenings and a pleasant curiosity as to whether there might be a second production showcasing more unknown or forgotten George Martin works.

Albany-based Danny Carnahan has been performing folk, pop, and traditional music on various stringed instruments for 40 years and has been writing music and writing about music for 35 years. For more information, visit his website.

It Was 50 Years Ago Today